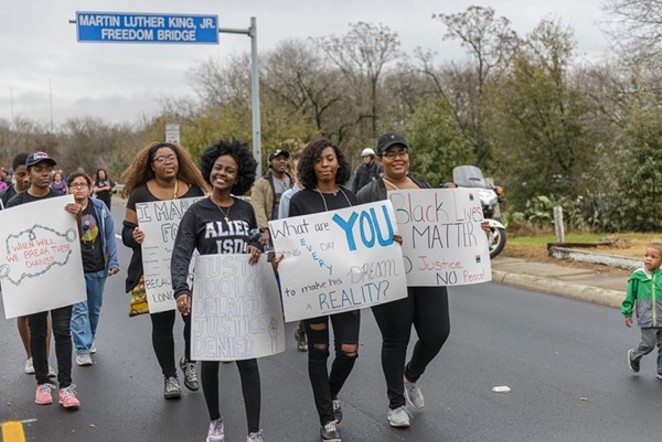 Jamie Monzon
Jordan Maney is a San Antonio event planner focused on representation of people of color and the queer community in the wedding industry. She is also the founder of keepHer, a social group for women of color in San Antonio


I was leaving Rosario’s when I saw them, a bubbly black couple ... in Southtown. What?! Our eyes met and we almost broke into the hand clapping game Celie did in The Color Purple. We laughed. We talked. We exchanged contact information. It was kismet, serendipity, almost something out of a ’90s rom-com. The conversation was flowing and I eventually asked them what part of town they lived in. They shook their heads.

“We’re only here for a conference. But what’s up with this place? Are there only like, two black people here?”

No — but it definitely feels like it. San Antonio is a huge town that after decades of redlining practices has remained largely economically and racially segregated. As much as the Eastside is branded the “black” side of town and is the historical center of blackness in San Antonio, it's not the only place we are. But why is it so hard for some of us to find each other?

It’s one of the many conversations I’ve had with other black transplants for the past two years. I don’t have the roots that it seems a lot of native black San Antonians do. I love San Antonio, I do. But the sense of disconnect and isolation isn’t something I made up in my head. It’s a constant talking point when I happen to not just be the only black person in the room. Many of us decide to leave, a few decide to stay. I’m somewhere in between.

The common reaction to criticism about this city are usually met with, “well, leave then!” The city is serving some people well, and that's great. But a lot of the time it seems that “well” is confused with “well enough.” The city could be better for the people who’ve been here and the people who actually want to contribute positively to the city. I’m not talking about criticism from casual passersby. I’m talking about politicos, journalists, artists, business owners, medical practitioners, lawyers, and other professionals who want to pour their resources into this city. You know, the kind of boon San Antonio seems to salivate over from old money in Austin and Dallas but seems averse to building in our backyards ... but that's a conversation for another piece.

In September I co-organized a benefit show with a friend who’s a local poet. We had an interesting mix of talent but the thing most surprising was how many black artists who were legitimately good, like DFOY music or Dre Levelle, had never been featured in the showcase put on by the Current or connected with local music writers or venues that actually support local talent.

Again, I get it. The bigger bands we do have will always turn a bigger profit — but it can’t keep being the same four bands every time. That's not going to change so long as San Antonio doesn’t show up for local musicians because venues won’t see the reason to change it if we don’t show up. There shouldn’t be a huge reserve of undiscovered & underfunded talent in San Antonio’s black community, but there is. I’ve counted far too many friends with talent and grit who leave San Antonio for greener pastures and go on to make those pastures much greener. How many more people do we have to lose before we cultivate an environment where they can flourish?

San Antonio has an established black social order for those born and raised here, particularly for those that go to church. But black folks under 40 want more than that, we deserve more than that. I’ve gone to many of the older black churches in this city. I’ve seen some of them die out. The traditions and stories of their members largely left untold; not passed on for future generations to venerate and rely on. I’ve seen the disconnect of ridiculously talented black kids from Sam Houston, from Fox Tech, from Judson who never hear the words, “You are great,” in their classrooms from the ages of 5 to 18. I’ve watched generations bicker about how to approach social issues that affect all of us instead of uniting across sexual orientations, religions, and ages to stand together in the fight for change. I’ve watched areas slowly “redevelop,” pushing out families who’ve been here for a new, more “profitable” demographic. I’ve watched the Eastside continually be pimped out as something to profit off of or cast aside as a problem by politicians unwilling to listen to the solutions offered by its residents. I’ve watched the faultline-like division between black and brown communities create incendiary reactions that further the divide. These issues are not going to go away overnight.

Before you assume I’ve just passively been observing this, let me explain how I’m actively trying to change it.

I started a social group called keepHer for women of color for this very reason. There’s always been a huge disconnect amongst black women and Latinas. It’s like we’ve been pitted against each other in a race no one actually wants to win. Even as both groups have made amazing contributions to the city’s landscape internally, the opportunity for dialogue and engagement has been limited to zero.

I hosted a panel exclusively of women of color at last year’s DreamWeek and the response was overwhelming: We want more of this. I put on a mental health forum for that same group with the Movement Gallery and it’s been met with the same response: We need more of this.

We are hungry for opportunities to connect and grow and I’m encouraged by the work I’ve seen people like Franque Michelle put in with the Black Writers Group, the work Kinyo Laditan puts in with his weekly late night show, “Go Live with Kinyo,” with the work local poets like Andrea “Vocab” Sanderson, Six Gawd, and Glo Armmer put into poetry events like 2nd Verse. I see us. We’re trying to make it work with little to no support and often no resources.

I also understand the frustration with and suspicion of outside groups. Media outlets that don’t reach out to the community to tell the story correctly, institutions and politicians that show up for the photo-op but not the work, figureheads that are all too willing to forgo the people that got them there once the check clears, the list goes on. I get it. But it’s time to connect the dots. The Current, the Rivard Report, the Express-News, they need black voices telling our stories. Geekdom, Launch SA, and the Women’s Business Center need black business owners and startups telling their stories. City Hall is in desperate need of black San Antonians to tell our stories. Why? Because it makes no sense for there to be such a wealth of untapped brilliance and not have it celebrated. Our perspectives are important. Our ideas have merit. Our contributions are vital.

So allow me to make some introductions. Here is a list of musicians, business resources, writing contacts, social organizations, black-owned businesses, and other entities that support (and are led by) black San Antonians. Black people have always been a part of the culture of San Antonio. We’ve always been here. We will continue to be a part of its legacy. If this city is on the rise, we’re rising right along with it. We have too much to offer to be left behind.