After voicing complaints about the team last week during a podcast appearance, the Atlanta Hawks guard continued to criticize it on Instagram over the weekend. 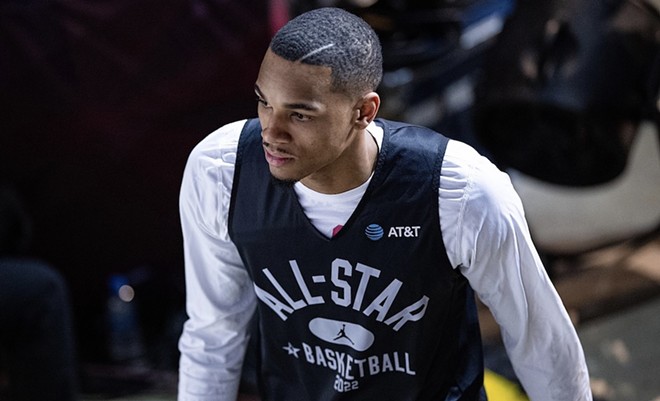 Wikimedia Commons / Erik Drost
On Saturday, former Spur Dejounte Murray stood by his disparaging remarks towards the Spurs organization made during an appearance on a podcast hosted by retired basketball star Stephen Jackson.
Former San Antonio Spurs guard Dejounte Murray is once again throwing fans of the Silver and Black into a fit of rage.

After a voicing complaints about his one-time team last week during a podcast appearance, the Atlanta Hawks guard continued to criticize the organization on Instagram over the weekend.

Murray's sniping at the Spurs began Thursday after he trashed the Silver and Black on the All the Smoke podcast, hosted by another controversial former Spur, retired NBA star Stephen Jackson.

"They bring in a point guard from Argentina that's close with Manu, playing in front of me," Murray ranted on the podcast about his lack of playing time. "Mind you, I'm behind Tony, Patty. But they playing these mind games, they tryna see if they can break you."

Murray, who eventually took the starting position from Tony Parker during the 2017-2018 season before being traded to Atlanta last year, was also critical of Parker's performance and sportsmanship. During the interview, Murray said the Spurs would have won more championships if Parker had been a less selfish player.

After Spurs fans reacted negatively to Murray's comments, he doubled down during the weekend.

"Never said nothing bad but the truth and left out 95% of stuff that would really have yall second guessing who you are cheering for," Murray commented on a post on the Spurs Memes Instagram page.

Needless to say, Spurs fans were quick to react to his latest comments.

"This gen is mentally weak," Instagram user @captlouruns replied to Murray's comment on the post. "Why most these guys will have a few or couple good years then fade away."

"Never liked him as a spur or not," @85kittt said. "He lacks the leadership."

Although most commenters felt that Murray's comments were childish and unsportsmanlike, a few agreed with the NBA All-Star.

"No lies told. Not mad at DJ at all; it's a business," @yourdrunkensage commented. "They are not your friends — how many players thought they'd be on a team for life and got traded."

Murray and the Atlanta Hawks will be in San Antonio on Sunday, March 19 for a matchup against the Spurs at the AT&T Center. Tickets are on sale now.