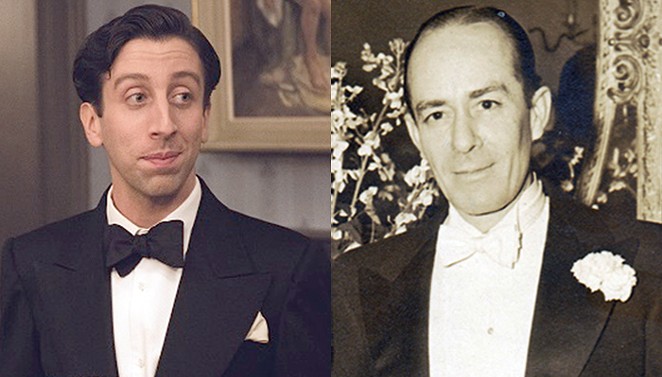 Courtesy photos
Actor Simon Helberg (left) portrays late piano accompanist and composer Cosmé McMoon in the film Florence Foster Jenkins.
As a kid, actor Simon Helberg (TV’s The Big Bang Theory) didn’t need anyone to tell him he wasn’t going to make it to the NBA.

“I was afraid of the ball,” Helberg, 35, told the Current during a phone interview last week to talk about his new film Florence Foster Jenkins. “I realized maybe I don’t belong in the basketball world. But some people never realize. It’s a rare circumstance to be terrible at something, but somehow become very accomplished at it.”

Such is the case with the title character Florence Foster Jenkins (Meryl Streep), a New York City socialite, music advocate and amateur opera soprano, best known for building a singing career despite her lack of actual singing talent. In the film, Helberg plays Cosmé McMoon, Jenkins’ piano accompanist who spent part of his childhood and the last days of his life in San Antonio. McMoon passed away in 1980 after a battle with pancreatic cancer. He is buried at Sunset Memorial Park on the city’s northeast side. 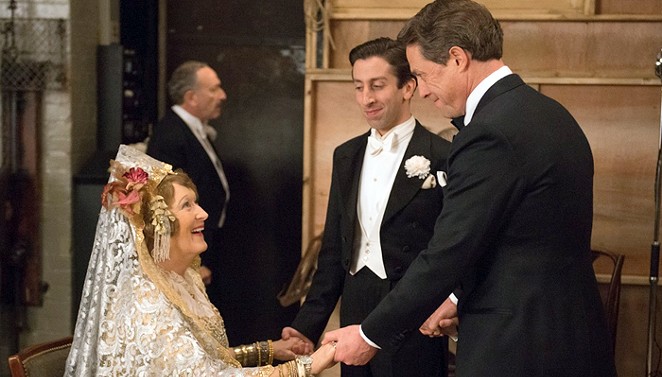 Courtesy
Meryl Streep, Simon Helberg and Hugh Grant share a scene in Florence Foster Jenkins.
During his research to portray McMoon, Helberg said it was difficult to find information on the Mexican-Irish American composer and pianist. Instead, he decided to focus on studying “the music of New York in the 1940s” and polishing up on his classical piano skills. It was actually McMoon’s uncharacteristic interest in bodybuilding that Helberg found the most fascinating.

“I thought maybe he was gay, but didn’t know,” Helberg said. “I though maybe he just enjoyed looking at these muscle magazines and looking at these guys lift weights. For me, that was a huge indicator of his innocence. I just saw the character so clearly in my head.”

It was a character, Helberg said, who shared a special connection with Jenkins. Although McMoon knew the limits of her singing ability, he, like many others, did not express their true opinions to the tone-deaf songstress. Helberg doesn’t think it was necessary, especially since it wasn’t a “detrimental” situation for anyone.

“Ultimately, what difference does it make if she is just blissfully unaware?” Helberg said. “What does it really matter if there is a disparity between what she thinks she is projecting and what she actually is? The joy she had when she sang and the joy she brought to people was very infectious.” 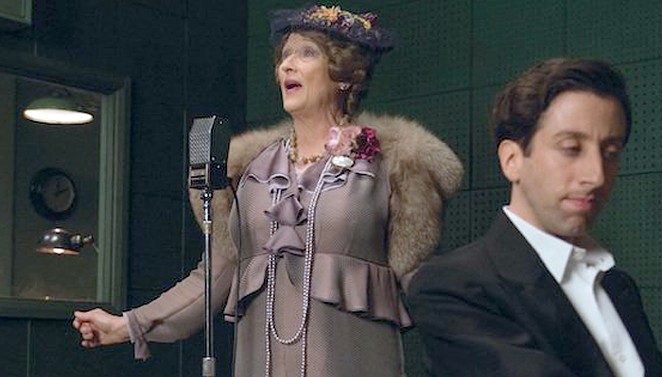 Courtesy
Florence Foster Jenkins (Streep) records a song at a studio with her accompanist Cosmé McMoon (Helberg).
Helberg admits, however, that’s not exactly how it works in Hollywood. If you’re not good at what you do, someone is bound to let you know…most of the time.

“But you pay a lot of people to tell you good things, too,” he joked.

As for working with three-time Academy Award winner and living legend Meryl Streep, Helberg points to one of his favorite scenes in the film where McMoon and Jenkins play a duet on the piano.

“I remember reading [the script] for the first time and thinking, 'Wow, if I get this role, that will be my hand and [Meryl’s] hand on the piano,'" Helberg said. “That scene meant a lot to me because it was a very poetic and intimate moment.”