Jaime Monzon
Launched in 2008 by then-Mayor Phil Hardberger, Luminaria was initially presented as the Alamo City’s response to multidisciplinary nighttime art festivals in Europe, namely Nuit Blanche in Paris and Noche Blanca in Madrid. Over the years, the illuminated event has evolved considerably in scope and focus while adapting to fit — and expand — into footprints in Alamo Plaza (2008-2010), Hemisfair (2011-2013), different pockets of River North (2014-2015) and Dignowity Hill (2016).

While Luminaria’s nomadic tendencies have kept the overall experience fresh (even unpredictable), attendees and participants alike seemed relieved and excited when the festival announced a return to Hemisfair in 2017. More familiar to the masses than Dignowity Hill and easier to navigate than the corridors of River North, Hemisfair has also transformed considerably since Luminaria’s inception. A memorable example, Yanaguana Garden proved a charming stage for performances by the likes of Seattle-based Esther de Monteflores, whose eccentric piece Tiny Cities involved both tightrope-walking and romantic interludes with a human/pigeon hybrid. Despite continued construction that’s currently making the park tricky to navigate, Hemisfair is set to host Luminaria's next few chapters as well. At a media event held this week at the Mexican Cultural Institute (MCI), Luminaria Executive Director Kathy Armstrong announced that the festival has entered a three-year partnership (starting this year and ending in 2020) with Hemisfair and many of its key venues, including the MCI, the Universidad Nacional Autónoma de Mexico (UNAM), the Convention Center and the Magik Theatre.

When Armstrong stepped in as executive director in 2015, she made two key 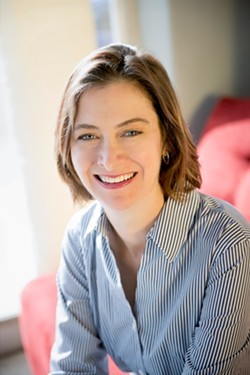 Kathy Armstrong by Sarah Brooke Lyons
changes to the way Luminaria comes to fruition each year: the reinstatement of an open call for artists (proposals are being accepted now through May 15 at publicartist.org, guidelines at luminariasa.org); and the addition of a six-member Artistic Advisory Committee designed to change each year. Rebranded this year as a Curatorial Committee, the 2018 group is comprised of Alana Coates (independent curator and associate director of Ruiz-Healy Art), Agosto Cuellar (fashion designer, social activist and DJ), Adriana Flores (vice president of Alamo Music Center), Mark McCoin (performance/sound artist and head of UTSA’s New Media program), Andrea “Vocab” Sanderson (poet, spoken-word artist and hip-hop vocalist) and Guillermina Zabala (filmmaker and media arts director at SAY Sí).

Scheduled for Saturday, November 10, Luminaria’s 11th chapter (an official Tricentennial event) will be complemented by a public art program showcasing the work of a single artist at Mission San José. Also to be determined via open call, the artist selected for the Mission San José Interpretive Arts Program will be vetted by a separate Curatorial Committee that includes Cuellar and Zabala as well as Carrie Brown (public art curator for the San Antonio River Authority), Lindsay Compton (volunteer coordinator for the National Park Service at San Antonio Missions Historical Park) and Patrick McMillan (founder of the multifaceted firm Toxey/McMillan Design Associates). 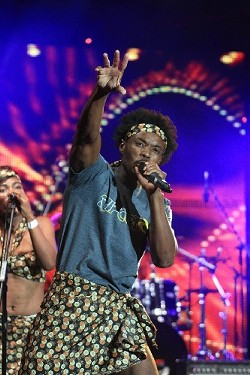 Offering a bit of a teaser of all that’s on the horizon, Luminaria will join this weekend’s ¡Viva Hemisfair! festivities by welcoming Namibian reggae/jazz fusionists Castro Etondo for a free concert on Hemisfair’s Main Stage. Based in San Antonio’s sister city of Windhoek, Namibia, the band will be making their first-ever U.S. debut at Hemisfair.