'Tangible/Nothing' is the contemporary art space's second full-fledged exhibition and its first to be curated by Ruby City Director Elyse A. Gonzales. In the fall of 2019, San Antonio got a new cultural landmark in Ruby City — a world-class contemporary art space dedicated to showcasing the sprawling collection of late local artist, philanthropist and Artpace founder Linda Pace, who died in 2007.

Four months after opening the impressive inaugural exhibition "Waking Dream," Ruby City welcomed Elyse A. Gonzales as its new director. Three weeks after her arrival, the institution closed its doors at the onset of the pandemic.

"We were closed for about 16 months," explained Gonzales, who relocated to San Antonio after serving as acting director of the Art, Design & Architecture Museum at the University of California in Santa Barbara. "As frustrating as that was for all of us, it was a great moment to be able to spend time getting to know the collection. ... And in doing that, I was really struck by [how] many works of art incorporate mundane materials that we see in our everyday life."

During that deep dive into the Linda Pace Foundation's collection — which encompasses upward of 1,400 paintings, sculptures, installations and video works — Gonzales identified a secondary theme: absences, erasures and voids. The missing elements among the works of art eventually led Gonzales back to Linda Pace herself.

"I remember thinking ... this makes me think of Linda Pace," she recalled. "Because Linda Pace is such a presence in our life here — the way we think about our mission, and just as our founder in general. But also, of course, she's not here."

Those three distinct threads — use of commonplace objects, erasure or absence, and Linda Pace's legacy — formed the germinating seed for "Tangible/Nothing," Ruby City's second full-fledged exhibition and its first to be curated by Gonzales. Opening Thursday, Sept. 8 and on view through July 30, 2023, the exhibition brings together roughly 40 works by local, national and international artists.

During our preview of "Tangible/Nothing," Gonzales expanded on the exhibition's thematic framework, explaining that her initial three threads tap into other themes ranging from memory and mortality to gender and race. While the assembled works can stand on their own, awareness of these crisscrossing threads only adds to the experience — there's a fair amount of interplay between objects and even some "secret" themes to uncover. 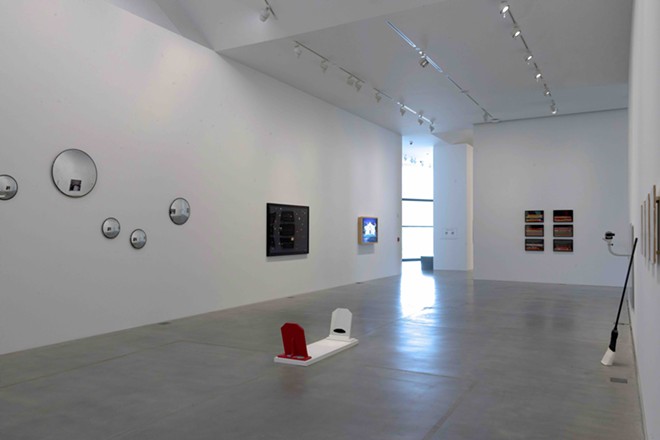 Photo by Ansen Seale, courtesy of Linda Pace Foundation, Ruby City
"Tangible/Nothing" will be on view at Ruby City through July 30, 2023.

In keeping with "Waking Dream" before it, "Tangible/Nothing" does a commendable job of showcasing San Antonio artists. Providing something of a double whammy, a duo of heavy hitters exemplifies the exhibition title by uplifting everyday materials into the fine-art realm while unwittingly evoking a sense of absence.

In his all-too-short career, San Antonio art star Chuck Ramirez (1962-2010) celebrated the mundane and alluded to the fleeting nature of life in stark photographs of beat-up piñatas, empty candy trays and wilting bouquets.

For one of his earliest projects, Ramirez glued thrift-store tchotchkes to Styrofoam meat trays, shrink-wrapped them and priced them with equipment available to him through his day job as a graphic designer at H-E-B. Propped up on a shelf, two of these Ramirez relics — Plastic Bambies and Plastic Meanies — serve as poignant reminders of the late local legend's unique talent and wicked wit.

During her 2006 Artpace residency, Delaware-born San Antonio artist Katie Pell (1965-2019) transformed domestic appliances into electrifying sculptures modeled after lowriders. For obvious reasons, her pink-and-purple Bitchen Stove will unfortunately not be spitting flames at Ruby City, but still, it commands a dramatic presence as one of the boldest and most vibrant pieces in the show. 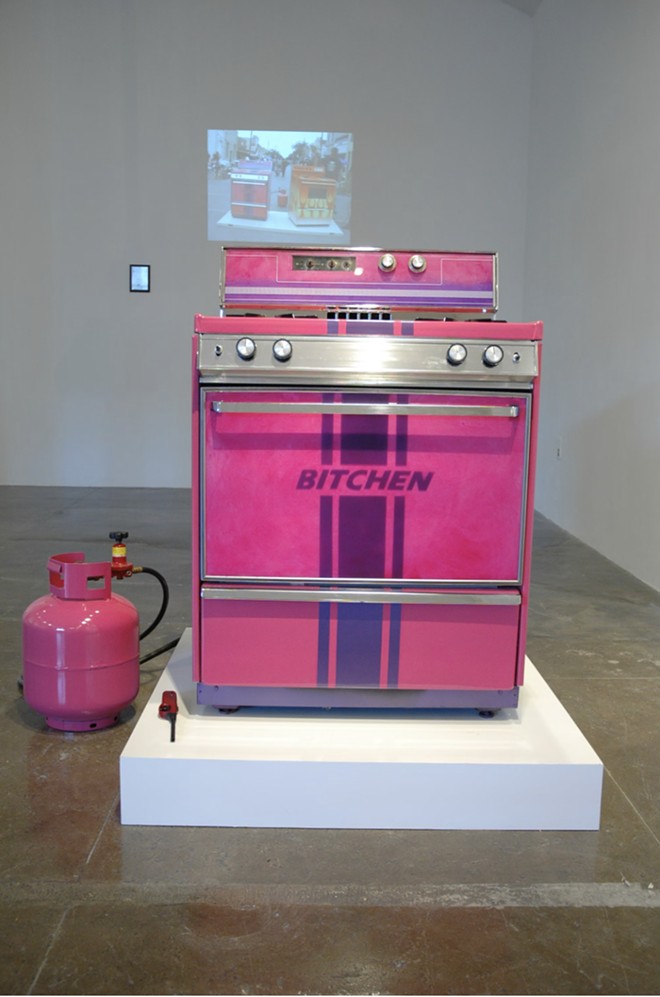 Searching for the "nothing" referenced in the exhibition title could make for a fun exercise at Ruby City. There's an all-white painting by Daniel Joseph Martinez, a suite of wonky, white wooden panels by David Cabrera and ghostly, barely there rubbings on Japanese wax paper by Mona Hatoum. But the works that deal with the intentional removal of subject matter have a more immediate allure.

Projected on a wall in a format that recalls the tiny portable TVs of yesteryear, Paul Pfeiffer's 2003 video Miss America entailed the New York-based artist painstakingly erasing the pageant queen's body from a televised appearance, leaving only her crown bobbing in front of a publicity backdrop.

And with a title that almost says it all, Jim Mendiola and Ruben Ortiz-Torres' 2001 lightbox Tejano Dream/David Copperfield Visits the Alamo sees the Los Angeles-based artists "disappearing" the controversial landmark with the low-tech trickery of a 3D postcard.

"It's kind of playfully [presenting] the idea that if the Alamo were to disappear, all this problematic history and the racist rhetoric that's surrounding it would also disappear too," Gonzales said of the piece.

Visual reminders of Linda Pace abound in "Tangible/Nothing." Her left eye stands watch over the galleries in San Antonio artist Nate Cassie's 1998 composite photograph Eyes. She can be seen gazing off into the distance in local artist Juan Miguel Ramos' 2003 print Linda. And her bright orange Louis Vuitton handbag is splayed open for all the world to see in Chuck Ramirez's 2005 "purse portrait" Louis (Linda).

But the less obvious references to Pace are perhaps easier to get lost in. San Marcos-based artist Adam Schreiber's photographic series July 2011 depicts Pace's loft-like home in a stark fashion that almost glows with ethereal light. Offering a visual echo of sorts, some of the artwork shown in the photos is on display nearby in "Tangible/Nothing."

Based between New York and Berlin, Nina Katchadourian has been staging photographs of book collections since 1993 and was invited to capture Pace's in 2002. Mixing books from her public and personal shelves, Katchadourian photographed the spines in a way that suggests poems or haikus. One reads, "Cinderella / Four in the Morning / Dreaming / Stretching / Recovering / Waiting." While there are several pieces in "Tangible/Nothing" that have never been exhibited locally, two of Ruby City's recent acquisitions stand out for visual wow factor and timely subject matter.

"Dominoes is a game that for him represents this idea of community in the Black neighborhood where he's situated," she said. "[And] mapping played a formative role in his leadership of Project Row Houses. As director, he was always looking at maps — city maps, development maps — to understand what was happening in the neighborhood and helping to either protect the neighborhood from gentrification or to help out other individuals in the community as a result of that."

Taking up a significant portion of a wall upstairs, artist duo Ericson and Ziegler's 1991 installation High Gloss delivers on the exhibition's "tangible" angle by assembling 80 empty paint cans from Benjamin Moore's "historic" series along with a glass plaque etched with their corresponding color names.

"As you begin to look through the names and the places that are mentioned, the associations that are drawn are all related to a very narrow conception of American history, which is mostly Anglo European — and certainly male," Gonzales said. "Their work really highlights the question that we are still wrestling with today: what about the rest of history? What about everybody else's vision of American history and their place in it?" Admittedly, Gonzales had numerous goals for "Tangible/Nothing." And the exhibition even divulges sub-themes upon perusal. For starters, mirrors are used to great effect in pieces by New York-based artists Teresita Fernández and Milagros de la Torre, as well as San Antonio's own Nate Cassie, whose simply titled 2014 sculpture Mirror seems poised for high-concept selfies.

Gonzales also selected specific pieces she felt would highlight or activate aspects of David Adjaye's distinct design for Ruby City. One such piece is Chicago-based Iñigo Manglano-Ovalle's 2004 sculpture Cloud, which Gonzales hung directly below a skylight in a long stairwell. After climbing those stairs, viewers will undoubtedly notice San Diego-based artist David Avalos' 1995 sculpture The Bullet-Proof Piñata dangling from the ceiling.

"It's so great to be able to discover this thing that we see all the time, especially in San Antonio, but done in this entirely different way," Gonzales said. "For [Avalos], it's really about how Latino people often have to arm themselves in their daily experiences ... and talking about the kind of treachery of racism and the biases that they encounter."

Importantly, it's the only piece of art on a narrow landing and doesn't obstruct the view through a large window. Through that window, one can see the Camp Street building where Linda Pace lived, Chris Park — a serene green space dedicated to her late son Chris Goldsbury — and the San Antonio skyline.

"David Adjaye talks about this as a biographical window of Linda," Gonzales said. "So I wanted to leave this focus available."