One Man, Two Guvnors and Cross-dressing in Frothy Farce 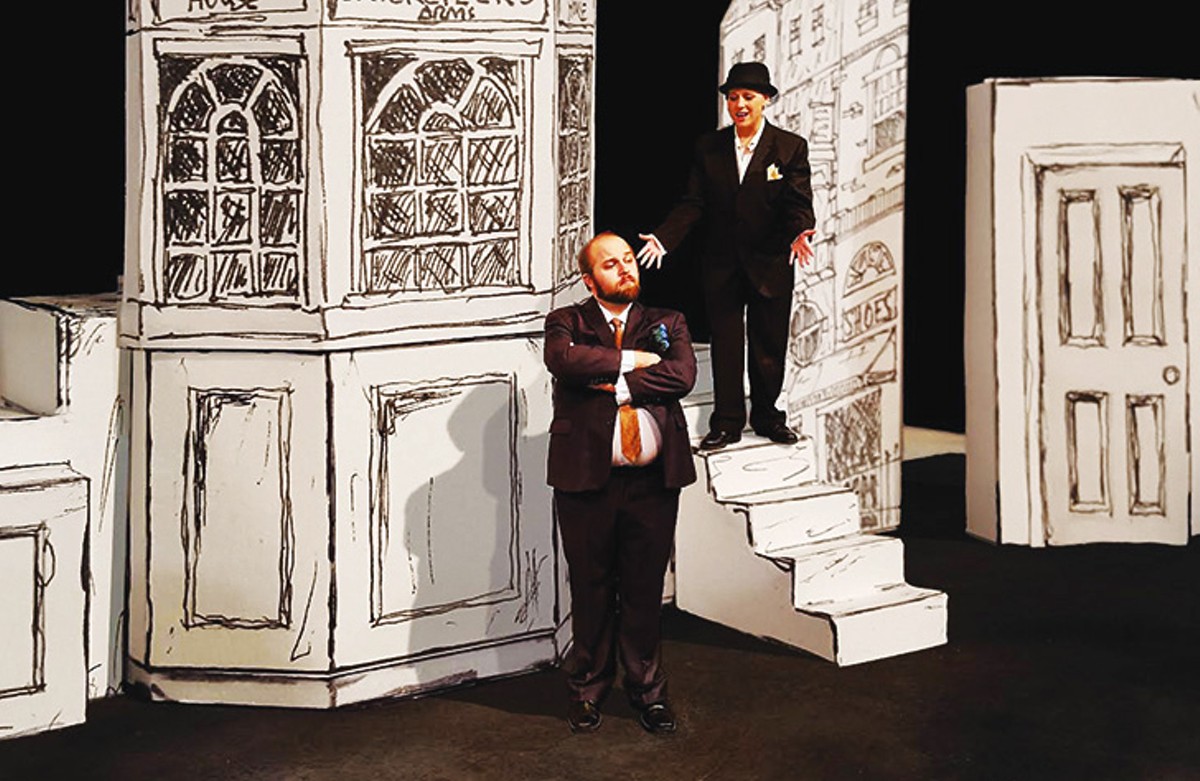 In British slang, "guvnor" means master, especially of a social inferior. To be a Servant of Two Masters, as Venetian playwright Carlo Goldoni titled his 1746 comedy, is to be doubly distressed, particularly if the servant faces dire consequences if either master learns of the other. In One Man, Two Guvnors, his 2011 adaptation of Goldoni's Il servitore di due padroni, English playwright Richard Bean transposes the action to Brighton, England in 1963. The contemporary American actors who don mod clothes and affect British accents in director Ken Frazier's zestful production currently at the Vex are spoofing a spoof of a spoof.

Francis Henshall is the one man who, in order to feed an insatiable appetite that compels him to gobble everything in sight, including a letter from the post office and a scrap of cheese in a mousetrap, agrees separately to serve two guvnors. Meanwhile, Stanley Stubbers is forced into hiding after fatally stabbing his fiancée Rachel Crabbe's twin brother. In order to obtain desperately needed cash, Rachel disguises herself as her dead sibling Roscoe. What ensues is a barmy salmagundi of mistaken identity, cross-dressing, frustrated love, thuggery and muggery.

This is a playful play about playing, one that reduces the fourth wall to gaudy rubble. Audience members are spoken to directly and even conscripted into speaking back and playing the tambourine. The lines between actor and spectator are so uncertain that many on opening night assumed that a noisy woman working her cell phone was a plant. She was just an obnoxious Spurs fan distraught over the team's loss. The plot is pure piffle, and the characters, derived from the Commedia dell'arte, are stock figures. As ravenous and obsequious Francis, Joshua Goldberg throws his considerable weight around in almost every scene. He meets his match in Sara Brookes' fleshy floozy Dolly. Erin Polewski is doubly effective as Rachel/Roscoe, and Ben Scharf's Stanley is an elegant reprobate.

The energy of the flashy cast never seems to falter, though, at just under three hours, Richard Bean's ball loses some of its bounce. However, gifted musicians Ron Krays, Fingers McGillicutty, Philippoussis Tench and Reggie Thick — two on guitar, one on bass and one on washboard — return frequently to keep the entertainment entertaining.

The greatest comedy tickles the belly but pierces the soul. With its abundance of physical shtick (a clobbering with a cricket bat, a hair piece singed from flambéed crêpe suzette, a joyful fart) and recurring jokes about Australia as the land of "lager, barbecues and opera," One Man, Two Guvnors contents itself with being a frothy farce.