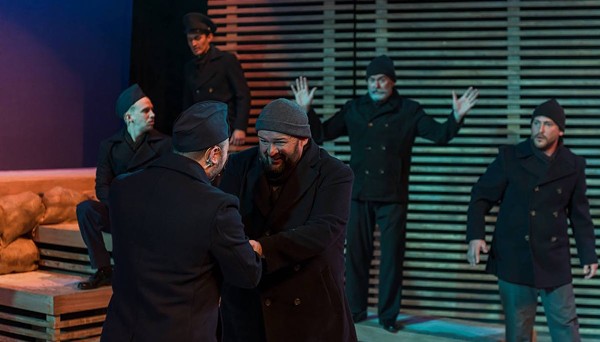 Courtesy of The Public Theater of San antonio
Christmas Eve, 1914: Hunkered down in the trenches, British soldiers heard something unusual – instead of exploding shells, strains of the carol “Stille Nacht” began to cross No Man’s Land as German soldiers sang to mark the holiday. Soon after, soldiers began to lay down their weapons and cross into No Man’s Land. They exchanged gifts of food and tobacco, sang together, and even buried each other’s dead.

Styled as a radio musical drama, All Is Calm tells the story of the Christmas Truce through the words of those who were there, using text from “letters, journals, official war documents, poetry, [and] grave stone inscriptions” among its sources. The Public Theater’s production features San Antonio’s all-male a capella group The Marcsmen, and for anyone looking for an extra dose of holiday cheer, a special double feature of All Is Calm and All is Bright: Christmas with the Marcsmen will run on December 14 and 15.