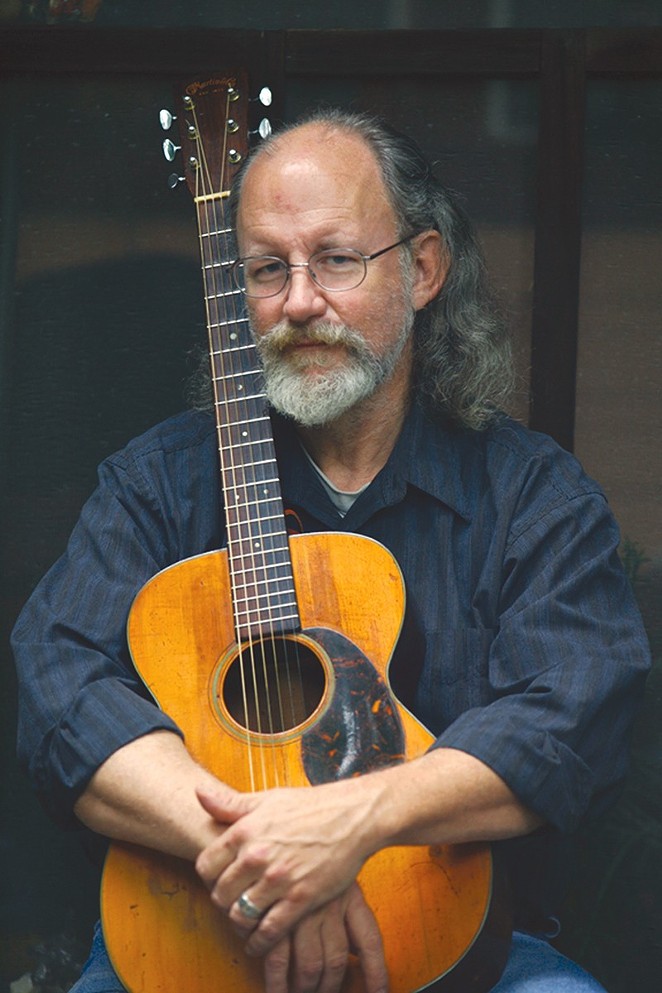 Courtesy of Wings Press
Last Wednesday (May 9), in a widely shared Facebook post, Hailey Laine Johnson, a 31-year-old artist from San Antonio, accused poet and Wings Press publisher Bryce Milligan of having sought and fostered an inappropriate relationship with her during the 2001-2002 school year, when she was a 14-year-old freshman student of his.   Johnson’s original post states that Milligan, in her view, recruited her to go to North East School of the Arts (NESA) — a magnet high school in North East Independent School District (NEISD) where Milligan led the Creative Writing program — with ulterior motives.   Johnson says Milligan “sequestered [her] from [her] classmates with a ring of privilege” and “wrote [her] songs and poetry about [her] breasts and [her] virginity.”

Milligan, she says, would have her call him every night at 2 a.m. and tell her that he wanted to leave his wife for her. Milligan “kept [her] in a careful web of extreme adoration and reverence tinged with guilt, shame, and above all, complicity,” Johnson says.

She says he would kiss her neck, call her his muse, and have her sit on his lap, sexualizing her in a way that made her feel alone and insecure. He preyed upon her youth, she alleges, and manipulated and controlled her through the power he held over her and trust she had for him.   After these allegations circulated on social media, more people began to talk. Johnson posted (again to Facebook) a screen shot of a seeming, though incomplete, apology that Milligan sent her late at night on May 9 via Facebook.   In the screen shot, Milligan wrote that he was “very sorry for what happened” and that he’d “rarely set foot in the classroom since because of it.”

“I don't deserve it, but I would ask for your forgiveness,” he continued, seeming to insinuate acknowledgement that his treatment of Johnson was vastly inappropriate.  Via email, Milligan told the Current that “Ms. Johnson writes a compelling narrative, and she can be very persuasive, but it is mostly fictional.” He noted that he had “taught literally thousands of students with no accusations of any misconduct other than the one in 2002,” and asked that we consider this fact and his reputation in the literary arts community as evidence that he was innocent of the things for which he stands accused.   In another statement, issued Friday, May 11, Milligan offered the following:

“I do not believe that blaming the victim is ever the proper approach to allegations of abuse. However, these recent allegations — which have been made against me by Ms. Johnson — affect my personal and professional reputation. Thus I must defend myself. I never had nor tried to have a romantic or sexual relationship with Ms. Johnson. I never harassed or stalked her and I have never interfered with her career or used any of my professional relationships to hinder her success as a writer or artist in any way.”

He went on to say that his resignation had to do with the fact that his open-access policy — allowing students to call and email him at all hours of the night in order to foster their creativity — was drawing negative attention toward him and “it was negatively impacting the progress of the course [he] taught.”

At some point in the second semester, with Johnson suffering under the emotional distress of the situation — she reports her “fingernails started to turn papery and [slip] out of their nail beds, [she] began having [her] first panic attacks, [she] became sickly — she went to then NESA principal Judith York who, according to Johnson, was dismissive of her claims.

York has since denied being dismissive, telling the Rivard Report’s Emily Donaldson that the only reason she wasn’t involved in the ensuing investigation is because the division of duties between Lee High School and NESA, housed on its campus, stipulated that such affairs be handled by Lee’s principal.

Eventually, an investigation was launched, but Milligan resigned amid swirling rumors before the investigation could bear fruit. NEISD spokeswoman Aubrey Chancellor confirmed to Donaldson that Milligan was under investigation, placed on leave, and marked for termination before he resigned.   Milligan, allowed to preserve his reputation by resigning, has since enjoyed high regard in both the San Antonio literary community and the broader Texas letters scene.

As folks in the San Antonio literary community and beyond have voiced their outrage at Milligan and support for Johnson, other people who were students at NESA at the time have come forward.   As of this writing, at least seven of these former students have corroborated Johnson’s claims, at least to some degree, to the Current and other media outlets. These individuals all mention Milligan referring to Johnson as his muse, having her sit on his lap, kissing her in the cheek, among other signs of an inappropriate relationship — which in themselves are misconduct.   Writer Eugene Fischer, who was a senior at NESA in the 2001-2002 school year, posted to his blog on May 11 about the allegations. “I wasn’t present for most of the events that Hailey describes in the post, but I had my own interactions with Bryce, ones that from an adult perspective are perfectly consonant with everything she wrote,” Fischer wrote. Fischer voiced support for Johnson and belief in her account. He wrote that, at the time, Milligan’s “social closeness with students went so far beyond the public high school norm that [Fischer] started to worry for him.”

Fischer wrote that he was angry at the time, because he didn’t want Milligan jeopardizing his position at the school, and thus Fischer’s chance to learn from someone he describes as “a cool teacher; a guitar-toting, Dylan-quoting free spirit who spoke to us with rare candor.” He said he confronted Milligan and told him that “hazy rumors of questionable behavior began to spread” and that he should knock it off. According to Fischer, Milligan said it would be worth it even if he did get fired.

Two other sources who were in the Creative Writing class with Johnson at the time, both wishing to remain anonymous, have corroborated the inappropriate nature of Milligan’s relationship to Johnson.   One of the sources said via email that Milligan “went out of his way to be physical” with Johnson, “having her on his lap, holding her and kissing her on the cheek.”

“It was obviously inappropriate behavior, but when you’re talking about someone with that kind of power and influence — both as a teacher and in the artistic community — the fear of backlash is very real, particularly the potential influence he held over our publishing possibilities.”   The other source explained via email that, “It was not a secret that she was his muse.”

“And, if you read his writing, his muses are usually sexualized.”

In addition, the person noted having “[seen] the favoritism, heard some of the songs, noticed the adoring looks…

“I don’t know if everything happened as [Johnson] is saying it did, but even if it didn't, the relationship was still inappropriate.”   Only two dissenting recollections, those of Claire Chilton, who was a senior at NESA during the 2001-2002 school year, and her mother Toni Mullins, a teacher who taught an English class two doors down from Milligan during his time at NESA) have emerged.

Chilton told the San Antonio Express-News that she believes Milligan “is not capable of doing the things that [Johnson] accuses him of,” claiming “it’s just not in his nature.” Both Chilton and Mullins say Milligan had a strictly platonic relationship with Johnson and other students, and that Johnson is lying.   As of this writing, it has been a week since the day these allegations first came out, and the literary arts community fallout has happened fast. Milligan resigned from the Texas Institute of Letters. He has been removed from scheduled events with the San Antonio Public Library. And writer’s organization Gemini Ink has removed him from his only reading that was scheduled with them, saying in a press release that the organization is “listening to [its] community and assessing how best to be present in these difficult times.”

The Artist Foundation of San Antonio, which awarded Milligan the City of San Antonio Department of Arts & Culture grant for literary arts (to the tune of $15,000) in February, decided at a board meeting on Tuesday that it would strip Milligan of his grant.

Board spokesperson Susan Heard delivered the following statement to the Current later that night:

“The Artist Foundation relies on our winners to be ambassadors of our mission: which is to grant qualifying artists working in Bexar County monetary support towards a specific project chosen by an international panel of judges. In the case of our most recent literary arts grant winner we do not believe that he can effectively execute the stewardship bestowed on him. Tuesday evening the Artist Foundation board voted to reallocate the returned funds. Our hope is that with this reallocation of grant money we can move forward and continue to execute our mission. The Artist Foundation is dedicated to preserving the integrity of our arts community.”

Authors and poets published by Wings Press, which Milligan has run nearly by himself for more than 20 years, started calling for Milligan to distance himself from the press almost as soon as these allegations began to be corroborated.

Poet Amalia Ortiz, in a Facebook post on Tuesday, said her latest book, which was forthcoming from Wings, had been cancelled by the press. She confirmed for the Current that she “was waiting to see if Bryce would step down as publisher as he stepped down from Texas Institute of Letters, when Wings Press sent [her] word [she] was cancelled.”

In the same post, which has been widely shared, Ortiz asked that Milligan step down from Wings Press “if he cares about the legacies of all the writers he has published over his career.”

It was just hours after that post when Wings authors were notified via an email from Wings Press that Milligan would step away from the press effective immediately, and that his wife Mary Guerrero Milligan and daughter Brigid Milligan would be taking over operations.

The Current has obtained a copy of that email. It states: “Bryce Milligan will be stepping away from his day-to-day duties managing and running Wings Press.”

“Since 1995,” the statement continues, “Wings Press has been a family-owned, independent small publishing house and going forward will be managed by Wings Press co-owners Mary Guerrero Milligan and Brigid Milligan. Wings Press continues to be dedicated to producing multicultural literature that enlightens the human spirit and enlivens the mind.”

Amid all this, there’s been no new word from Milligan himself since the May 11 statement of denial.