'Big Mike' Garcia has already become a critical part of the club's fabric, according to players and staff. 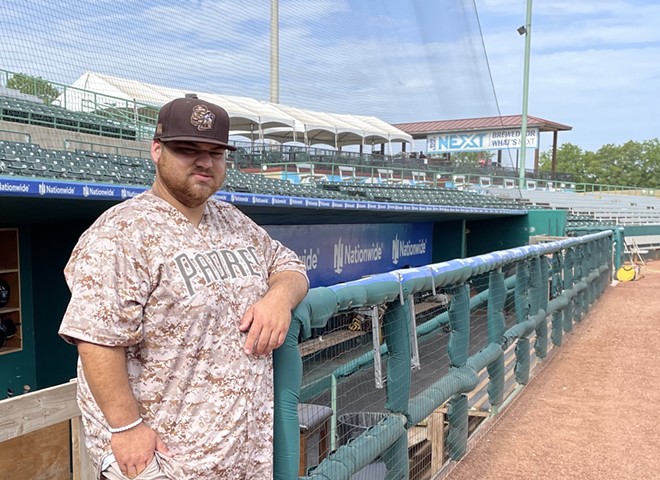 Tommy Escobar
"Big Mike" Garcia was a baseball fan from a young age.

The June sun beats down on Nelson Wolff Stadium as the San Antonio Missions get in some practice before a regular season game.

Music booms through the PA system, and the Minor League team's players spread out across the diamond, fine-tuning their skills.

In the dugout, batboy "Big Mike" Garcia overlooks the field like it's his own personal kingdom. A beaming smile suggests there's no other place the 31-year-old would rather be.

Garcia was a baseball fan from a young age, but born with a mental disability, he knew he'd face limitations pursuing a career as a pro athlete. That hasn't stopped him from bringing his contagious brand of enthusiasm to two Minor League teams.

The San Antonio native is in his first season as batboy for the Missions — his childhood dream job — and he's already become a critical part of the club's fabric, according to players and staff.

"It's all a good family here. I love it," Garcia said. "I was new here and didn't know anybody on the team at first, but I showed the team my hard work. Everybody started talking to me and congratulating me. They're like my family."

That camaraderie is clear during practice as Garcia hustles back and forth from the clubhouse, refills water coolers and whips up a batch of "Big Mike Special" Powerade. He's met with handshakes and fist bumps from every staff member, coach and player who crosses his path.

On game days, Garcia arrives at the stadium at 2 p.m. He stocks the fridge with water, brings out towels for the players, provides the game balls, hangs the umpires' clothes in their lockers and gets the field ready for his favorite part of the day: game time.

Although born in the Alamo City, Garcia's family later relocated to the Houston area, where he attended Clements High School and became batboy for its baseball team. He found his fit with the sport.

After graduation, he attended a job fair for the Sugar Land Skeeters, the Houston-area Minor League team later renamed the Space Cowboys. Through a program for hiring people with special needs, he landed a position as that club's batboy.

His nine-year tenure with the Skeeters came at an exciting time. He was part of championship teams in 2016 and 2018 and became such a fan favorite that the club created a "Big Mike" bobblehead in his honor. Earlier this year, Minor League Baseball's official website published a profile of Garcia, highlighting his enduring popularity in Sugar Land.

When he and his mother moved back to the Alamo City before the 2022 season, he reached out to the Missions, inquiring about bringing his skills to the team he'd grown up wanting to be part of.

Since landing the position in San Antonio, Garcia has brought his signature blend of energy and charisma to his hometown team, winning the respect of both players and fans.

"Whenever he goes out and grabs the bats or gives the umpires balls, the fans scream 'Big Mike' every single time he's on the field," Missions pitcher Thomas Eshelman said. "I understood the magnitude of how much he puts into this, and a lot of players come through here and know who 'Big Mike' is. So, it's good to see he gets a lot of recognition for who he is."

After each batter's time at the plate, Garcia sprints to retrieve the bat, waving his arms toward the crowd like a conductor with a symphony. He knows his job goes beyond picking up equipment.

Clearly, he knows his role as the spark plug that can ignite a dull crowd. Beyond that, he's the helping hand when a teammate is down, and ultimately, the reminder of why we love baseball to begin with, members of the club maintain.

"There are some days when we're down on the scoreboard, this guy [Garcia] goes out there and starts moving his arms and tries to get the fans going. I think they already love him here," Missions Hitting Coach Raul Padron said. "Outside of the field, he's a real humble person. [He's] always checking to see if you need anything, and I think it's important to have him around our players and our clubhouse."

"My next goal is actually to be signed to the Missions for the last game of the season and get an at-bat," Garcia said. "If not that, I'd like to be called up to the [San Diego] Padres and be a batboy for them. It would be a blessing to finally be in the show."