The hills and valleys are on full display as the youthful team struggles to figure things out. 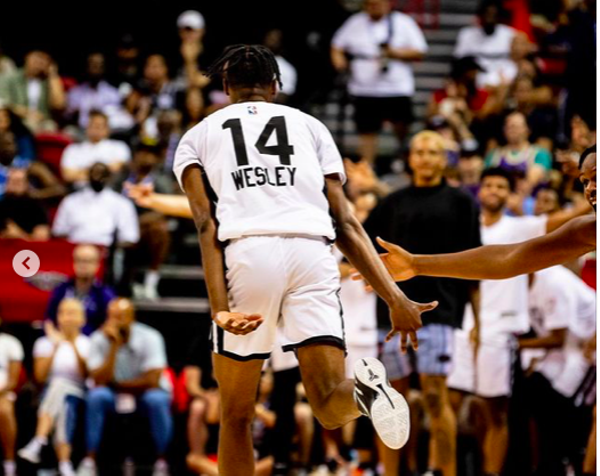 Instagram / @Spurs
Blake Wesley, the 25th pick and third first-rounder for the Spurs, put spectators on notice with his first two summer league performances.
The San Antonio Spurs' summer league team is off to a shaky 0-3 start, falling to Cleveland, Golden State and Houston.

That should come as little surprise, given the team’s lack of experience across its roster. Four of the Spurs' leaders in minutes are still 19 years old, and Jeremy Sochan, the team's prized 9th overall pick, was ruled out for the summer league after contracting COVID-19.

In the absence of Sochan, it’s clear the weight has been placed on the shoulders of rookies Blake Wesley and Malaki Branham.


Beyond that, there's no telling how players will respond to their first few games in summer league. The ebbs and flows of their individual development within their team isn't indicative of their talent, but they are worth following to get a sense of their strengths and weaknesses.

Blake Wesley, the 25th pick and third first-rounder for the Spurs, put spectators on notice with his first two performances, averaging 19 points per game. The Notre Dame alum has an ability to create his own shots with or without a defender in his face.

Even so, Wesley’s last-second turnover against Golden State stands out as a lowlight in the game the Spurs subsequently lost by one point. Despite delivering  stellar performances in his first two games, Wesley went 3-20 from the field against Houston on Monday.

Head coach Mitch Johnson appears to have given players including Wesley, Malaki Branham and second-year guard Josh Primo the green light to score at any given opportunity. However, the growing pains of their inexperience is increasingly apparent among the rookie guards.

Branham, a 20th overall pick, struggled from the floor in his first two games, averaging just over 10 points each with inefficient percentages. Improvement from the floor came against Houston, when he poured in a team high 20 points.

But to successfully assemble a fluid offense, players must be willing to find their spots and become a threat to defensive players. Once Branham can find his spots and capitalize on mismatches, he's likely to come alive.

Days remained consistent in his first two games with the Silver and Black. He’s proven the ability to play outside the paint and impact the game with his size and mobility. As evidence, he posted back-to-back double-double performances against Golden State and Houston.

The Spurs recently signed Barlow to a two-way contract for the upcoming season, and for good reason. His shot-altering length and defensive switchability may not reflect box score numbers, but his hustle alongside Days compliments the front court.