Rudy Herrera's 'The boy' and Lordy Rodriguez's 'Since We Last Met' will be on view from Jan. 12 through Apr. 30. 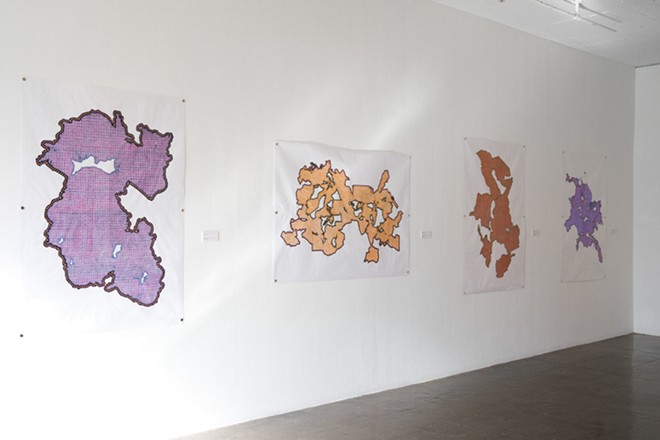 Dalia Gulca
Lordy Rodriguez's Pangea series.
Artpace is launching into 2023 with its two solo exhibitions for the spring: Lordy Rodriguez’s "Since Last We Met" and Rudy Herrera’s "The boy."

In the Hudson Showroom upstairs, Rodriguez, who participated in Artpace's International Artist-in-Residence Program in 2001, presents a selection of artworks he’s created in the 22 years since his residency. All of them look suspiciously like maps — albeit with duplicitous key differences.

His Pangea series, made on behemoth stretches of paper, hodge-podge the borders of different countries together to create mega-continents that haven’t, and will never, exist. The artworks slam together the shapes of varying locales, with interiors populated by chaotic swirls and scribbles or invented road systems.

Dalia Gulca
Rodriguez's pieces feature duplicitous cartography.
Some pieces frame pop culture within borders — like Untitled 825 Freeway Series 01 Poop Emoji and Untitled 843 and Freeway Series 08 Game of Thrones Family Sigils. Other maps take on the convoluted shapes of gerrymandered districts within the US, like Texas’s 35th.

While many of Rodriguez's works look like they’re printed, it’s a ruse — each “map” is uniquely hand-drawn and colored using Copic markers. Of his methods, he says, “There’s reasons I wanted it to look like a print version. If I can convince the audience that this is a map, and [yet] all the information is wrong, then that really says a lot [about] the information from institutions that we trust, because when information is wrong or incorrect, or purposely manipulated … we have to be diligent.”

In conjunction with his exhibition, Rodriguez is hosting an educator workshop at Artpace on Saturday, Jan. 14, from 10am-noon. The workshop is free and open to all educators.

Dalia Gulca
Like Herrera's public art, "The boy" is intended to reach a broad audience.
In the Main Space resides Rudy Herrera's "The boy." The exhibition is colorful, much like the artist's murals, which have come to adorn a number of buildings in San Antonio — from the Southwest Workers Union Building and the Historic Kress building to multiple establishments on the St. Mary’s Strip.

Much of Herrera's work honors his indigenous culture and his family, and "The boy" is no different. A commentary on fatherhood and ancestry along with his indigenous roots, the exhibition is geometric, stylized and cartoonlike.

Dalia Gulca
Herrera's "The boy" is on view in Artpace's Main Space.
Titled for the artist's son, "The boy" features a boy resting on a swing made from half of an H-E-B shopping cart. The other half is pushed by a depiction of Herrera, who is followed by a boardgame-piece-like generational file of cartoonized men reaching back to his indigenous ancestry. "The boy" features 2D and 3D elements that coexist in unity, made from a variety of materials including aluminum, foam, wood and acrylic. Like his public art, "The boy" is intended to reach a broad audience, especially those among Herrera's peers who may not initially gravitate to curated spaces like art museums and galleries.

The public reception for the two solo exhibitions will take place Thursday, January 12 from 6 p.m. until 8 p.m. The event is free and open to everyone.

The exhibitions will be on view 10 a.m.-5 p.m. Monday through Friday through April 30.