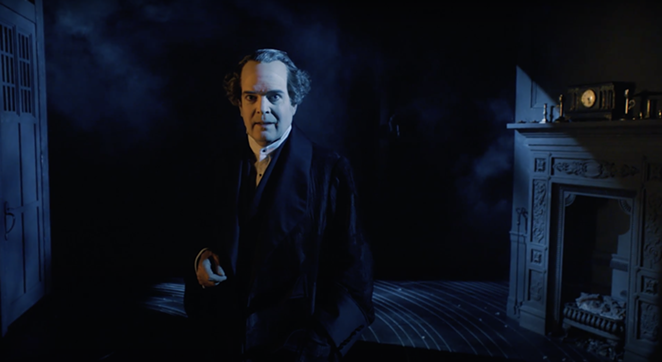 YouTube / Geffen Playhouse
Jefferson Mays in the 2018 production of A Christmas Carol.
Fans of Charles Dickens' classic holiday spook-fest have a chance to safely see a top-notch performance of the Christmas tale — and to support San Antonio theater while they're at it.

The Classic Theatre of San Antonio has partnered with TBD Pictures to present a recorded performance of A Christmas Carol, which was filmed at the United Palace theater in upper Manhattan. Tickets sales will support the Classic as well as other regional theaters nationwide whose coffers have been drained due to the pandemic.

The one-man show features Jefferson Mays as the miserly Ebenezer Scrooge and, well, pretty much everyone else. He'll reprise roughly 50 roles he originally took on for the 2018 premiere of the play at the Geffen Playhouse in Los Angeles. In that production, live audiences were confronted with the presence of a coffin and a jump-scare as soon as the curtains parted. Two-time Tony-nominated director Michael Arden kept things dark — literally — with Mays leaning in and out of different light to help distinguish characters and wading through clouds of fog.

In what now seems a prescient career move, Mays has made a name for himself in one-person performances on and off-Broadway, winning a Tony Award for 40 roles in I Am My Own Wife and a nomination for the nine roles he performed in A Gentleman's Guide to Love and Murder.

For this COVID-era production, the actor wore a mask and underwent frequent testing throughout the rehearsal process.

Once patrons have purchased a ticket they will have access to the performance for unlimited viewings within a period 24 hours at any time during its five-week run.