Bookmark This Now: Where to Find Great Sandwiches about Town

Not content with a tour of bánh mì and a handful of falafel, we penned a handy guide on where to find a solid selection of sandwiches in San Anto. 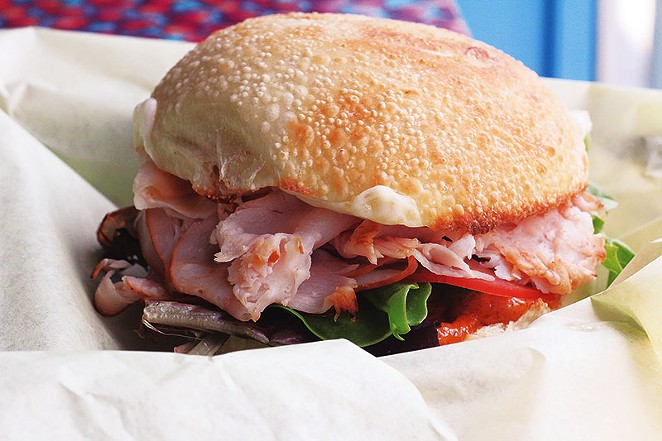 Veronica Luna
You can’t go wrong with any of the sammies at The Station Cafe.

Five-and-a-half years ago, before I was the leading Music/Screens Editor in the free world, I began working at a 300-square foot sandwich shop that served the best sandwiches I had ever had. That was The Filling Station. Now, it has moved next door, added on a taproom and become The Station Café. It still has the best sandwiches in town, due to its signature sauces, ranging from the mild, but pungent super-duper garlic, to the sweet and spicy coconut and Serrano of the Chupacabra, the ever-popular habanero and the hellish Pele's Fire. The bread is made daily and everything from the salads to the desserts are made in-house from scratch. But, I could be partial — I did eat there every day for five-and-a-half years. The Station Café, 108 King William St., (210) 444-2200, thestationsa.com; 11am-9pm Mon-Fri.

The Granary 'Cue & Brew/Facebook
THe Granary's Chef Tim Rattray serves up a pastrami sandwhich every Friday.

While on the subject of legit delis...

We may not have a deluge of Jewish delis in town, but we make do. You can get your fix of pastrami at The Granary 'Cue & Brew (featured on the cover, 602 Avenue A, 210-228-0124) where chef Tim Rattray entices with his scratch-made sandwich on homemade rye, thick-cut pastrami and delicate sauerkraut. Or head to Fratello's Deli (2503 Broadway, 210-444-0277) where you'll find the Napoli with capocolla, ham, provolone, thick banana peppers, romaine, tomatoes, red onions and zippy vinaigrette. Get a traditional cold Italian hero from Florio's Pizza (7701 Broadway, 210-805-8646) with thinly sliced Genoa salami, ham, pepperoni, provolone, lettuce, tomato and vinegar dressing. W.D. Deli's (3123 Broadway, 210-828-2322) sammies get points for variety — the chicken chipotle parmesan has been longtime fave, but don't miss the turkey club. Finally, Broadway Daily Bread's De Zavala location (5011 De Zavala Road) holds our hearts for their BLT with bonus cheddar and avocado. 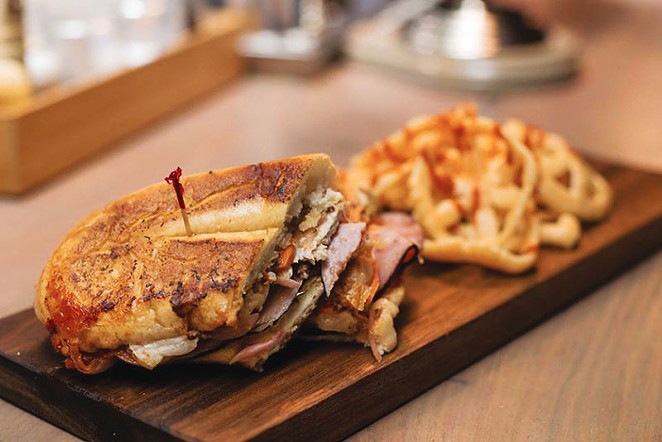 David Rangel
The Last Word's smoky take on the Cubano

Cubanos: The only good thing to come out of Chef

By now, most should know not to get me started on why Chef was such a shit movie. Schlubby asshole Jon Favreau somehow manages to land both Sofia Vergara and Scarlett Johansson and doesn't have a single female staff member in the kitchen? Please. But the food flick scrubbed away most annoyances with serious Cubano sandwich porn, and the availability of said sando has seen a generous uptick since the film's debut. Eat 'em up at Luna Rosa Puerto Rican Grill y Tapas (2603 SE Military Drive, #107, 210-314-3111) with savory lechon; Bakery Lorraine (306 Pearl Pkwy., Suite 110, 210-862-5582) with amazing toasted bread; Esquire Tavern (155 E. Commerce St., 210-222-2521, featured above) with mojo-marinated pork loin, ancho chile pulled pork and house pickles; and The Last Word's (229 E. Houston St., #10, 210-314-1285) Mexican Cuban with ham, escabeche, queso Oaxaca, chile rojo and grain mustard.

Jessica Elizarraras
The Peacemaker po'boy with fried oysters and house-made bacon at The Cookhouse.

I've got a bit of a po'boy problem and The Cookhouse's (720 E. Mistletoe Ave., 210-320-8211) Pieter Sypesteyn is my current dealer. I've been jonesin' for the flaky bread (Sypesteyn ships it in from Gambino's in New Orleans) since the Where Y'at truck launched, but now I can get a steady fix at the eatery off Mistletoe. Nine versions fill the lunch menu currently, with fried shrimp, and the Peacemaker (where fried oysters meet house-made bacon) coming in as some of the top selling items, all dressed with shredded iceberg lettuce, tomato, pickles and mayonnaise. The latest po'boy to make the lunch menu is hard to pinpoint. Created by cook Brandon Wright, the po'boy features thick-sliced, house-brined, smoked and steamed pastrami, provolone instead of the classic Swiss, and a spicy, bright fuchsia red sauerkraut. The whole messy thing is tied together with a "secret sauce." Get more po'boys at Southerleigh Fine Food & Brewery (136 E. Grayson St., Suite 120, 210-455-5701) which changes its creation almost daily; Lüke San Antonio (125 E. Houston St., 210-227-5853) where you can get your hands on a 6-inch Gulf oyster po'boy; or Cured (306 Pearl Pkwy., Suite 101, 210-314-3929) where offerings change daily, but we're partial to the fried green tomatoes with shrimp remoulade and onion sprouts.

Courtesy
The tortas at Ro-Ho Pork & Bread are for those who aren't afraid to get messy.

Our collective torta game in the city, like our love for po'boys, has seen a bump. Take one down for brunch at The Fruteria Botanero by chef Johnny Hernandez (1401 S. Flores St., 210-251-3104). We're partial to the Sincronizada with scrambled eggs, ham, Oaxaca cheese, avocado and crema. Or head to Mezcalería Mixtli, where the menu now permanently includes your choice of braise — carnitas, tinga, mole, cachet (beef cheek) or chicharron con salsa verde ­­— sandwiched between custom-made bolillos from La Michoacana. Or choose your bread at La Panaderia (8305 Broadway, 210-375-6746) — telera, birote or croissant — and filling (get the chicken Milanesa or chorizo and egg). If you're not afraid of a little mess, get thee to Ro-Ho Pork & Bread (623 Urban Loop, 210-800-3487) or El Chivito Tortas Ahogadas (204 Crossroads Blvd., 210-369-9638), and get your hands dirty with the solid carnitas and sopping birote topped with a thin tomato sauce. Use the bag that accompanies most of these tortas, a salsa poncho, if you will. 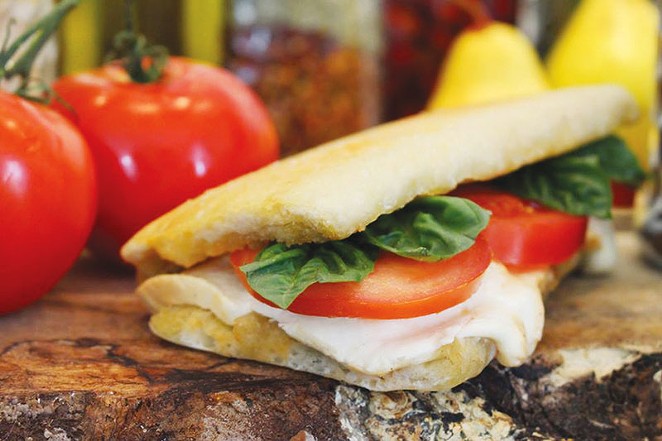 The Classic, our cover model from Green Vegetarian Cuisine (multiple locations) is a solid start with its avocado, cucumbers, sprouts and whatnots. If you're feeling slightly more adventurous, Liberty Bar's portobello sandwich with grilled potato slices, smoked gouda and saffron aioli is an adult option. If you're in a pinch, Central Market's (4821 Broadway, 210-368-8600) roasted veggie Panini has never let us down. Or pair a caprese Panini with gelato from the South Alamode Panini & Gelato Company (1420 S. Alamo, 210-788-8000). 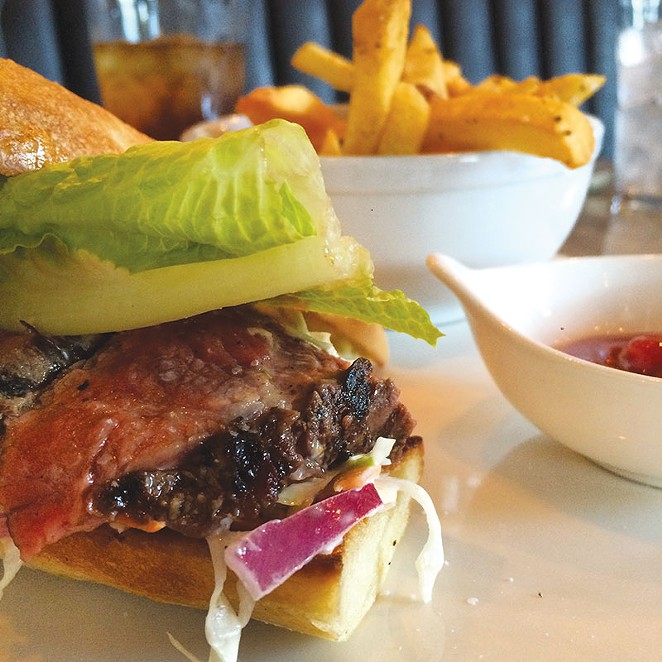