Send a News Tip
Whether it was intentional or not, I wore my Sriracha shirt to my soft opening turn at Tuk Tuk Tap Room (1702 Broadway).

But the mission for tonight was to check out the menu items. The current iteration has eight menu items and two off-menu specials being offered including a phonetically spelled tod kratiem prick Thai, or whole fried striped bass with jasmine rice and green mango salad.

After claiming the Broadway-facing noodle bar as our spot for the night, my dining partner and I decided to dig in. We started with the flavorful pork laarb, or khua haeng, with tamarind, mint, chili and toasted rice powder.

The green papaya salad, or som tam, with tomato, lime, dried shrimp, long bean and peanuts. A new personal favorite, I could have finished the bowl on my own (probably did). 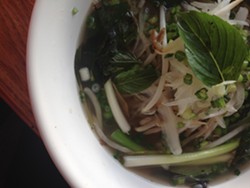 We ended the night with the tapioca- and peanut-topped grilled bananas, a playful dessert that was just sweet enough.

A few things to note:

As the first of several restaurants slated to hit Broadway (SoBro Pizza at 915 Broadway is still in the works), Tuk Tuk is definitely a good sign of things to come. Soft opening dinners are still being held through Saturday so keep an eye on Tuk Tuk's Facebook or Twitter to secure your spot.