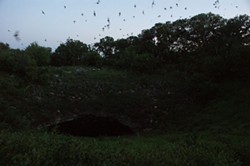 This week could be your last chance to catch a glimpse of the bats that take flight nightly near I-35 and Camden in downtown San Antonio. Due largely to word of mouth and a few segments on WOAI, the bats drew a considerable crowd near the new River Walk expansion this summer. Onlookers frequently lined the Camden Street bridge to watch thousands of them congregate and fly out at dusk each evening. A knowledgeable friend informed me that these are Mexican free-tailed bats, which make their home in Bracken Bat Cave just outside of San Antonio. Apparently, Bracken houses a colony of over 20 million bats, making it the site of the species’ largest colony.

According to the Bat Conservation International website, Batcon.org, Bracken Bat Cave is open for tours on select nights to BCI members who sign up on a first come, first serve basis. Even though I’m not a member (yet), I contacted administrators at Bracken in hopes of attending their last scheduled tour of the year this Saturday, October 9. If I’m allowed to attend, I’ll post a blog here detailing my experience.

Despite SA’s recent drop in temperature — which I’m not complaining about by any means — I hope the bats will be around for at least another week before migrating to a warmer climate. If you’re hanging around downtown at dusk this week, a pit stop at the Camden Street bridge might be in order.