Roo Pub Is An Aussie Delight In Little Monterrey 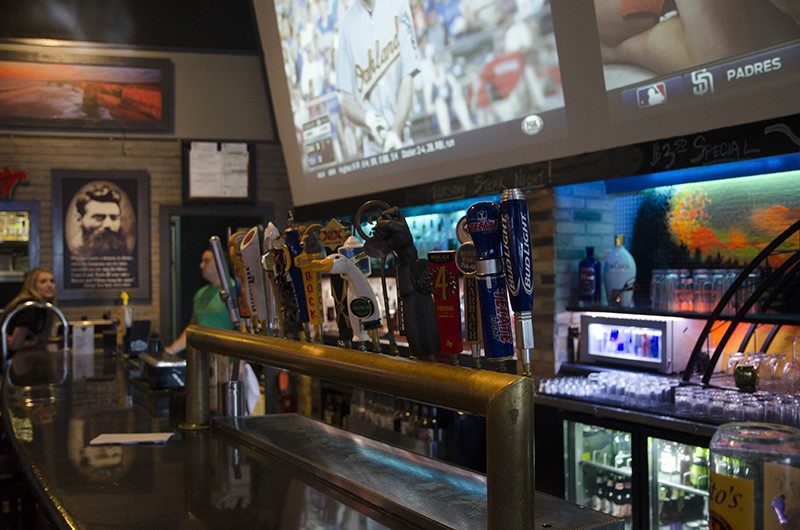 Jaime Monzon
Feel like taking a little trip down under without leaving San Anto? Then make your way to Roo Pub on the North Side.

I enjoy being pleasantly surprised during bar visits and though Roo Pub was way outside my usual purview, the bar's insistence on Australian authenticity proved to be its strongest, most endearing feature.

Located in the same shopping strip as Live Ultra Lounge and the original location of sister bar Angry Elephant, Roo Pub blends into the Sonterrey backdrop all too well.

Whether that's on purpose or not, the bar could benefit from a giant Australian flag outside to prepare folks for the grandeur of Aussie-ness which Roo Pub's owners offer. Let's say they went all out.

Massive in size and almost overwhelmingly cavernous, Roo Pub is outfitted with plenty of seating. Tall tables litter the dining room, while a long bar bench lends itself as a second row of sorts from which to take in one of the 12-plus TV screens. The attention-drawing 40-plus foot projection screen had three different games on, so come football season, the end of baseball or Spurs season, Roo will probably be on your list of places to take in a game.

Once again, I can't stress how down-under the joint becomes once you really take it all in. Autographed rugby jerseys hang along the walls and a Patty Mills section, likely reserved for the Spurs guard for when he's feeling homesick, is filled with portraits and photographs. For those wondering, Mills himself is a fan, lending owner Chip Ingram advice on how to outfit the space before its conception. And whether it dips into kitsch or not, the Australian went as far as to pose with a toddler-sized kangaroo during a "Straya Day" Mills hosted in 2014. And yes, there's a "Patty Millt" on the burger menu.

Speaking of which, the menu is almost as tall as the 6-foot Aussie himself and it's filled with just about everything under the sun. A welcomed respite from faux-pubs that forget to pack in the food, Roo Pub's menu includes apps, greens, counter meals, burgers and sweets, ranging from $6.95 for dessert to about $12.95 for one of their tricked-out hamburgers.

After a few weeks' worth of burger trials, I was hesitant to order yet another meaty number, but as they take up a full third of the menu, it seemed wrong to go another way. My bar-partner and I also tried the alligator bites, deep-fried nuggets served with fresh lemon slices and a creamy remoulade. We washed them down with Fireman's 4 ($5) and a Freetail TexiCali ($5.50).

Those looking for happy hour specials will find $2.50 bottled domestics, $3 draft domestics and $3.50 liquor specials (currently a spiced Malibu rum is in the spotlight) can find them from 11 a.m. to 7 p.m. Themed nights are an obvious choice in a uber-themed bar, so Roo Pub has a Taco Tuesday with Mexican beer specials and $2 tacos and a Thursday Steak Night where the house chefs mix things up regularly — the most recent offering includes a grilled rib eye with sweet and savory shrimp skewer, grilled pineapple, onions and jalapeños, a ginger-lime butter and a side of fancy mac 'n' cheese for $20. Insert joke here about forgoing throwing something on the barbie, mate.

While the rest of the drink list is just as massive as the food menu, our bartender strongly suggested we stay within the confines of the margaritas and mule variations. I can appreciate when someone helps me avoid the pitfalls of a sugar-bomb drink. I went with the Cowboyrita, a replica of the 'ritas served inside Cowboy's AT&T Stadium with Hornitos reposado, DeKuyper triple sec, sour mix and lime juice. It was cold and strong, but definitely worth $8.

We spent most of our time at Roo Pub taking in fellow bar-goers and Aussie décor before realizing there was a whole other bar in the next room over. A veritable game room, the addition held four cornhole game stations, a ping pong table, two pool tables, a fine electronic dart board nook and a handful of sport video games.

Though it might be dissonant to find such a "Strayan" refuge in Stone Oak, the bar gets so much right it begs for Ingram to try his hand at more country-themed joints. Imagine a Belgium-French joint for Tony Parker and Boris Diaw. Or a Brazilian bar/churrascaria for Tiago Splitter. Or an Argentinean version for Manu.