It was easy to spot the San Antonio contingent at the Jesse Perez’s formal dinner in the dining rooms of New York’s James Beard House — no, they were not the ones wearing big hats and even bigger buckles.  They were, instead, the ones sneaking looks under the table at iPhones and other devices for news of the Spurs final. We know how that game turned out. (Sorry guys.)  San Antonio’s food guys, on the other hand, won their road games and then some.

Perez, creative force behind Arcade Midtown Kitchen at Pearl, was one of two local chefs doing star turns in the Big Apple that weekend; the other was Jason Dady of Tre, Bin 555, and Two Bros. local fame. And the venues — not to mention culinary approaches -- couldn’t have been more different. The Beard House is the former West Village residence, now a culinary center, of the revered food writer-cookbook author. It hosts a limited number of out-of-town chefs each year and asks them to cook their hearts out in a kitchen that, by Texas standards, is tiny; you have to walk through it to get to the house’s backyard reception spaces.  While guests stood around sipping a spunky Champagne cocktail, staff circulated with the likes of wild boar confit, anise-scented corn tamales, and Texas quail medallions—just like in your own backyard on the day before the official start of summer.  Maybe minus the bison-kurobuta pork albóndigas.

Upstairs in the center’s elegant but equally space-challenged dining rooms, Perez continued his take-no-prisoners assault on the Apple with an Arcade favorite, the lobster tacos with poblano crema, then continued with a lush black bean bisque with banana bread French toast, a spectacularly successful pepita-crusted foie gras torchon salad, a not-quite-as-exquisite turbot and scallop dish, followed by a triumphant chile-crusted Akaushi beef creation served with a pasilla and fig mole. As I was sitting next to Josh Ozersky, food columnist for Esquire, I can testify that New York was impressed.

Wines for Perez’s dinner had been selected and supplied by Ray Ayala of Republic National Distributing, who was in attendance with representatives of Culinaria, the SA Convention and Visitors Bureau, and our own C.I.A. --along with Perez’s wife and father, recently retired from 50 years with H-E-B. The wine for dessert was one of the few that actually works with chocolate in your (foreign) correspondent’s opinion, a naturally sweet Banyuls by Chapoutier — and it was a good thing, too:  it was pitted against a chocolate-cascabel ganache which was in turn accompanied by an ancho-raspberry gelato and toasted pepita brittle. Eat your heart out, Daniel Boulud — to whose DBGB some Alamo Citians retired for fun and sausages, including, perhaps, the $22 Double Dog Dare afterwards. 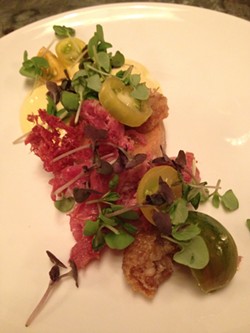 Given the funky venue for Dady’s event the next night, a sometime shop/studio in SOHO that is frequently (but only partially) cleared out to serve as a dining space called City Grit, his approach was understandably much more casual, more obviously inventive. With high risk comes high gain and, occasionally, a mild disappointment; Dady’s opener, a delicate macaron sandwiching foie gras mousse and luxardo cherry jam, didn’t quite make it on textural grounds, but gets high marks for bravado. A deconstructed banh mi sandwich, on the other hand was a better-than-the-original invention. Another deconstruction, this of a “gordita” with duck and crackling duck carnitas with heirloom cherry tomatoes, was nearly as

As a side note, among many other diverse dining and drinking experiences (the meatball sandwich at Parm is now the red-sauce Italian standard), I also happened upon some exquisite (no other word for it, except perhaps ethereal) macarons at the newly opened maison Ladurée on Madison Ave.  This New York outpost of a famous French fabricant de douceurs, has folks in line (or on line as New Yorkers say) for the delicate confections in saveurs such as the expected pistachio as well as caramel with salted butter, rose, and yuzu-ginger, a personal favorite. Though, again, San Antonio doesn’t suffer too much in comparison: if you haven’t already, seek out the macarons at our own Bakery Lorraine. And imagine what, if anything, you might stuff them with. Apart from stuffing yourself with them.