New San Antonio bar Horizon & More only admits those 30 and older, and Bentley's Bar recently upped its age limit to 25. 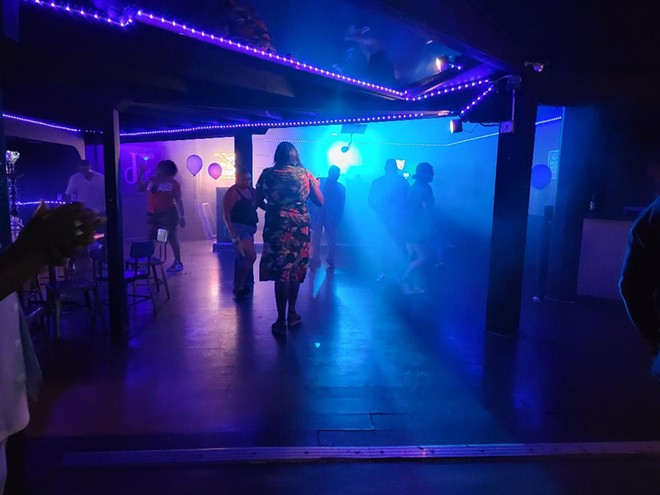 Travis E. Poling
With at least two San Antonio bars adopting higher admission ages in recent weeks, it could be easy to read the beginnings of a trend.

On a recent Friday night, nightspot Horizons & More thrummed with youthful energy. The DJ spun music at a volume that defied conversation, and patrons strutted their dance moves with plenty of exuberance.

At the Northeast San Antonio club, feeling youthful is just fine, assuming patrons are at least nine years removed from the rite of passage that is turning the drinking age of 21.

Former city employee Toya Taylor opened Horizons & More in March as a 30-and-up nightclub, and it became immediately popular. Its calendar filled up with events and themed nights, and the partiers keep rolling in.

While the owners of Bentley's didn't respond to a request for an interview about their decision to raise the age limit, Horizons & More's Taylor said her call to block younger customers was based on experience.

"If a bar is raising their age limits, they are having problems," she said.

In her time with the city, Taylor witnessed those kinds of problems — among them police calls for fights and other disturbances — and decided to nip them in the bud. As her club's slogan goes, "The grown and mature come to play."

On that recent Friday, dozens of bikers from motorcycle clubs rubbed shoulders with older couples. Women dressed to the nines for a night on the town and a host of others bonded over a common goal: enjoying themselves without drama.

Dee Montez, owner of food truck Dee's Lao-Thai Food, has had a front-row seat to comings and goings at the 30-and-up club from just outside the front door. Customers stop by her mobile kitchen when they get hungry after an evening of revelry.

"This is a more mature crowd," Montez said. "They come here to party, not to cause trouble. They know what their limit is."

At closing time, Taylor talks to each person as they spill out the door. Most are regulars, and when they're newcomers, she introduces herself and encourages them to come back. There are farewells instead of fights, handshakes and hugs instead of hassles.

"Everyone respects me, and to me, it's just like a family," Taylor said.

With at least two San Antonio bars adopting higher admission ages in recent weeks, it could be easy to read the beginnings of a trend. But don't be too quick to rush out and get a fake ID to prove you're over 30.

Few, if any, other SA bars have followed suit, and the number of places around the country with similar policies appears to be isolated.

In 2016, a spate of articles in newspapers and even Food & Wine Magazine speculated that bars with higher drinking ages were shaping up to be a trend.

Washington, D.C.'s Dew Drop Inn, for example, made headlines with a sign saying they welcomed the 24-and-up crowd. However, the bar later clarified that it wasn't a prohibition on 21-year-olds, just a way to discourage underage university students from flashing fake IDs.

Reports also percolated about Long Island, New York bar Kasey's Kitchen & Cocktails, which required men to be 30 and up to get a stiff drink, while women could be no younger than 25. Just up the road at Phil's Crummy Corner in Brooklyn, the admission age on weekend nights for the Puerto Rican restaurant and sports bar went to 25 after neighborhood noise complaints.

But those isolated anecdotes didn't lead to a groundswell of nightspots imposing new age limits.

San Antonio pubs and clubs, which have rebounded mightily since Texas Governor Greg Abbott allowed bars to reopen, aren't flocking to the idea. Most appear happy to make up for lost time after the worst of the COVID-19 pandemic appears to be behind us.

Indeed, alcohol sales in Bexar County bars and restaurants increased 37% to $75.63 million in April compared to the same month last year, according to a report for the Texas Bar & Nightclub Alliance by AlcoholSales.com.

Bar industry vets also point out that many establishments who want to court an older crowd already do that without imposing new age limits. They can appeal to mature patrons with the music they play, their event selections, prices, dress codes and security policies.

Regular Bryant Walker said he's been going to the club since it opened and enjoys both the energy and having the ability to kick back on the patio with a cigar. He said he's not eager for twentysomething revelers to cramp his style.

"They are young and when you add liquor to it, and they ain't lived none?" Bryant shook his head. "In my opinion [with 30 and over], it's just safer. I'm just more comfortable."