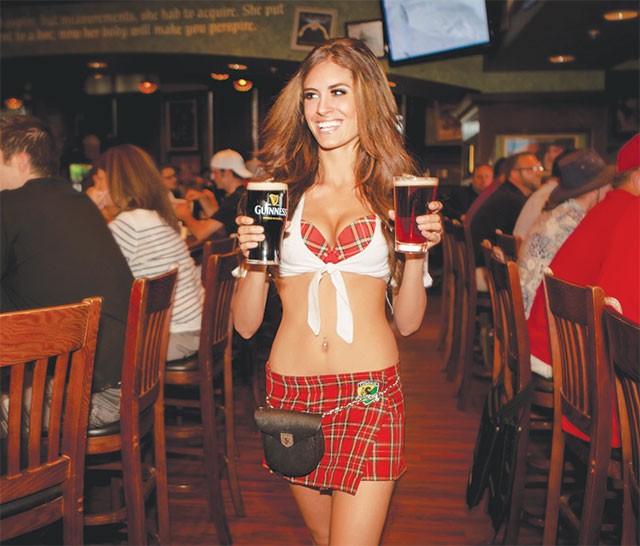 It’s Marketing 101: Sex sells. What was once accepted (and is now expected) from the automobile and fashion industries has slinked into the dining scene by way of the drinking scene. America has birthed modern democracy, the atomic bomb and now, as trademarked by Bikinis Sports Bar & Grill founder Doug Guller, the Breastaurant! Yep, the mere promise of “knockout views” and decent burgers served up by scantily clad females has exploded this niche market all over our faces. And, apparently, we like it.

Maybe this unholy matrimony was a power couple waiting to happen: America loves its food (having only recently lost the title of the most obese country to Mexico), and America loves its sex (according to Alexa, a web analytic company, the U.S. is the No. 1 one purveyor of pornography in the world.) America also loves its booze, ballgames and homogenized chains, and voila, walk into any Tilted Kilt or Twin Peaks and inhale the sweet smell of … success. Seriously, as other nationally franchised restaurants took it on the chin during the recession, cleavage-flashing cantinas heaved their way into notoriety.

While profits rolled in, these hyper-sexualized establishments have come under fire for, shocker, perpetuating the objectification of women. Still, plenty of women happily apply for these gigs, arguing that it brings in good and easy money in a safe environment.

Beyond the underlying unease, though, are all these places just a smack to the senses? Or could I find “the one” that had all the qualities you look for in a solid night out, no matter your server’s cup size?

Class: ★
My date with Bikinis Sports Bar & Grill was fraught with the highest of highs and the lowest of lows.
Clientele: ★★
Older men in big, long, baggy coats and scruffy beards staring awkwardly
Drinks: ★★★
Thirty plus beers, a variety of adult teas (think Long Island and Kentucky), a good mix of shots and plentiful happy hour specials
Food: ★★★
Solid (if not great) food
“Ambience”: ★★
The Radiohead song “Creep” that was playing as I walked in might as well have been the anthem of this place.
Talent: ★★★★
Cowboy boots plus short shorts plus the titular bikini top equals ‘Merica!
Security: ★★
The chance of brofight was low, but the probability of a creep out was all but assured.
The One?: ★★
Sorry Bikinis, I’m looking for a little more finesse.

Class: ★
Ol’ crazy eyes is a classic Latina firecracker. It’s her friends that might be the problem, long-term.
Clientele: ★★★
While most were decent, blue-collar dudes, the ones that came over to watch the UFC fight were a little edgy.
Drinks: ★★★
From shots of Jameson, Jager and Jack Honey to margaritas, Modelo and Tecate, Ojos Locos had the basics covered.
Food: ★★★★
She recommended the Gringo Burger, which I’m pretty sure is the most authentic Mexican burger you can get.
“Ambience”: ★★★
A crowded bar and these amazing 100-ounce beer towers they serve there can quickly raise the rowdy factor.
Talent: ★★
You know the type: Star tattoos, deadbeat boyfriends and poor decision-making all around.
Security: ★★★
It all screamed knife fight. The bouncer arrived around 7, and, as if on queue, a man in a cowboy hat quickly gave him something to bounce.
The One?: ★★
There is potential here, but I can anticipate too much drama from this chica.

Class: ★★★★
Tilted Kilt gave off a more positive and professional vibe, and she seemed to love her job.
Clientele: ★★★★
An older crowd to be sure, but much more together and well-behaved
Drinks: ★★★★
The 15 or so beers on tap, cocktails, kilt bombers, aged whiskey and premium spirits provided something for every taste and mood.
Food: ★★★
Solid
“Ambience”: ★★★
She seemed to have a good mix of male and female friends and they all got her attention equally. She was even quite the sports fiend, with multiple TVs and projector screens.
Talent: ★★★
Even with less cleavage than I was used to during this assignment (and longer kilts than I had hoped for), she could still keep my attention and carry on a conversation.
Security: ★★★★
The only fight I could imagine breaking out was to pay the check as these doctors, lawyers and business owners attempted to flash their money.
The One?: ★★★★
Tilted Kilt, you had me at “Uh, excuse me sir, my breasts are down HERE!”