Shudder
One of the best horror anthologies released in years, "The Mortuary Collection," is now available exclusively to Shudder subscribers.
As we continue our zombie shuffle toward Halloween, the greatest night of the year, the veil between worlds begins to part, the number of avoid-at-all-cost titles diminishes and more fantastic and terrifying visions are bequeathed.

One of horror’s most entertaining genres, the anthology, has seen a massive uptick in both quality and quantity in the 13 years since the gold standard, “Trick ‘r Treat,” debuted.

“The Mortuary Collection” stands shoulder-to-shoulder with the all-time greats. Writer-director Ryan Spindell’s gory bouquet truly has something for everyone, and Spindell thankfully sticks the landing by delivering a wrap-around story that’s just as good as the short segments contained therein.

Set in the town of Raven’s End, where newspaper headlines warn that the Boggy Bay Tooth Fairy remains on the loose, mortician Montgomery Dodd (Clancy Brown) regales a young job applicant, Sam (Caitlin Custer), with a flurry of dark wonders.

“As with all stories, it’s not the length of the tale, but the quality of content,” Dodd says, and boy howdy, he ain’t lying.

From a pretty pickpocket who discovers a portal to the Elder Gods, to a college freshman (Ema Horvath) looking to spread her seed, to the phantasmagorical mindfuck that awaits a caregiver who fails to ease his wife’s suffering, “The Mortuary Collection” is a ghoulish delight that commands your attention.

Arrow Video
Ivy (Toby Poser) communes with the spirits in the haunting and heartbreaking ghost story, "The Deeper You Dig."

The Deeper You Dig
4 stars, 95 minutes, Blu-Ray and streaming

From the twisted minds of The Adams Family (writer-director John Adams, his wife, co-writer-director Toby Poser, and their daughter, actor Zelda Adams), “The Deeper You Dig” is a stark and surprising ghost story that creeps and claws its way under your skin and burrows deep into your subconscious.

Ivy (Poser) is a local spiritualist who makes her living reading tarot cards and channeling the departed spirits of loved ones missed by her elderly clientele. Ivy’s daughter, Echo (Zelda Adams), is a wise-beyond-her-years goth-girl teenager. And Kurt (John Adams) is new in town, a drifter who plans to renovate and flip a long-dilapidated property next door to Ivy’s home.

These three lives will intersect in ways both familiar and unexpected, but that’s not what makes “The Deeper You Dig” such a discovery.

Adams and Poser approach each scene with imagination and ambition, using light and shadow to phenomenal effect. Their take on the overused ‘purgatory’ trope is revelatory. And the bond between Poser and Zelda Adams, as real-life mother and daughter, radiates off the screen, infusing “The Deeper You Dig” with an urgency and aching sorrow that resonates and hits home. 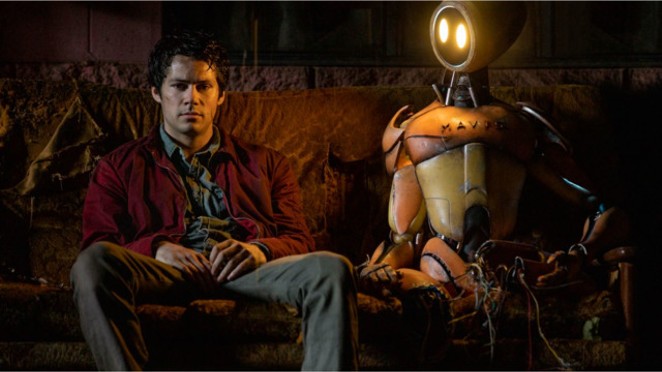 Paramount Pictures
Joel (Dylan O'Brien) is dealing with the end of the world, the death of his parents and the loss of his love. But at least he has a companion robot to keep him company.

Nine years after breaking out in MTV’s “Teen Wolf,” and thankfully two years past the conclusion of his “Maze Runner” trilogy, Dylan O’Brien has been gifted with a new potential franchise, and it’s so much better than anyone likely expected.

“Love and Monsters” imagines a world decimated by twin disasters. First, an extinction-level asteroid is blown up prior to impact. But the fallout from the bombs, which spreads across the globe, causes everyday creatures like cockroaches, ants, earthworms and centipedes to grow exponentially into massive monsters that lay waste to cities and kill most of humanity.

Joel (O’Brien) was just 17 when the world as he knew it ended, thick in the throes of first love with Aimee (Jessica Henwick), and excited for college. Now, seven years later, he lives in an underground bunker that’s constantly being attacked by giant critters. By chance, he reconnects via short-wave radio with Aimee, who is surviving 85 miles away on the northern California coast with another group.

“Love and Monsters” is both a coming-of-age story and a robust survival thriller. The special effects, a healthy mix of practical and CGI, are solid. The cast, including Michael Rooker as a wise mentor, commits wholeheartedly. And just when it ends, you can’t wait to see more. 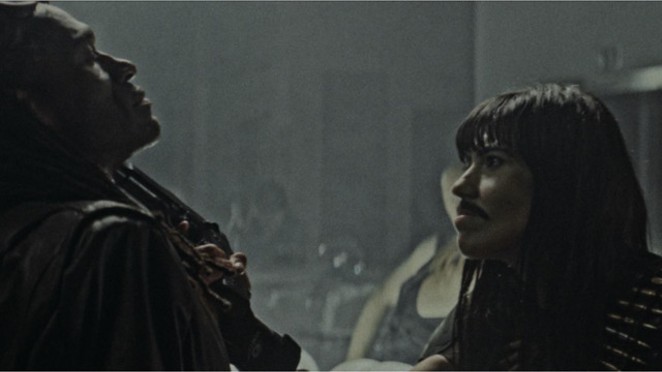 The Horror Collective
Don't ask why Raksha (Doroteya Toleva, right) has a mustache. Seriously, don't ask. You might lose a limb.

“Bullets of Justice,” the latest balls-out assault on cinema from writer-director Valeri Milev, is batshit crazy in the best possible way.

Maybe it’s the genetically mutated German pig soldiers who fly around on jet packs with little people strapped to their backs as tail gunners. Or the faux advertisements hawking "Grade A human meat" for sale to feed the pig army. Or the hero, Rob Justice (co-writer Timur Turisbekov), a former runway model turned wasteland assassin, who can’t help but have sex with everyone, including his mustached sister Raksha (Doroteya Toleva), also a vicious assassin. Or the perpetually naked and aroused uber villain/former catwalk king Rafael, the only man with a better ass than his, as Justice proclaims during a voiceover.

It could be that this Bulgarian import from Kazakhstan eschews all norms of conventional genre cinema. Or maybe it’s just the intoxicating way that Turisbekov and the other actors speak their dialogue as if it’s the first time they’ve ever uttered words.

If you loved “Iron Sky,” prepare to go gaga for “Bullets of Justice,” an instant cult classic.

Well Go USA Entertainment
I have no idea what's happening in this image from "Broil," but that's fitting given I had no idea what was happening while I watched "Broil."

Jonathan Lipnicki, the adorable kid who knew the weight of a human head, is all grown up, and apparently no longer making smart career choices when it comes to the movies he stars in.

Lipnicki plays The Chef in “Broil,” a new horror movie about a deranged, cannibalistic family — I don’t know if they’re demons or celestial beings or a third-rate version of the Kardashians — that gets together once a year to celebrate The Harvest. Only this year, two of the family members want out of the big tradition, and they offer up their first-born teenaged daughter as penance. Things do not go as planned. A toddler gets grilled and eaten. Lots of other people die. It’s all very confusing.

Honestly, I don’t have a fucking clue what “Broil” is about. I just know it’s not very good.

Gravitas Ventures
This man was just brutally beaten while people looked on and did nothing, but that isn't important. What he's trying to tell you is don't watch "Don't Look Back."

Not only did Reddick look way back 20 years to his first film for inspiration, but he also forgot everything that worked so well to make “Final Destination” an iconic horror franchise.

It’s not just that “Don’t Look Back” sucks. It’s the depth of suckage that truly offends and confounds.

“Don’t Look Back” is about a group of supposed strangers who all happen to be in a public park on the day that a beloved local philanthropist is brutally murdered while the group all watches and does nothing to intervene. Some even stream the beating in real-time on social media.

Quicker than you can say ‘no one cheats death,’ the group suddenly finds themselves being picked off, one by one, the seeming victims of karmic retribution for their inability or unwillingness to be a good Samaritan.

Only, instead of the inspired and over-the-top grand guignol deaths from the “Final Destination” series, viewers are treated to a series of underwhelming, wholly pedestrian fatalities that would barely make the opening segment on the local news.

Avoid at all costs.

"Nocturne" and "Evil Eye" The last two “Welcome to the Blumhouse” thrillers are on Amazon Prime.

"Painter" This psycho-sexual thriller about artistic talent and control is streaming.

"Carmilla" This gothic vampire throwback to the days of Hammer Horror is on DVD and streaming.

John W. Allman has spent more than 25 years as a professional journalist and writer, but he’s loved movies his entire life. Good movies, awful movies, movies that are so gloriously bad you can’t help but champion them. Since 2009, he has cultivated a review column and now a website dedicated to the genre films that often get overlooked and interviews with cult cinema favorites like George A. Romero, Bruce Campbell and Dee Wallace. Contact him at Blood Violence and Babes.com, on Facebook @BloodViolenceBabes or on Twitter @BVB_reviews.