Here are a few short reviews of movies released on Friday, May 24 at San Antonio theaters and on Netflix and a couple we missed the week before.

Walt Disney Studios
At best, Disney live-action remakes of past animated movies have been inconsistent over the last decade. For every beautiful reimagining – like director Kenneth Branagh’s 2015 fairy tale Cinderella – comes something like this year’s Tim Burton-helmed Dumbo to remind fans of the original animations that some classics are best left untouched. While nostalgia will more than likely factor into many viewers’ thoughts on how well Disney did in retelling 1992’s Aladdin, it’s important to at least try to keep the two projects separate and allow the new Aladdin to speak for itself. The problem is, however, that director Guy Ritchie’s Aladdin doesn’t have much to say nor does it offer a definitive reason a remake like this should even exist. Oscar-nominated actor Will Smith (Ali) beatboxing as the Genie is a total misfire, as are most of the dance numbers and new songs. With the exception of the magnificent “A Whole New World” sequence where title character Aladdin (Mena Massoud) and Princess Jasmine (a lovely performance by Naomi Scott) ride a magic carpet across the fictional city of Agrabah, Disney's Aladdin is a CGI-heavy bore. Aladdin opened nationwide May 24.
2 stars out of 5 stars 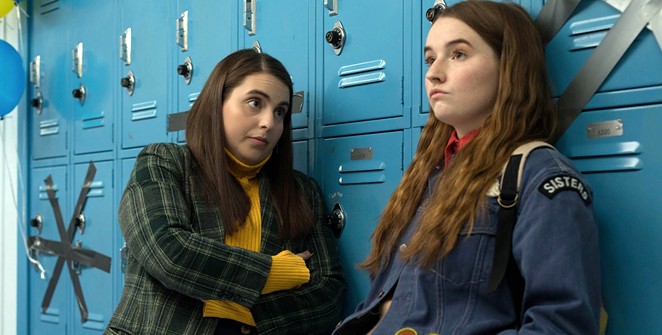 Annapurna Pictures
Superbad comparisons aside, Booksmart ultimately works because of the authentic friendship between its main characters Amy (Kaitlyn Dever) and Molly (Beanie Feldstein), two BFFs who decide to squeeze four years of partying they didn't do in high school into one memorable night before graduation. In her directorial debut, actress Olivia Wilde isn't shy about borrowing from past coming-of-age high school comedies, and neither are the film's four screenwriters who start their overrated script on a misleading premise that all average high school students will still get into top-tier colleges or have six-figure job offers waiting for them at companies like Google after graduation. Without that weak plot point, Booksmart wouldn't have anywhere to go. The film basically would've been a 102-minute sleepover sequence where audiences witness Amy and Molly spend their evening freestyle dancing in their bedroom together and watching documentaries like RBG. Luckily, Dever and Feldstein manage to carry the film on their own and do so with a chemistry that is both offbeat and sweet. Booksmart makes the grade, but needs a curve. Booksmart opened nationwide May 24.
3 stars out of 5 stars

Netflix
Allison Williams (Get Out) stars as Charlotte Willmore, a former music prodigy who had to give up her dream at a young age to become a concert cellist and leave her prestigious school in Shanghai to tend to her sick mother. Years later, Charlotte reaches out to her old music teacher Anton (Steven Weber) to reconnect, a reunion where Charlotte is introduced to Anton's most successful student Lizzie (Logan Browning). The first half of The Perfection would've worked a lot better as a twisted episode of a horror anthology. Instead, the gimmicky and gory thriller wears out its welcome once the film's three co-writers makes some ridiculous narrative choices that transform The Perfection from a strange, sick and campy revenge flick into something more lowbrow and less entertaining. The Perfection debuted on Netflix May 24.
2.5 stars out of 5 stars 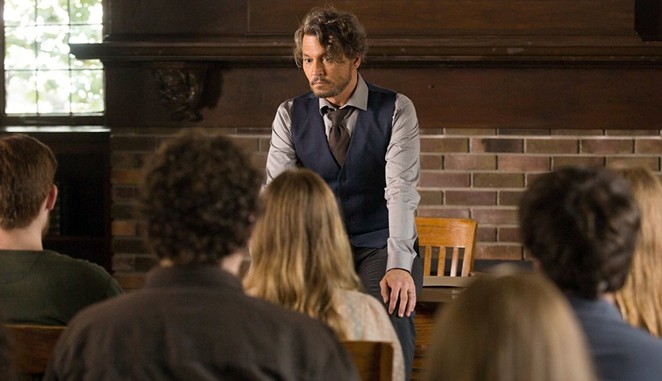 Saban Films
College literature professor Richard Brown (Johnny Depp) goes through a sort of midlife crisis after he is diagnosed with terminal lung cancer and told he only has six months to live. If that wasn’t enough, his wife Veronica (Rosemarie DeWitt) tells him she's having an affair with his boss Henry (Ron Livingston), but not before brushing off their daughter Olivia's (Odessa Young) news that she is gay. Richard decides to keep his imminent death a secret and puts his energy into his final literature class by experimenting with his teaching style. We're not sure if writer/director Wayne Roberts (Katie Says Goodbye) was going for Dead Poets Society or Stand and Deliver by having Richard become a "cool professor" with his students, but none of the relationships he makes register as more than surface level drivel. It's especially true with the unhealthy marriage he and Veronica share and that Roberts can't seem to decide how to maneuver through. By the third act, Roberts wants audiences to feel there is some kind of connection between the two of them, but offers no believable reason to think they shouldn't have split years ago. The Professor is a stagnant character study. The Professor recently hit VOD platforms.
2 stars out of 5 stars

Greenwich Entertainment
Writer/director Madeleine Olnek (The Foxy Merkins) delivers a unique look at writer Emily Dickinson’s life through extremely dry, absurdist humor (think Comedy Central's Drunk History by way of filmmaker Armando Iannucci) in Wild Nights with Emily. Comedian Molly Shannon stars as the wonderfully witty and misunderstood American poet, who left behind 1,800 unpublished poems at the time of her death in 1886. Olnek explores Dickinson’s inspiration for her work – in particular, her little-known relationship with Susan Gilbert (Susan Ziegler), who ends up marrying Emily’s brother. Wild Nights is delightfully funny with Shannon in the lead role and with Olnek rationalizing Dickinson’s sometimes odd behavior with interesting theories about her personality and approach to her craft. Wild Nights with Emily is currently playing exclusively at the Santikos Bijou Cinema Bistro.
3.5 stars out of 5 stars