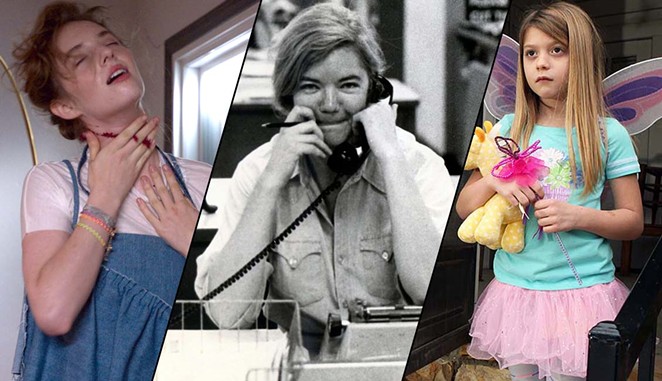 Here are a few short reviews of movies released at San Antonio theaters and on VOD this week.

With a title like Itsy Bitsy, horror fans might anticipate a campy creature feature starring a cluster of eight-legged freaks, but visual effects producer and first-time writer/director Micah Gallo has something a little more sinister up his sleeve. The story follows Kara Spencer (Elizabeth Roberts), a nurse and single mother who moves with her two children to a small town to take a job as a private caretaker to Walter Clark (Bruce Davidson), a world-traveler with an affinity for collecting tribal artifacts. When a cursed relic is brought to him by a friend of his deceased wife, it releases a dog-sized, venomous spider that takes up residence on Walter’s property. Surprisingly, the spider itself doesn’t play into the narrative much until the third act. Itsy Bitsy is more about Kara and her insecurities as a mother and the depression she has to confront because of the death of a third child. Despite Gallo’s ability to keep a consistently creepy vibe, the script, which is also co-written by special effects and makeup artist Jason Alvino (Sucker Punch) and writer Bryan Dick (911 Nightmare), doesn’t bring all the dramatic and horror elements together in a cohesive enough way. Gallo, however, builds some solid tension. Ironically, Itsy Bitsy might’ve worked better as a conventional and minimalist ghost story instead of a gooey monster movie. The arachnid is irrelevant. Itsy Bitsy hits VOD platforms August 30. 2.5 out of 5 stars (not recommended)

One could argue that Ladyworld, an avant-garde thriller being labeled by some as the female version of the 1954 novel Lord of the Flies, is performance art, but don’t buy it. Co-writer/director Amanda Kramer and co-writer Benjamin Shearn pile a group of actresses into a house, turn on a camera and tell them to brood for 93 minutes. That is the emotional depth viewers can look forward to experiencing. Ladyworld is ambitious, but it’s the kind of ambition one might recognize in a second-year film major. The potential is there, but not the execution. The film follows eight teenage girls at a birthday party who become trapped inside the host’s house after an earthquake. With each passing hour, the teens slowly begin to descend into madness as they attempt to find a way out. They also form alliances between each other – like an experimental version of a TV reality show where the contestants live together and try to get under each other’s skin. Some of the girls swear there is a male stranger lurking inside the house, although the presence of the intruder is left up to audience interpretation. Between all the crying and cattiness and having to listen to one of the most grating musical scores in recent memory (electronic dissonance can be amazing – i.e. composer Mica Levi – but this is something else), Kramer and Shearn fail to create even one character who feels like an authentic human being. Instead, characters act odd without much direction and Kramer seems more interested in staging a scene with her cast rather than making one come alive. “This party would be a lot more fun if it were over,” a gloomy girl says at one point in the film. We couldn’t agree with you more. Ladyworld hit VOD platforms August 27. 1.5 out of 5 stars (not recommended)

Raise Hell: The Life & Times of Molly Ivins, featuring late pithy political columnist and Texas-raised rabble-rouser Molly Ivins, is the kind of documentary viewers will wish wasn’t made posthumously. Watching archive footage of the liberal-leaning writer breaking glass ceilings in the journalism world is wildly entertaining and inspiring, but imagine the impact a film like this would have with Ivins speaking not only on her entire career but on the current toxic political climate and the morally bankrupt occupant of the White House. Sadly, Ivins passed away in 2007 after a seven-year battle with breast cancer. What she left behind was a trove of respected work printed by numerous outlets across the country, direct words of wisdom and humor captured on video and a roadmap that can influence future journalists to always seek the truth and fight back against the establishment. “She got great joy in exposing the bastards,” one admirer says in the film. Although director Janice Engel treats Ivins with kid gloves at times, it’s Ivins who is throwing the biggest punches. Raise Hell is a high-spirited tribute to a consummate professional who could deliver a Texas-sized rattlesnake bite you’d never forget. Raise Hell: The Life and Times of Molly Ivins opens exclusively at Alamo Drafthouse Park North August 30. 3.5 out of 5 stars (recommended)