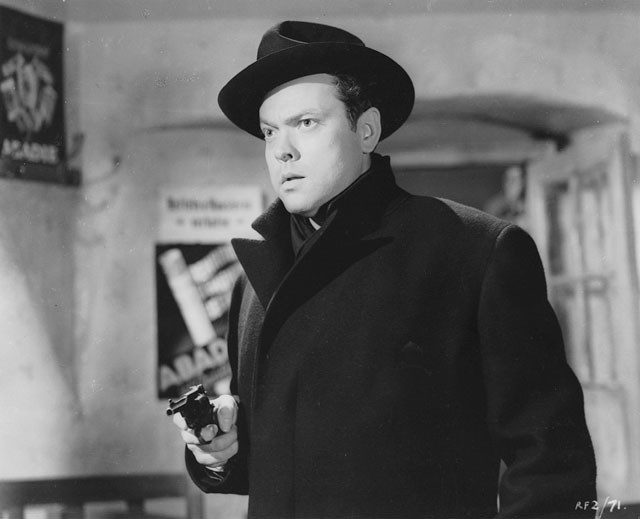 Who is the third man and how did he contribute to the untimely death of Harry Lime? This is the perplexing question that Holly Martins (Joseph Cotten) is determined to answer in the film noir The Third Man, his quest leading him deep into the black market underworld of post-World War II Austria. Martins arrives in Vienna at the request of Lime (Orson Welles), flat broke and in need of a job, only to discover that Lime has died the day before in a car accident. An inquiry into his friend’s death yields the discovery that his childhood pal was deeply involved in the black market, an accusation that Martins not only denies but also intends to disprove. With this goal in mind, he begins to interrogate Lime’s associates, assisted by Lime’s former lover Anna (Alida Valli), eventually learning there was a third unidentified man present at Lime’s death. However, witnesses either deny this man’s existence or die unexpectedly before they can divulge the truth. As Martins descends deeper into the web of intrigue and lies, he doggedly pursues the ultimate question of who killed Lime and why.

Filmed on location in Austria a mere three years after the end of World War II, the cinematography is achingly beautiful, the black-and-white palette capturing the devastation of a city bombed into oblivion against Vienna’s remaining luxurious buildings. The style reflects the plight of the Austrian people, disillusioned by a brutal war, attempting to live decadently in an atmosphere of corruption. Robert Krasker won an Oscar in 1951 for his cinematography, employing odd angles, glistening wet streets, and shafts of brilliant light to portray a city at odds with itself. The city is literally divided as well, with portions of the metropolis belonging to Russia, France, Great Britain, and the United States. Russia’s behavior in particular foreshadows the approaching Cold War. Adding to the unease is the musical score, which hinges on the zither, jangling away in a happy off-kilter fashion, blissfully unaware of the sorrow it accompanies.

The acting in The Third Man is a revelation. Cotten portrays the naïveté and bemusement of an American unaccustomed to deception and death; Welles gives a beautifully understated performance, portraying both fiend and friend; and Valli provides the human aspect of Lime’s life and love. The only frustrations involve the lack of subtitles during rather lengthy German monologues and the occasionally jarring tune of the zither, which is difficult to get accustomed to initially. However, The Third Man won the Grand Prix at the 1949 Cannes Film Festival, and the British Film Institute chose it as the best British film of the 20th century, and rightfully so. It is a testament and a warning about what mankind can aspire to and the depths to which it can sink.