The film falsely claims that paid Democrat operatives known as 'mules' illegally deposited thousands of ballots with votes for Joe Biden into drop boxes across the country during the 2020 presidential election. 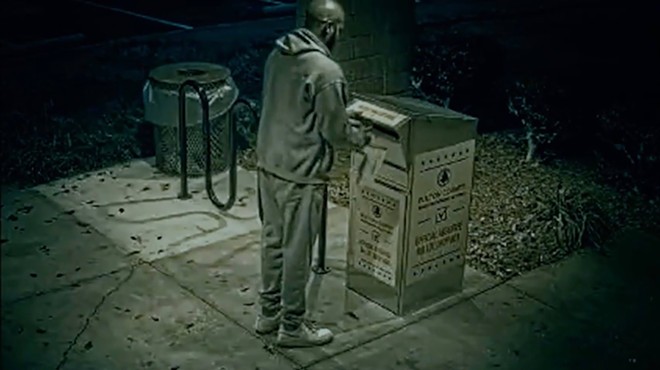 The film falsely claims that paid Democrat operatives known as "mules" illegally deposited thousands of ballots with votes for Joe Biden into drop boxes across the country during the 2020 presidential election. Together with controversial Texas-based nonprofit True the Vote, D'Souza alleges the widespread fraud occurred in Arizona, Georgia, Michigan, Pennsylvania and Wisconsin — five states where Biden beat Donald Trump in the final vote count.

Although 2000 Mules has been debunked by legitimate media outlets, nonpartisan fact checkers and numerous technology experts, conservative organizations across Texas continue to hold screenings to discredit Biden's election victory. Since the film's release on the subscription-based platform Locals in early May, Texas churches including Faith Outreach Center and others have staged viewings. The Republican Party of Texas also held a series of screenings during its convention last month.

San Antonio-based movie chain Santikos Entertainment even booked 2000 Mules to play at a handful of its theaters in early May. The Current reached out to Santikos about its decision to screen the film, but representatives didn't respond to multiple email inquiries.

D'Souza, True the Vote President Catherine Engelbrecht and former True the Vote Board Member Gregg Phillips — all of whom appear in 2000 Mules — argue that the film uses technology to throw back the curtain on widespread fraud in the 2020 election. The filmmakers claim they used data collected through cell phone geotracking technology in five swing states, along with 4 million minutes of surveillance footage.

True the Vote has said it paid $2 million for the data, which allegedly shows that at least 2,000 mules visited an average of 38 drop boxes each to stuff illegal ballots for Biden. Engelbrecht argues that her organization also proves that mules picked up extra ballots from nonprofit groups working as "stash houses" for the scheme.

However, there's a big problem with 2000 Mules' claims. Nothing D'Souza shows during his 90-minute documentary is definitive proof of the voter fraud he alleges. If the movie proves anything, it's how inadequate D'Souza's investigative reporting skills are. For example, D'Souza never provides the names of the organizations moonlighting as stash houses, which would be a critical piece of information to get closer to the root of the purported conspiracy.

Also, D'Souza never shows the same alleged mule at more than one drop box. If the average mule visited 38 drop boxes to stuff illegal votes, it's curious that the film doesn't include a montage edited together of at least one of them visiting 38 — or 10 or even two — different drop boxes.

True the Vote didn't respond for an interview request from the Current, but its website attempts to explain the oversight by saying the group does, in fact, have that video but didn't use it in the final film because of its "extremely poor quality." The organization also maintains that "most jurisdictions had no video or if they did, it was (illegally) destroyed."

True the Vote promised to release "all of the raw video footage so America can see for itself" at an unspecified future date.

During testimony in front of Congress' Jan. 6 committee, former Trump Attorney General William Barr laughed off 2000 Mules when asked about any evidence he'd seen that proves that the 2020 presidential election was stolen. Numerous organizations also have debunked True the Vote's claim that the cell phone data it purchased proves anything unlawful took place.

"You could use cellular evidence to say this person was in that area, but to say they were at the ballot box, you're stretching it a lot," Aaron Striegel, a professor of computer science and engineering at the University of Notre Dame, told the Associated Press.

As easy as it is to discredit 2000 Mules, there are, of course, die-hard Trump supporters who regard the documentary as undeniable evidence of Democrats' dirty dealing.

Devine resident Loreyn Velazquez-Roman is one of those people. She said screening 2000 Mules was a "mind-blowing" experience. Velazquez-Roman, who does not "watch the news" but is active on Truth Social, believes the 2020 election was stolen and said attempts to discredit D'Souza's film are "fake news." She also argues that the U.S. Capitol was stormed on Jan. 6 by paid Antifa supporters.

When asked why so many Republican election officials have testified under oath that they have not seen any widespread evidence of voter fraud, Velazquez-Roman called them RINOs, or Republicans in name only.

"How do you believe in God when you've never met him?" she asked to rhetorically justify her belief the election was a sham.

That biblical turn brings the story back to Faith Outreach Center and pastor Flowers, who told the 65 or so attendees of his church's 2000 Mules screening that many local, state and federal elected officials are trying to "implode [the system] from the inside."

"If you've ever talked to someone who believes [the 2020 election] was the cleanest election we've ever had, it defies logic," he said. "There is something far more sinister going on. There is a spiritual element to this that blinds people's minds. We must pray that the doors shut on unrighteousness."

True the Vote's Engelbrecht and Phillips will be at Cowboys Dance Hall on Sunday, July 24 for a gathering called the Alamo City Freedom Fest. According to the event's online description, its mission is "to unite conservatives" and "[turn] San Antonio red."

The festival's organizers didn't respond to the Current's inquiries by press time.