Russian Droll: The Death of Stalin is a Timely, Pitch-Black Political Satire 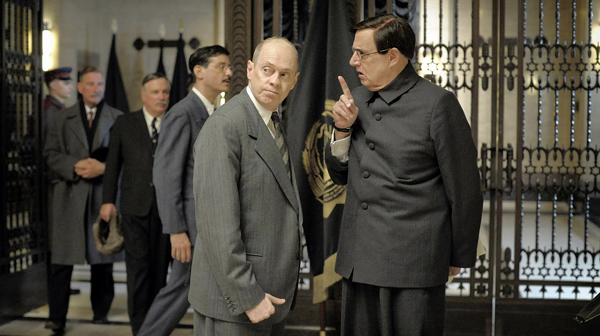 Taking the most ridiculous — and often serious — situations and creating one big, absurd narrative is what Iannucci does best in The Death of Stalin. As the old adage goes, “truth is stranger than fiction,” especially in the hands of a satirist as sharp, witty and unapologetic as Iannucci is with Soviet history.

Set in Moscow in 1953, everyone is walking on eggshells around their unpredictable leader Joseph Stalin (Adrian McLoughlin), the Soviet dictator who was known for exiling, imprisoning, torturing and murdering individuals he felt were a threat to his regime. In one early scene, Soviet statesman Nikita Khrushchev (Steve Buscemi), who ultimately helped de-Stalinize the country after Stalin’s death, dictates dialogue he shared with the dictator at dinner as his wife makes note of the jokes that didn’t make Stalin laugh, so he would remember to avoid those topics later (and avoid the possibility of getting killed).

Stalin’s officials are wound so tight, when he suffers a stroke and dies soon after, they don’t know what their next move should be. Iannucci portrays most of the men as lost puppies, specifically Georgy Malenkov (Jeffrey Tambor), who succeeds Stalin as leader and is reluctant to join his colleagues when they decide to overthrow their repulsive deputy premier Lavrenti Beria (Simon Russell Beale).

Playing out like a feature-length version of Comedy Central’s Drunk History, minus the slurred speech, The Death of Stalin is chock-full of amusing, dry British humor and earns its laughs even during some of its most disturbing scenes. Iannucci doesn’t pussyfoot around the cruel politics on display, but still manages to find subtle ways to take effective jabs at every turn. Not all the one-liners and gags are knockouts, but some of Iannucci’s gut punches are significant stingers.

Although it would probably benefit audiences to go into a film like The Death of Stalin with some idea of who the major players were during this tumultuous time in the Soviet Union, the film isn’t one that relies heavily on references to push the story forward. Instead, Iannucci banks on his finely tuned actors to deliver the farcical dialogue he and his team of writers seem to have painstakingly perfected line by line.

Banned in Russia, The Death of Stalin is a timely satire for those moviegoers who are fine with taking the film at face value — as a silly ribbing of government corruption — and those who find comfort in comparing the nonsense on screen to America’s own political reality show. No matter which camp you belong to, you’ll appreciate how The Death of Stalin is able to balance its pitch-black power dynamics with smart, classic wordplay (“When I said ‘No problem,’ I meant, ‘No! Problem!’”) and a cast of clowns who know their way around a circus.