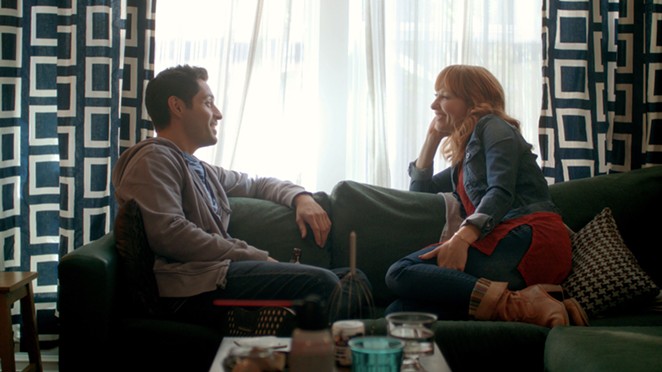 Two years after making his directorial TV debut with an episode of the crime drama Queen of the South, San Antonio native Steve Acevedo is checking off another milestone on his list of career goals — directing and co-writing a feature film.

In the romantic comedy Love and Baseball, Acevedo tells the story of a chance meeting between Will (Max Arciniega) and Michele (Tate Hanyok), a pair of strangers whose first encounter turns out to be the epitome of two people with great chemistry.

Acevedo didn’t follow a conventional rom-com narrative, however. While Will and Michele “meet cute,” their story doesn’t check off the same tropes moviegoers expect to follow their flirtatious banter. Indeed, it will probably be evident to most viewers that Love and Baseball is a different kind of film when the first scene between the pair stretches past the half-hour mark.

Instead, Acevedo splits his film into three separate, dialogue-heavy acts where at least a couple of years have passed between Will and Michele’s reunions. Think When Harry Met Sally… meets Richard Linklater’s Before trilogy. Love and Baseball, which recently screened at the Dances with Films independent film festival, is based on a play of the same name by Jerry Montoya.

What resonated with you about this love story?

What drew me in was the fact that you have these two characters who meet and fall in love and then [the story] doesn’t go somewhere sappy. It went to [a place] where sometimes things don’t work out, even when you dream that they will. It’s kind of like the opposite of a Hollywood story. I thought about how two people meet and why certain times they connect and other times they don’t. I wanted to show how complicated life really is.

Talk about the Lost in Translation moment at the end of the movie where one of the characters says something to the other, but audiences can’t hear the dialogue.

[Tate] improvised that line for every take she did. There’s some funny [takes] where she just makes shit up. The idea was that there’s always these important moments for us internally, but that the world keeps on turning. The ending for me emphasized that. For a lot of people, life is always just about trying to figure things out. You don’t always know what’s next or where a relationship is going to go.

I noticed that each act was shot by a different cinematographer. What was behind that decision?

I thought it was an opportunity to really give a distinct feel to the movie. I thought it felt more organic to have different cinematographers who were going to have completely different looks to each act. I love the way it turned out.

Are you a baseball fan yourself?

Yeah, I’m an Astros fan. I grew up going to baseball games at the Astrodome with my parents in the summer. As an adult, not as much. Obviously, there was a professional basketball team in San Antonio that took our attention. But, yeah, I grew up playing baseball. The Sandlot was a big movie for me.

Yeah, it’s amazing because there are way more good baseball movies than there are good football or basketball movies. There’s just something so romantic about baseball. I was definitely drawn to [Will’s] passion for the sport. I’ve only had one public screening of [Love and Baseball], but I can’t tell you how many times people came up to me after to tell me how much they love baseball. Baseball has this hold on people that is very different than any other sport.

Is it hard to be an Astros fan in LA?

It’s hard to be a fan of any other team in LA. When I wear my Spurs hat to Lakers’ games, they don’t like it at all. I even wore my Spurs hat to a Dodgers game, and they didn’t like that either. Even though I’ve been in LA for 13 years, I can’t lose that bond.

Does it feel surreal to finally have a feature under your belt?

It does. Even though it is a small film, it’s a lot of work. I’ve done a lot of short films and have done very well with those. But making a feature is really hard. In some ways, I am relieved that I finally got one. It feels good. [The film] has gotten a great response so far.