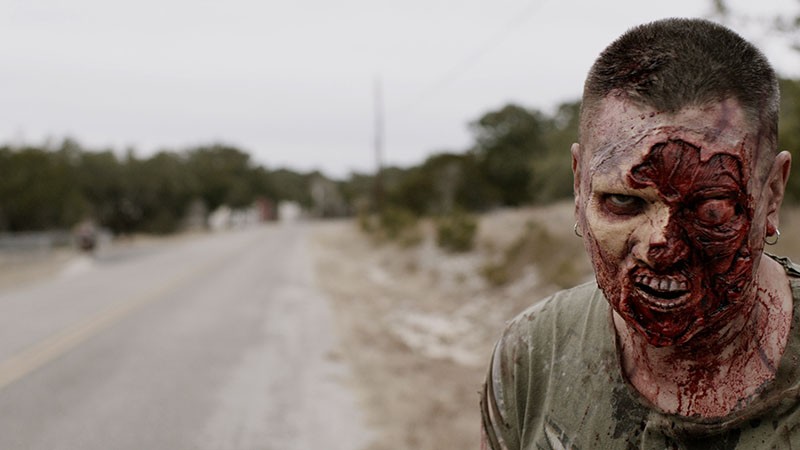 Courtesy
Some SA zombie films actually get made.

How ironic that only a week after the San Antonio Current's cover story on a fake zombie movie from a wannabe San Antonio filmmaker, another SA-based zombie flick (one that was actually made) has clawed its way into the spotlight. Shot entirely in San Antonio early last year, the zombie spoof The Walking Deceased will screen for one week at the Santikos Palladium starting March 20 and hit VOD simultaneously. Featuring a host of San Antonio talent, including actor/screenwriter Tim Ogletree and producer Derek Lee Nixon, The Walking Deceased borrows heavily from zombie movies and TV shows like Shaun of the Dead, Warm Bodies, Zombieland, and The Walking Dead. Nixon, 31, who own SA-based Aristar Entertainment Group, spoke to the San Antonio Current last week about his latest project.

Last week, San Antonio Current readers learned about a zombie movie that never got off the ground. In a general sense, how hard is it to make a zombie movie?

It's the hardest thing in the world. Making a movie is the hardest thing any human being can accomplish. It cost money and takes a lot of time. It's all about strategy and pre-production. If you don't have all your ducks in a row, you're going to fall on your face. You have to protect your investor's money like it's your own.

Do you think a project like this was picked up by a distributor specifically because of the popularity of The Walking Dead?

Oh, absolutely. Zombies are very prolific in pop culture. It's a way of life for some people. Listen, I am a strategist. I'm not necessarily trying to create art for the sake of art to impress you. I am a businessman. I have a family to support. Right now, The Walking Dead is the most popular TV show in the world. My goal was to make something commercially marketable. My last movie was called Supernatural Activity. Why did I make that? Well, because of all the found footage movies. We lined it up with the release of Paranormal Activity 3.

So, where does creativity fit into all of this?

There has to be creativity in the process. I know story and marketability and what's going to draw somebody in. I don't necessarily have to paint the picture, but I can tell the painter what color I want it to be. I give an idea for the picture to the artist who goes and paints it, if that makes sense.

How would you categorize this movie?

It's a zombie comedy. We weren't trying to make a romantic comedy or just a regular comedy. It's stupid and it references other films. We wanted to make it fun for the audience. If someone has five laugh-out-loud moments watching this film, then their time was well spent in my opinion. The last film I can say I did that with was A Million Ways to Die in the West. That's what I try to do with my movies. I just want to give people a little entertainment for an hour and a half.

Let's ignore the zombie aspect for a bit. What about the satirical aspect? There are a lot of terrible movie spoofs that have been made in the last 15 years. For example, I think anything filmmakers Jason Friedberg and Aaron Seltzer have made is unwatchable. What's your take on the state of movie spoofs today?

You know, spoofs are spoofs. Nothing is ever going to trump Airplane! or The Naked Gun. I think spoofs have created a new type of humor and sensibility that is very different than what I grew up with. Pop culture has taught us what the new comedy is. Films like Airplane! might be funny to people my age, but to the 14 and 15-year-old boys out there, they're not going to appreciate it the same way others do. We have to adapt. The shitty thing is we keep getting older and that generation stays the same age. Having to write around that is the most difficult part. Do I think the spoof movies have been killed by [Friedberg and Seltzer]? No. I saw The Starving Games. The studio that picked up my movie (ARC Entertainment) released The Starving Games. I thought it was hysterical!

So, is pop culture dictating what you do? I mean, could the next hot thing potentially be the basis of your next movie?

Possibly. The first thing I look at is the demographics of the audience we're trying to pursue and the commercial marketability behind something. In film it's all about marketing. I'm very thrifty when it comes down to budget and numbers. I don't care what people say about distribution. Anybody can get distribution. Distribution does not impress me in any way, shape, or form. That just means you got suckered into something. I don't care who you are. You're getting stiffed.

How do you quantify success as a producer?

What's your pitch to the San Antonio movie-going community to come out and see The Walking Deceased on March 20 instead of buying a ticket to the Divergent sequel?

Support a hometown filmmaker and give it a chance. It's a funny movie. It wouldn't have been picked up by ARC if they didn't see it being a lucrative piece of material for them. And it was made right here in San Antonio!