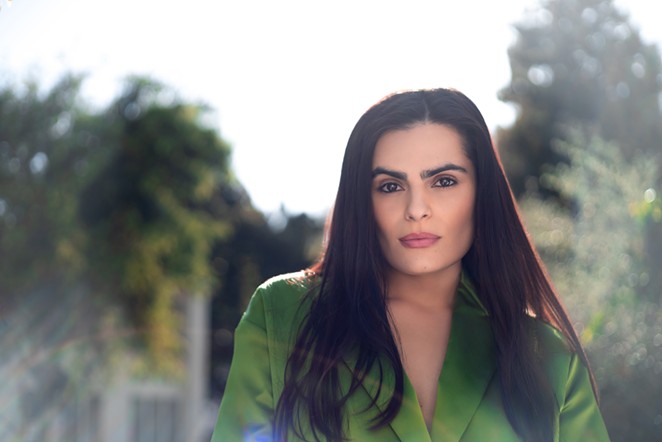 Just the same, the show and its cast — including San Antonio-raised actress Nava Mau, who's transgender — broke new ground for LGBTQ+ and Latinx media representation.

“We are very much still in the new dawn of trans representation in film and television,” said Mau, who portrayed Ana, the transgender aunt of the show's teen character Greta. “In order to break into and stay in this industry, it requires a lot of patience, resilience and support.”

Genera+ion, which focused on teens discovering their sexualities in Orange County, California, was the first scripted HBO Max series not to be renewed. The streaming service announced the cancellation last month despite fans using the hashtag #RenewGeneration to call for another season.

“I’m grateful we got to make this show at all, because there was a great deal of uncertainty in even pitching a show about queer teenagers in such a specific setting,” Barnz told Entertainment Weekly.

Mau was born in Mexico City, and her family immigrated to the U.S., settling in San Antonio when she was a child. Later, she relocated to Oakland, California. Describing her younger self as an “evidently queer and gender non-conforming,” she learned to expect being treated differently by people other than close family and friends.


In Genera+ion, Mau's Ana becomes Greta's guardian after her mother is deported to Mexico. The actress describes Ana as a “firecracker,” unafraid to express her opinions, and those opinions come into play as Greta tries to figure out her sexuality and falls for another girl.

“I think their relationship is so special because the relationship allows both of them to be free and pushes them to be better,” Mau said. “For Ana, she’s getting to see generational change, because Ana lived through a different time in terms of what it meant to be queer and Latinx and be in a family of immigrants.”


Mau said she's seen an improvement in the portrayal of racial minorities within the LGBTQ+ community from a decade ago. Back then, such characters were often used as a “punching bag” or a source of tragedy in TV shows and movies.


“I sometimes feel like I still have to pinch myself, because I can’t quite believe we have seen so much change happen in such a short amount of time,” Mau said. “I do feel a pretty heavy sense of responsibility to make sure we’re all doing our best to make those representations feel like they are doing a service, as opposed to doing a disservice.”

In addition to acting, Mau has directed, produced and written independent short films such as 2019's Walking Hour. After Genera+ion wrapped filming, Mau began production on another short, titled Work, which will premiere next year in film festivals.

The new short revolves around a queer Latina trying to find herself after a breakup while returning to work at an “underground lap-dance party.” Additionally, Mau directed an episode of the short-form web series Hidden Canyons.

Courtesy / IMDB
Actresses Haley Sanchez (left) and Nava Mau interact during a scene in "Genera+ion."
“My original goal was to study television writing and try to become a show runner. That led me to make a short film, and I ended up writing, directing, producing and starring in that short film,” Mau said. “I had to just take a chance and try it and believe in myself, so I haven’t stopped since then.”

During her upbringing, Mau pursued acting through school and community theater. However, it wasn't until later that she realized it could be more than an avocation.


“I have always gravitated towards acting, but I never considered it a possible profession for myself,” Mau said. “It really was not until I was an adult that I was able to even consider the possibility of pursuing acting and filmmaking as a career.”


Prior to her immersion in the entertainment industry, Mau earned a living in the nonprofit world. For years, she worked with violence survivors as a peer counselor at San Francisco's Community United Against Violence.


“I really gravitated towards community spaces and felt the importance of prioritizing those kinds of connections and that kind of work,” Mau said. “I just felt like I wanted to be a part of healing work, and there was nowhere else I wanted to be when I was lucky enough to be working as a counselor and community advocate.”

Despite Genera+ion's cancellation, it will remain available for viewing on HBO Max.