'San Antonio is a weird home for me,' Phillips told the Current during an interview earlier this month. 'I love it. I'm rooting for her.' 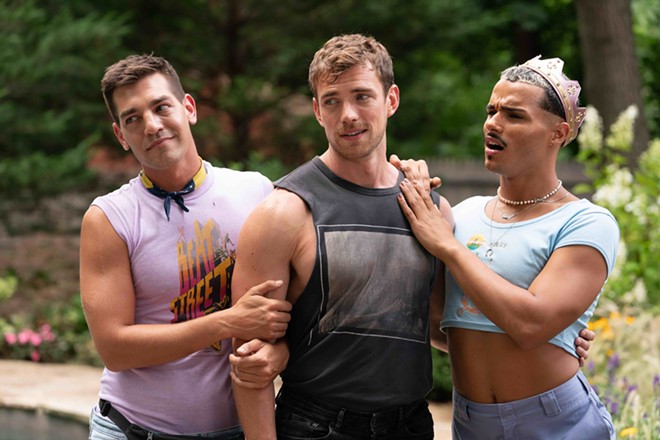 There's been no shortage of film and TV adaptations of the Jane Austen classic Pride and Prejudice, but the 1813 novel has never been reimagined quite like in Fire Island.

The Hulu original comedy movie follows a group of gay men maneuvering their way through the complicated hierarchy of the LGBTQ+ community while on summer vacation. In case you haven't read Pride and Prejudice since high school, Jacuzzies and speedos weren't in the original narrative.

Actor Zane Phillips plays the role of Mr. Wickham — or in this case Dex — a charming and manipulative new friend they meet on the island. Phillips, who starred in the fourth season of the CW vampire-werewolf series Legacies, grew up in Fredericksburg. When he travels to Texas today to visit his parents in Boerne, he likes to spend time in the Alamo City.

"San Antonio is a weird home for me," Phillips told the Current during an interview earlier this month. "I love it. I'm rooting for her. I've been taking my parents to cool spots downtown. I've told them, 'Listen, San Antonio is on the up and up.'"

Fire Island director Andrew Ahn told the Current that he enjoyed working with Phillips because the actor understood the Pride and Prejudice character he was loosely portraying — especially how the character uses his sexuality to get what he wants.

"Zane's talent and his excitement and inspiration to do the work were super apparent to me," Ahn said. "I also love that he's a good person. He's nothing like his character. It's unfortunate that his character ends up being so unlikeable."

During our interview, Phillips talked about his love for Austen's story, how he feels about non-gay actors playing gay characters and how the film takes on serious issues in the LGBTQ community. Fire Island is currently streaming on Hulu.

What resonated with you about the script for Fire Island?

I've always been a fan of Pride and Prejudice. It's something my mother raised me with. You could not leave my home without having a healthy respect for Jane Austen. I've always liked the source material and all the adaptations. I remember several years ago when [Fire Island screenwriter] Joel [Kim Booster] first tweeted that he wanted to [adapt] Pride and Prejudice. I was like, 'I want to be part of that.' It's now come full circle, which is crazy. It's like the most perfect idea. I don't know why anyone else hadn't done it first, but I'm glad we did.

How do you define "toxic masculinity" in the LGBTQ+ community?

I think when you're a part of the LGBTQ community, you try to figure out what kind of social capital you have in order to rise to the top. In this nation we live in, even as a gay man, white men have the highest standing. For a lot of people, that doesn't mean anything. But for some, there's a fear of losing this thing you have that puts you on top of the totem pole. It's all bullshit because we can't have a queer community unless we are a community.

Do you think we're past the point in Hollywood where non-gay actors will be cast to play gay characters, or do you think that will still happen from time to time?

I feel like we're still seeing it, honestly. It is one thing to have a queer character, but I think where the real representation starts to really matter is when you have queer actors, directors, writers and creatives. Suddenly, you have a broader idea of what kind of roles queers can take. Lord knows, I studied how to act straight for 18 years. At the end of the day, if I just bring myself, then I've contributed to the definition of what it means to be queer.

The film is a comedy, but it tackles serious issues too. How was the cast able to tread the line between both tones?

The spirit on a set starts from the top. Andrew created an incredibly safe environment for people to play and for them to feel comfortable and extremely vulnerable. You were dealing with some real issues. This [film] is coming from a queer brain. So, everyone is being confronted with some real insecurities. Andrew guided us through every step of the way and made us feel like we knew what we were doing.

Did you feel any added pressure because you were playing such an iconic character who has been adapted countless times before?

No, because for the most part, I just wanted it to feel honest. Jane Austen still allows [Mr. Wickham] and Lydia to end up together at the end of the book. There's no real punishment for him except having to spend the rest of his life with Lydia. But I was just trying to find the empathy in the character and what drives people to do what they do. [Dex] is not a good guy, but he's good at appearing to be one.