Ahead of Thursday's San Antonio gig, the Regrettes talk about their stylistic shift during COVID-19

The band's Paper Tiger show will include material from a forthcoming album with a pop-leaning sound. 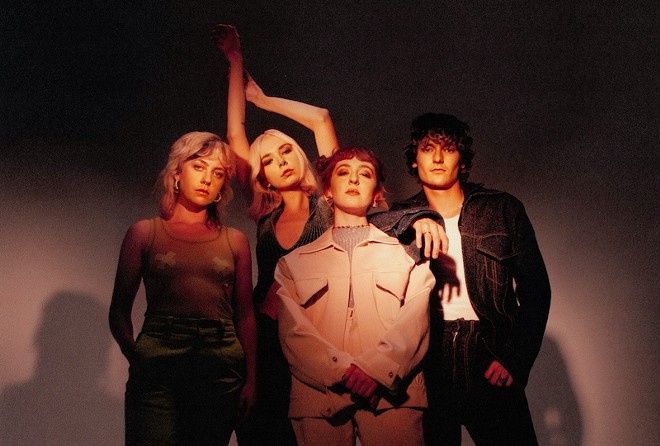 Courtesy photo / The Regrettes
Don't call the Regrettes a "girl band."
The pandemic's two-year cocoon brought plenty of challenges for artists. Even so, some found ways to benefit.

Punk act the Regrettes, led by charismatic vocalist Lydia Night, took advantage of the downtime to overhaul its sound, for example. San Antonio fans will hear the result of that retooling at the band's Thursday, March 17 show at Paper Tiger.

As a result of the LA-based group's ability to reset its approach, the pending album Further Joy is a true collaboration between its members. Scheduled for an April release, the LP also marks a shift from riot grrrl-inspired anthems to songs rooted in contemporary pop, including — gasp! — synths.

“What you hear on the album is what we hear in our day-to-day lives, what we’re listening to,” drummer Drew Thomsen said on a phone call from a tour stop in Louisville, Kentucky. These days, that's likely to include pop and hip-hop.

Does that mean the band is bracing for a “sellout” backlash?

“Everything we’ve heard so far is super positive," Thomsen said. "But it’s part of this process for us. And we’re proud that we made it past the great filter of what other people think about it. We listen to the whole thing and say, ‘We love this.’ It’s the least artistically afraid we’ve felt ever.”

For the tour, the band is augmented by fifth musician who “runs the spaceship aspects” on the backline, Thomsen said. "He’s filling out the things we can’t do,” he explained.

Though Further Joy isn’t as rooted in riot grrrl aggression as previous albums, punk rock still defines the band’s aesthetic. Just don’t call The Regrettes a “girl band.” The presence of both Thomsen and guitarist Genessa Gariano, who identifies as non-binary, makes that inaccurate.

While the sound has grown up since the band dropped its first release in 2015, Thomsen said he's pleased to see teens at the shows, sometimes with parents in tow. Some of those young attendees may even be experiencing their first concert.

“I think young people pick up on honesty," he said. "Everything we put out is us, and how we think and feel. When I was 14 or 15, I had a really good nose for what’s fake.”

Whatever the age of the audience, Thomsen said he's relieved to be back on the road after the COVID-19 downtime.

“We just can’t wait to see everyone’s faces,” he said. “It’s been the theme of the whole tour. The new songs are sounding just as good, if not better, than the rest of the set.”