Although OTTTO's members are still in high school, they tour regularly, put out their own independent releases and this summer dropped a new single. 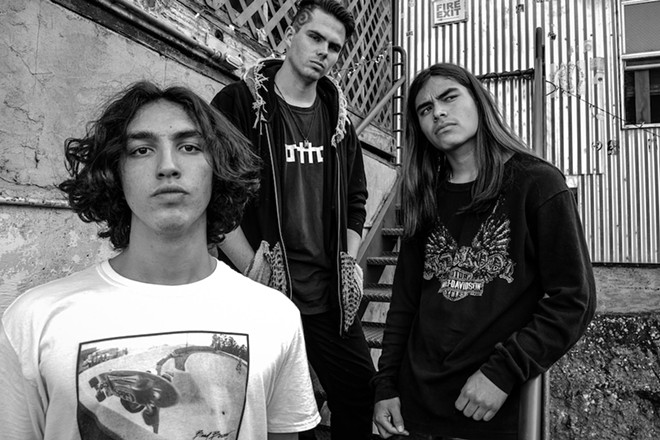 Justin Mohlman
OTTTO will perform Sunday at The Amp Room.
The young band OTTTO, which plays The Amp Room on Sunday, has some serious metal lineage. Namely, bassist Tye Trujillo is the son of Metallica bassist Robert Trujillo.

But this hardworking trio isn't content to ride on daddy's coattails. (Come to think of it, has anyone ever seeing Robert Trujillo wearing a coat with tails?) Although OTTTO's members are still in high school, they tour regularly, put out their own independent releases and this summer dropped a new single called "Skyscraper."

On his own, Tye Trujillo has filled in on bass for his dad's old band, Suicidal Tendencies. And he recorded the guitar parts for the version of Metallica’s “Master of Puppets” that played a big part in the most recent season of Stranger Things.

We caught up with Tye Trujillo to get the lowdown on what OTTTO is all about, his personal ties to metal and how the members strike a school-band balance.

Does the name OTTTO have a certain meaning or stand for anything?

At the time we got the name, we were in a hurry to look up names. So we just found it in the dictionary. I think it's like a name for a kid or something. We thought it just sounded cool. It was originally two Ts, and then we changed it to three because of copyright stuff. I feel like now the three Ts can symbolize each band member.

You guys are a touring band. How does that work while you're still in school?

I've worked it out a little bit. I'm doing like a homeschool kind of program. I still go to a place to do it. I work it out to where when I got out of town to play, I get the work done remotely, and then I do it in the hotel room and finish it up. It works pretty good. I'm glad I have that locked in, which is important.

I guess you have more time in the summer. You spent the last one on a tour with Suicidal Tendencies.

I finished off with Suicidal. We did a European run earlier this summer. Now we're doing some one-off shows. We have three shows in Orange County, California, at the end of October — which I'm looking forward to. It's been good and a great way to promote OTTTO and my projects. It's always a blast playing with those guys.

Speaking of Suicidal Tendencies, how do you feel about people knowing your dad is Robert Trujillo, the bassist from Metallica? Does it annoy you or do you embrace it?

I feel like there's nothing to do but embrace it. If I let it annoy me, then it'll just bother me. I think it's cool because I grew up watching my dad play, and then because of that, that made me wanna pick up the instrument as well. I got into it that way and started enjoying it. Then I went, "Wow this is something fun to do."

Of course your dad was probably one of your inspirations, but what other inspirations do you and the band share?

We're inspired by bands like Alice in Chains, Tool and psychedelic rock bands like Fuzz. A good musician and friend of ours — his name is Armand Sabal-Lecco — and he's just an amazing player. His bass playing and songwriting just always blows my mind and always inspires me to keep going. We're inspired by many things like surfing, hanging at the beach or just doing something we like.

Those influences can definitely be heard in your song "Thrash Doom." OTTTO has a thrash vibe to it, but not completely.

I wouldn't consider us like a full-time thrash band at all. We have elements of it in our music. Certain parts, like in our new single "Skyscraper," the ending part kind of goes into like a fast riff and then back into the groovy riff. I like that we're not full thrash — we can groove too. A little bit of everything.

In one article I read, you said you got the Stranger Things gig through the help of one of your teachers.

My old teacher back in elementary school, she knows my current teacher. Her husband is one of the producers for Stranger Things, so she reached out to my current teacher because she knew I was into music and stuff at the time — getting into playing bass and guitar. She asked my current teacher if I would be interested in laying down a guitar track for "Master of Puppets." Like a raw recording. I was like, "Yeah, that would be cool," because I know Stranger Things is a really good show and a lot of people love it. They told me what they wanted, and I practiced and got it together. I got in the studio and tracked it, and it was great. Hearing the feedback about it, and how much people love the show is amazing. It just blew up.

Was it just parts of the song you recorded, or the whole song?

As of this moment, are you guys still in the process of making a new album?

We're wrapping up some recording stuff and getting everything mixed. It'll be out March of next year. We want everybody to stay in tune for that.

You guys started the album before the pandemic, correct?

Yeah, we started working on the album before the pandemic and when everything shut down. We didn't get to start working on it again until like a few months after that. We've just been working on it ever since. Now we're super glad it's almost wrapped up. We're so antsy to get it out right now.

Did the album evolve drastically from that time? After all, it's been a work in progress for years.

Some of the arrangements changed and parts cut. We figured out how to play those songs live and experienced vocals live. Before the pandemic, we just started recording instrumentals, then after the vocals, we had to cut some parts. Stuff has changed since we started the recording process but not drastically.

Do you get more live practice compared to the rest of the band since you've been on tour a lot lately?

I would say, practice-wise we get together a lot. When I'm gone, the other members, Bryan and Triko, will run the set. When I come back, we'll have a few rehearsals and then we'll get tight again relatively quickly.

Are all of the band's releases independent?

All of our releases are independent right now. It's gonna be a sick record when it comes out.

Are you going to release more music videos in the extra time before the album comes out?

We're gonna get a video out for "Skyscraper." Hopefully we can get some more videos in the works, because I have a blast making videos. It's always fun.

You're also releasing a live album in November on the Black Friday Record Store Day.

Yup, it's called Locos Live in Venice. It's a rad album. The recordings are super raw. They're just recorded in our buddy's living room in Venice Beach — super sick.

Have you ever been to San Antonio before on tour?

I've never been to San Antonio. I've been to Dallas and Austin. I went to Austin a long time ago but I'm excited to check out San Antonio. I'm sure there's really good food over there as well. I love Mexican food.