Harris, a renowned vibraphonist, and his band Blackout will play the Carver's Jo Long Theatre. 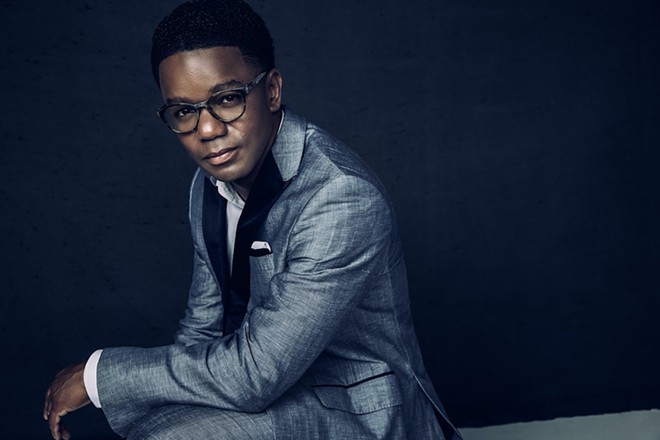 The vibraphonist and bandleader's resume includes the prestigious Martin E. Segal Award from the Lincoln Center and four Grammy nomination. Yet he works his touring schedule around opportunities to teach jazz and improvisation at local schools.

Indeed, he says education and performance are equally important to his career.

That means Harris, who performs Friday with his band Blackout at the Carver Community Cultural Center’s Jo Long Theatre, has spent the past five days sharing his knowledge with San Antonio students. And we're not talking about those in advanced music classes at college campuses.

We caught up with the artist to talk about why education ranks so high on his list of priorities and what larger lessons musicians — regardless of their ability — can learn from improvisation and interaction.

You spent a lot of time teaching younger students and your instrument, the vibraphone, probably isn’t familiar to many of them. I mean, it doesn’t show up in much current pop music. What’s their reaction to the instrument?

Marc Cary grew up in Washington, D.C., playing go-go music. So, when you listen to our album Urbanus, it begins with “Gone,” but with go-go rhythms attached. So, everything that's happening is something that's still alive and well in our world today. I think people connect to art that they see themselves reflected in. So, if I were making music that was basically a duplication of 1950, it wouldn't shock me that young people would have trouble connecting to it, but we're making music that feels like their neighborhoods. Right?

It feels like something that they've experienced in their life. And we're trying to inject as much excellence, authenticity and vulnerability into that. And I don't think that I can cater to any audience. I think the highest value in our art form is authenticity. I mean, what is the service that artists fundamentally are providing to society? I think we're essentially storytellers. Right? We work hard to develop the tools necessary to amplify voices.

And so, if you're telling the story of your world, people are going to feel connected because it's their story. It's not about just my individual experience. It's really about painting the picture of the world as I see it right now.

My objective is not to create the next generation of jazz musicians. That's not a passion of mine at all.

The reason jazz is valuable is because it is one of the best examples of authentic expression in the world, in terms of a community coming together, learning to support one another, being in the moment and being empathetic, understanding when to step forward, when to step back, how to be an effective contributor to the community. That's why jazz is valuable. As a style, I don't think that's what matters. So, I want to teach young people to feel.

All of my classes are centered around essentially giving young people permission to experience new information from an intuitive perspective. A lot of times in other fields of study, there's a lot of memorization. Right? So, you're using an intellectual approach to discern your environment. But through arts education, we actually empower people to feel their way through new experiences. And when you have the ability to engage your intuition in new situations coupled with an intellectual and mastery of craft, you're going to be much more effective than someone who's just a master of the craft.

How can you even perceive how to make a team effective in the long run if you don't understand the people around you? If you don't understand why they're there, what's going to motivate them? It's not just about having the right idea. Sometimes, the right idea will yield you the wrong results. So, these are the types of things that it doesn't matter to me whether you become a musician or you become a scientist. But I do know that in every field of study it's important that we learn to be connected and listen to one another.

Obviously, you're not just coming to San Antonio to teach. You've got a gig at the Carver. What should people expect from that?

Well, one of the things that I love about working with my band is that we love one another. This is a collection of people that have known each other for decades at this point. And we're incredibly connected. We surprise each other night after night. And I think there's a lot of joy, and there's a lot of vulnerability, and there's a lot of soulfulness. So, we just have a great time. And I can never tell someone in advance exactly how a concert is going to go, because we really don't know. But we are really always excited about getting onstage and coming together as brothers to create something of beauty far beyond what any one of us could do alone.

Can you talk about your most recent album?

Sure. The most recent album is called Sonic Creed. And Sonic Creed, I think, is a great example of the underlying concept of the band, what we were just talking a moment ago about jazz. Our approach to living in that space that people call jazz. It's really about cultural legacy. And for us, we look back at our cultural heritage, and we include classic pieces of music, but we do it in a way that our ancestors would be proud of us for.

I don't think our ancestors would've wanted us to just repeat the work that they did. I think they would want us to continue the vital work of amplifying voices in the world, of speaking our truth, so that we can all know one another, so that we can learn about the people who are different than us, so that we can find a middle ground. That's kind of the underlying concept of the Sonic Creed. It really is about our dance with legacy.

It's interesting, I was listening to some of the standards you've done. They have modern influences like hip-hop, for example, but they're still very recognizable as that original piece of music.

Yes. We try. And the other thing is, I think, with Blackout is it's not just about creativity. Sometimes people take a standard and they twist it and do it in an odd meter and things of that nature. That's not what motivates us. Because of who we are as individuals, we bring our personal, emotional, authentic vulnerability to our choices and how we arrange music. So, I think our music has a little bit more of a soulful edge than a lot of other choices others may make.

It sounds like you're saying that when you're updating this music you don't want to over intellectualize and ruin the essence and the soul of those pieces.