King Of The Brown Sound: The Music And Social Movements Of Little Joe 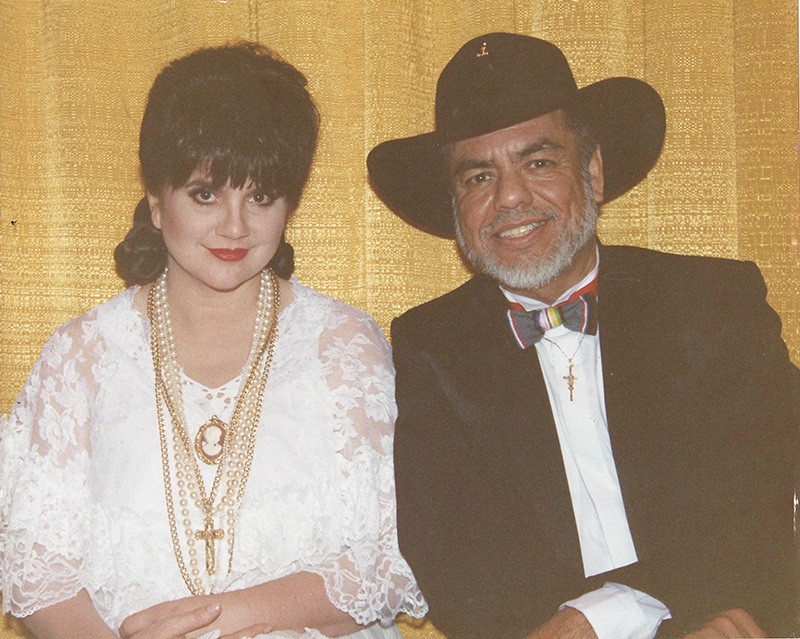 Courtesy
Humble and all, but Little Joe hobnobbed with many stars, such as Linda Ronstadt, above.

By 1959, Coronado split from the Latinaires, leaving Joe as the band's frontman. With the introduction of Little Joe's little brother Jesse on bass, the restructured Latinaires quit their day gigs and made a run at a recording career. In 1963, the band released Incredible! and Unbeatable!, a pair of exclamatory LPs on San Antonio's DLB label. The albums are solid funk records, with occasional sections that might betray the rhythms of their Tex-Mex roots. Though Little Joe's impressive range is on display, he had yet to develop the style that would help create the genre of Tejano. On Unbeatable! he sounds like a talented James Brown impersonator.

Also in '63, Little Joe found inspiration in San Antonio's Sunny and the Sunglows. With "Talk to Me," a string-kissed vision of teenage love in 6/8, Sunny Ozuna and his SA band reached the 11th spot on the Billboard chart and played on Dick Clark's American Bandstand (Sunny was the second Chicano performer on the show, after Ritchie Valens in '58).

"It made me feel so proud to know that there was a Chicano on American Bandstand," says Joe. "It inspired me and made feel that I too could make a career and make things happen with my music. He set a high bar for all of us."

Though his career was picking up in the dance halls of Texas and California, tragedy struck in 1964 when Little Joe's brother was killed in a car accident. Inspired by Jesse, who convinced Joe to pursue music full-time, the Latinaires pushed forward into the '60s.

Little Joe found his true creative voice in the Bay Area in the late '60s, from where so many pop music origin myths emanate. As the flower children bum-rushed the Haight Ashbury neighborhood, Latin American musicians found a home in the same thriving scene. "It was there that I saw all these hip guys speaking Spanish and really embracing it in their music," says Joe. "The Latin thing was really happening, with Carlos Santana and Malo especially."

Living in California, Little Joe changed the band name from the Latinaires to La Familia, reflecting the Chicanismo of the music around him. "When I got to the Bay Area, I felt and saw a difference," says Joe. "La Familia felt inclusive and let people know what we're about."

Right away, the music echoed the realignment toward Latin America. The horn section gained members and prominence, borrowing from the booming frontline of orquesta. The rhythmic backbone moved from the downbeat — that bastion of soul and funk — to the punching upbeat of conjunto and norteño. The lyrics slipped into something more comfortable, trading English for Spanish. And the accordion began peeping its piano-key grin into the picture.

In performance, Joe was absorbed in this nueva onda. Footage from PBS' Latin Music USA shows La Familia in the early '70s riffing with excitement on "Las Nubes." In crimson fringe and gold-laced gear, Joe coyote-yelps with delight, rallying the band into a full charge.

Concerts like these, with younger generations roaring and older ones two-stepping in approval, helped set the stage for Tejano, a localization of Chicano identity and pride.

"The Chicano movement was representing people not from Mexico, but people from the Southwest region of the United States taking ownership of their own identity and unifying with Latin America," says JJ Lopez, general manager of Trinity University's Jazz 91.7 and Texas vinyl junkie. "Bringing Mexican genres into the soul-driven music he was doing, Joe helped create Tejano in the '70s. Little Joe was there to really take that onto the world stage."

"Santana made it Latin rock, with 'Oye Como Va' and all that," says Little Joe, explaining the process. "That's very much the same thing I did with the Mexican songs, mariachi, orquesta and Mexican genres. I just do it in a bluesy way 'cause that's the music that I grew up listening to. Our culture has such a rich foundation in music, I was fortunate to learn those songs. The difference is I do 'em my way."

While Joe was at the forefront of Tejano music, buoyed by the phone call with César Chávez, he became part of the political push too. Shortly after they met, Little Joe began fundraising tours for Chávez and his United Farm Workers. "In the '70s, these were the guys out there leading the march," says Joe. "The identity that was missing that we needed was provided by these Chicano leaders."

"When we all hear that, it's like, 'there's our song, let's go dance,'" UFW president Arturo Rodriguez, a San Antonio native, tells the Current in an interview. "It's tremendously emotional when Joe sings his heart out about the life and dreams of farmworkers as he does in that song."

Written by Wally Armendariz, "Las Nubes," or "The Clouds," takes the suffering and wandering of a migrant worker and casts it back out, singing proudly of the will to rise above. "The clouds that go by stop to drizzle on me / It seems as if they're smiling whenever they hear me sing," goes the refrain, as the horns blare and the rhythm section rocks forward.

"That song relates so well to the farmworkers," says Little Joe. "People who've been out in the field. That's the song about oppression, hope, liberation. It goes well with what we cotton pickers are about."

After his involvement with UFW, Little Joe's presence became something of a must-have for Democratic political campaigns. From Leticia Van de Putte and Ann Richards to Jimmy Carter, Bill Clinton and Jesse Jackson — whenever a politician needs Tejano cred, Joe is high on the list of names.

But it's not all been by the PR book. Joe recalls Henry B. Gonzalez onstage with La Familia at an SA fundraising gig, with a joint in Joe's mouth as the congressman introduced the band.

"He's so consistent, he's not Johnny-come-lately," says Arturo Rodriguez. "He's not someone who all of a sudden realized an opportunity to help farmworkers. He's been doing it decade after decade."

In between political appearances, Joe helped create and hone the Tejano sound, a musical force that reached full stride in the '90s. In the Tex-Mex heyday of Selena, Mazz and La Mafia, Joe y La Familia's 16 de Septiembre won the '91 Grammy for Best Mexican Performance.

But perhaps the greatest honor bestowed upon Joe is "King of the Brown Sound," reigning over both sides of the border. But, again with that perennial humility of his ruling the day, don't think for a minute any of it ever got to his head.

"I don't know about being king of it, or any title," says Joe. "King of Tex-Mex, King of the Brown Sound, El Rey. It's all appreciated, I just don't know if I can live up to all the hype. I'm humbled by all the attention, credit and respect, above all."