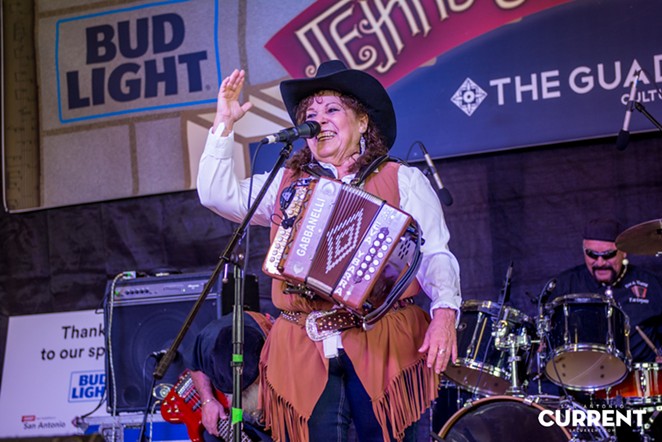 Ybarra, whose impressive and groundbreaking career has spanned more than six decades, is one of nine recipients of the 2017 National Heritage Fellowship presented by the National Endowment of the Arts, the organization's highest honor.

As really the only widely-recognized female conjunto accordionist and bandleader, Ybarra is a true trailblazer, bringing a fiery passion to her playing, writing, and singing, all the while making technical genius at her instrument look exasperatingly natural, easy even. There's not a single stubborn old vato who would deny Ybarra's greatness, especially not to her face.

Musically and in terms of her presence itself, Ybarra deftly toes this strange line: she's rough and rugged, yet she's also emotive and openhearted and full of the midnight melodrama of the music she adores. From cumbias and country to banda, straight-up polkas, and rancheras, Ybarra has mastered and left her mark upon the genres that describe the beating heart of Texas itself.

Aside from sheer bragging rights, Ybarra will receive a $25,000 prize and be honored at a September ceremony in the nation's capitol. ¡Orale Reina!