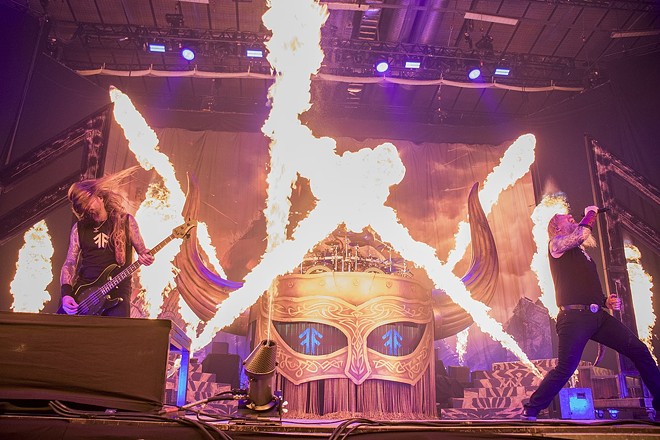 Wikimedia Commons / WanderingTrad
Amon Amarth is riding high on its new album The Great Heathen Army.
For those seeking musical star power and an evening of nostalgia '80s rocker-turned-'90s pop star Belinda Carlisle might be just the ticket.

For those seeking something a little less safe, there's always the psychedelic cumbia-meets-Americana of Making Movies or a raging metal bill headlined by Viking headbangers Amon Amarth.

In other words, it's a diverse week for live music in San Antonio. Let's dive in deeper.

The German-born, Ukrainian-raised singer Igor Yuzov studied in the Soviet Union and left for the States as soon as possible with his self-described "folk 'n' roll" band Limpopo. In 1993, the band won TV talent show Star Search, giving a boost to its popularity. A 1995 dream involving Elvis Presley prompted Yuzov to turn up the rock component and change the band's name to Red Elvises. Large street performances on the Santa Monica promenade built on the troupe's kitschy charm. The band's raucous live sets still get audiences moving thanks to infectious grooves and a big shot of humor. $12-$50, 8:30 p.m., Sam's Burger Joint, 330 E. Grayson St., (210) 223-2830, samsburgerjoint.com. — Danny Cervantes

Belinda Carlisle rose to prominence as the singer for '80s "girl group" The Go-Go's, then also managed to strike gold with a solo career that followed. While the Go-Go's came up at the edge of the punk scene, Carlisle had fully embraced pop by the time she released her solo debut Belinda in 1986. Her solo hits "Mad About You" and "Heaven is a Place on Earth" became inescapable radio staples around that time. This show looks likely to include tunes from both sides of Carlisle's career, since she's performed a handful of Go-Go's tunes at prior stops on this tour. $36.50-$74.50, 7:30 p.m., Tobin Center for the Performing Arts, 100 Auditorium Circle, (210) 223-8624, tobincenter.org. — Mike McMahan

If you're gonna attend a multi-band bill, it's always a treat when the acts aren't too similar. That can be a high bar to clear given the way tours are packaged, but rapidly rising East Coast hardcore outfit Turnstile has embraced variety by taking '90s-inflected indie darlings Snail Mail on the road for its latest tour. Turnstile has been on a winning streak any band would envy, having garnered accolades for its amazing 2021 release Glow On and landing opening spots with My Chemical Romance and the upcoming Green Day and Blink-182 tour. But don't kid yourself: they're the real deal and got to this point the old-fashioned way. And if they want to mix up their own tour's bill, more power to them. $50 and up, 7 p.m., Aztec Theatre, 104 N. St. Mary's St., (210) 812-4355, theaztectheatre.com. — MM

Rock act Making Movies mixes up a diverse sound drawing from cumbia, psychedelia and Americana roots — but somehow makes it all work together. That diversity may be explained by the fact that the band members originally hail from Panama, Mexico and the U.S. The group is a big proponent of Latinx activism and has collaborated with salsa legend Rubén Blades, also no stranger to mixing music and politics. Steve Berlin of Los Lobos produced three of Making Movies' albums, adding to its Latin rock credentials. $16-$18, 7 p.m., Vibes Underground, 1223 E. Houston St., (210) 255-3833, therockboxsa.com. — Brianna Espinoza

Ginger Root is the aggressive elevator soul project of multi-instrumentalist, producer and songwriter Cameron Lew, who records solo, creating sonic soundscapes driven by bouncy rhythms and gauzy lyrics. The act's latest EP Nisemono is built on the concept of Ginger Root being thrust into the spotlight after a fictitious Japanese pop star quits before an appearance on a late-night show. Opener Vicky Farewell will set a chill mood with her mellow, downtempo soul. $18, 8 p.m., Paper Tiger, 2410 N. St. Mary's St., papertigersatx.com. — DC

With a band name lifted from J.R.R. Tolkien and lyrics steeped in Viking history, Sweden's Amon Amarth creates an appropriately epic sound. Its chugging riffs and singalong choruses seem constructed to serve as the soundtrack for plunderers rowing a longship. Riding high on its new album The Great Heathen Army, Amon Amarth has also put together a package tour that acts as a sampler of some of the best the death metal genre has to offer — including Carcass' ferocious-yet-melodic take on the genre, Obituary's down-and-dirty old-school approach and Cattle Decapitation's environmentally conscious deathgrind. $49.50-$159.50, 6:30 p.m., Aztec Theatre, 104 N. St. Mary's St., (210) 812-4355, theaztectheatre.com. — BE