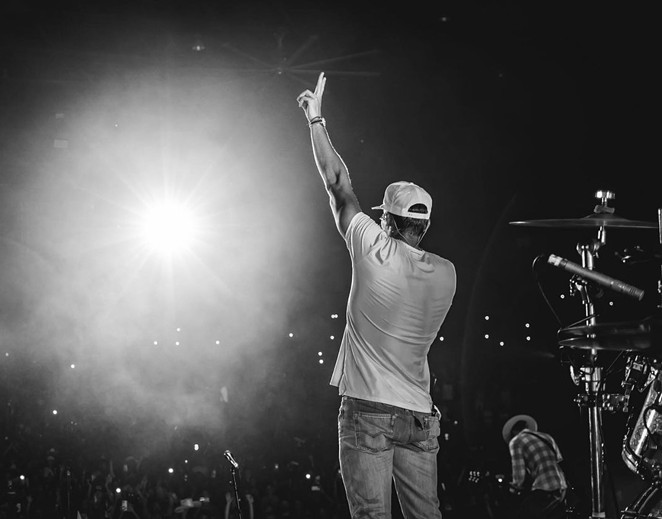 Instagram / parkermccollum
Texas Native Parker McCollum will play SA's AT&T Center Saturday.
Another is Christmas in the rearview mirror, which puts New Year's Eve ahead as our next chance for revelry.

Fortunately for music fans, there are at least three noteworthy touring acts helping San Antonio ring in the new year — from legendary Tejano performer Little Joe to roots rock rabble rousers the Mavericks. Raise a glass for us, and be safe so you can catch some noteworthy New Year's Day shows as well.

The Mavericks
These genre-fluid roots rock pioneers will celebrate the end of 2021 with a sold out, three-night stand that promises surprises. Not many acts can boast of winning Country Music Association Awards while also playing gigs with Marilyn Manson early in their career. Founded in Miami in 1989, the Mavericks have endured personnel changes and two breakups to emerge at the top of the heap. The band’s most recent LP, 2020’s En Español, is their first sung entirely in — you guessed it — Spanish. Sold Out, 7 p.m., Gruene Hall, 1281 Gruene Road, New Braunfels, (830) 606-1281, gruenehall.com. — Mike McMahan

Little Joe y La Familia, The Hernandez Brothers
Boasting over 65 years as an entertainer, Little Joe will help San Antonio music fans ring in 2022 along with his band, La Familia, and The Hernandez Brothers. Little Joe has cited growing up in a heavily African American neighborhood in Temple as a key influence on his sound. He enjoys and utilizes horns more than many of his Tejano peers and has even said he’d have loved a career in jazz. He won his first Grammy in 1992 for 16 de Septiembre. $38.50-$83.50, 9 p.m., Tobin Center for the Performing Arts, 100 Auditorium Circle, (210) 223-8624, tobincenter.org. — MM

Zach Person
Guitar Hero Magazine has given Person a thumbs up as a six-string savior for his generation. While that remains to be seen, the Austin-based artist and former American Idol contestant has managed to shake up the well-worn blues-rock sound by incorporating electronic elements — and, yes, some guitar heroics. $15, 8 p.m., Sam’s Burger Joint, 330 E. Grayson St., samsburgerjoint.com. — Enrique Bonilla

Parker McCollum
Texas native Parker McCollum went from rootsy Americana to country-pop star in a little over five years’ time. Now, he’s now signed to a major label and making a stop at the AT&T Center. Wonder if his hit song “Hell of a Year” will hit differently after the dumpster fires of the past two years? Flatland Cavalry will open the show. $24.50-$399, 7:30 p.m., AT&T Center, 1 AT&T Center Parkway, (210) 444-5000, attcenter.com. — BE