With Ministry, 311 and Powerman 5000 all playing shows, could there possibly be a more '90s week in live music? 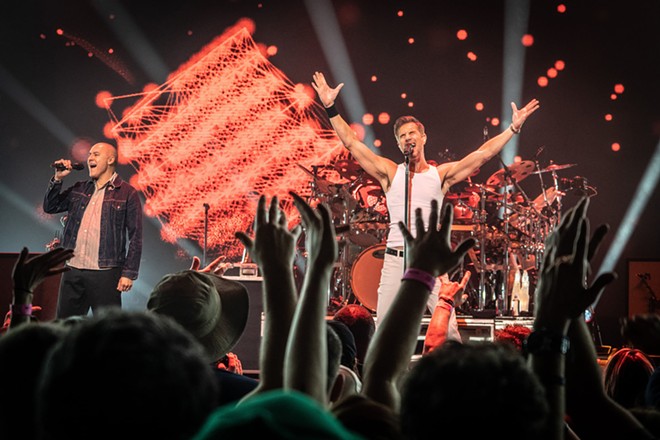 Pull on your baby doll T-shirt, shrug into your flannel and strap on the ol' fanny pack, because the '90s will dominate live music in San Antonio this week.

Don't believe us? Ministry, 311 and Powerman 5000 are all headed to the Alamo City. Not as part of the same nostalgia package, mind, but as headliners for separate fricken shows.

Hell, the only way to top that for pure '90s nostalgia that would be an IMAX double-feature of Forrest Gump and Titanic sponsored by Zima with a free Tamagotchi pet handed out to the first 200 people through the door and Doritos 3Ds available at the snack bar.

But we digress. Whether or not you're keen to relive last decade of the 20th Century, don't sleep on this week's numerous live-music options.

The legendary industrial-metal act fronted by Al Jourgensen continues to lean heavily on thrashy guitars and over-the-top lyrics even decades after it first burst onto the scene. What started as a synth-pop group dropped any pretense of that sound vanished by the time the band dropped its 1989 magnum opus, the metal-fueled LP The Mind is a Terrible Thing to Taste. Ministry's latest, Moral Hygiene, landed in October 2021 and even features a cover of the Stooges' "Search and Destroy." That title could be the mantra for Jourgensen's career, if you want to get right down to it. Legendary alt-metal pummelers Melvins share the bill. $44.50-$180, 6 p.m., Aztec Theater, 104 N. St. Mary's St., theaztectheatre.com. — Mike McMahan

This brother-sister pop duo has made a name for itself over the past 15 years with its Spanish love ballads, as evidenced by a pile of Latin Grammy accolades. While their soft musical approach evokes older Ed Sheeran, the duo also shines on upbeat tunes such as "Tanto," which features Luis Fonsi. $49.50-$149, 7:30 p.m., Aztec Theatre, 104 N. St. Mary's St., (210) 812-4355, theaztectheatre.com. — Brianna Espinoza

LA-based act Iya Terra features four dudes with dreadlocks, which is to be expected from a band that combines reggae and dub. Why they let that fifth guy get away with short hair is unknown. But we do know is that the band made inroads towards the top of the Billboard Top Reggae Album charts, and in 2020, the quintet contributed a song to The House That Bradley Built, a compilation record paying tribute to late Sublime frontman Bradley Nowell. $18-$100, 7 p.m., Sam's Burger Joint, 330 E. Grayson St., (210) 223-2830, samsburgerjoint.com. — MM

College Station's diverse yet accessible Surfaces has been burning up the Billboard pop charts for the past two years. The group's poppy take on soul, jazz, hip-hop and calypso has garnered critical acclaim as well as a collaboration with music legend Elton John. $29.50, 8 p.m., Aztec Theatre, 104 N. St. Mary's St., (210) 812-4355, facebook.com/theaztectheatre. — Enrique Bonilla

Indie rockers Together Pangaea are touring in support of its release DYE, released in October of last year. Hailing from Santa Clarita, California, the group is rooted in garage rock with rippin' solos, but also expect some pop-punk elements and sophomoric lyrics reminiscent of Blink-182. Together Pangaea have shared the stage with Ty Seagall and Wavves. The band also will tour with the extremely awesome Skating Polly later this year. 7 p.m., $18-$22, Paper Tiger, 2410 N. St. Mary's St., papertigersatx.com. — MM

Omaha, Nebraska may not seem like the most logical starting point for a band rooted in blending hard rock with funk, rap and reggae. Just the same, 311 built quite a brand over its 30-year career. Beyond the tours and music releases, that includes the band's own own line of cannabis products and themed Caribbean cruises. $49.50, 8 p.m., Majestic Theatre, 224 E. Houston St., (210) 226-5700, majesticempire.com. — EB

Industrial rockers Powerman 5000 are heading back to town, presumably with their cyber goggles and colored spiky hair in tow. The group's Tonight the Stars Revolt! album cracked the Billboard Top 30 back in 1999, so we're guessing someone still remembers. $17-$20, 8 p.m., Paper Tiger, 2410 N. St. Mary's St., papertigersatx.com. — BE

Despite metalcore juggernaut Atilla's fierce-sounding name, party rock is the vibe. Breakdowns, beer and sweat await those who pull up to Rage Fest, which the band will headline at Vibes Event Center. Atilla has been through San Antonio frequently, so we're guessing plenty of faithful know what to expect. He is Legend, Islander and Crown Magnetar kick things off. $23, 7 p.m., Vibes Event Center, 1211 E. Houston St., (210) 255-3833, facebook.com/vibeseventcenter. — EB