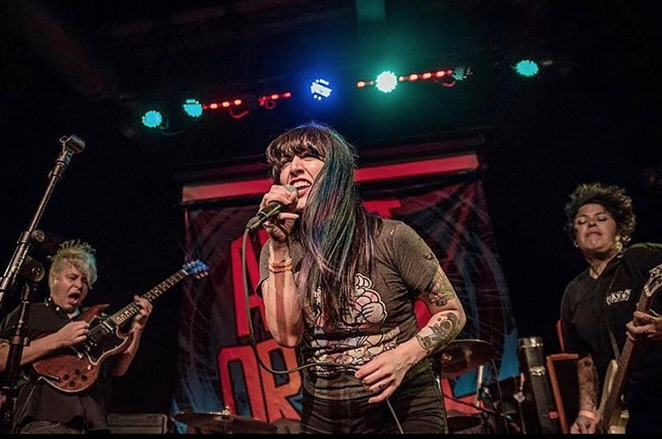 It’s happened to all of us at some point. You leave your room key in your room accidentally and get locked out. It’s a bummer, but usually gets sorted out.

However, this wasn’t exactly the case with Fea members Bobby Rivas and Letty Martinez.

After playing a show at the Grog Shop in Cleveland, Ohio last Thursday night, the band made their way back to a room at the Hilton that a generous fan had gifted them.

According to guitarist Bobby Rivas, who spoke to the Current over the phone, he and Martinez stepped out for a cigarette in front of the hotel around 3 a.m.

Realizing that they had forgotten their room key, the pair approached the front desk and asked the clerk for another key.

A simple request was met with antagonizing threats from the clerk, not believing that Martinez and Rivas actually had a room.

“She actually kicked us out of the hotel,” Rivas said. “That’s what made us angry: we had a room that was paid for, our stuff was in the room, we just needed a key, and the [clerk] just became rude and aggressive and told us we had to leave.”

Drummer Phanie Diaz eventually came down to the front desk with the room key after the pair texted her about the escalating situation. But by the time she arrived, Martinez, Rivas and the clerk were already in a heated yelling match. Oh, and and the clerk had already called the cops.

Rivas recounts that six squad cars and thirteen officers showed up to the hotel.

“The cops show up and they’re like, ‘what’s the big deal here,’ ‘was there a fight?,’ can we resolve this,’” said Rivas. “The cops are actually being halfway-chill, [but] the lady was livid with us and we're getting angry with her and she just says [to the police officers] ‘these two need to be arrested – they’re causing a huge disturbance.”

Around 5 a.m., Martinez and Rivas were arrested and booked at Cleveland's Justice Center Complex where they were held for about 12 hours.

The band posted two videos of Rivas and Martinez being released:


“Agent Orange, the band that we’re tour with and our booking agency was really cool and really supportive about [the situation],” Rivas said, “Everyone had a sense of humor about it, but we were bummed we didn’t get to play a show. We had fans that wanted to come see us – that’s the thing we were most angry about.”

Fea is on their way for a show at Brighton Hall tonight before wrapping up their tour in Tulsa at the end of the month.