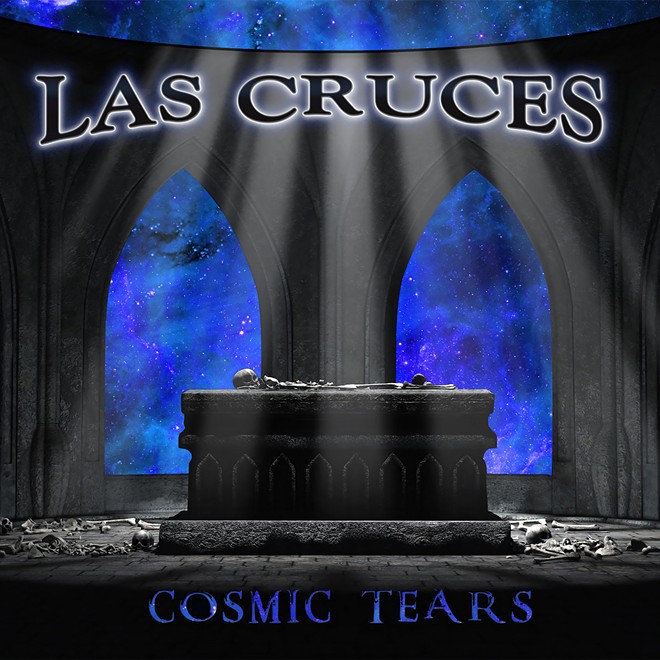 Courtesy Image / Ripple Music
On Cosmic Tears, Las Cruces plays to its primary strength: delivering the kind of tough and timeless riffs, slow tempos and foreboding atmosphere pioneered by groups such as Black Sabbath and Trouble.

While revered in underground circles, San Antonio-based doom metal band Las Cruces has been plagued by a release schedule even slower than its lumbering riffs.

Formed 28 years ago, the group dropped a pair of '90s-era albums that garnered critical praise and helped it land enviable slots at metal festivals. However, since then, revolving-door lineup changes prevented it from putting out anything other than a 2010 EP.

That means Las Cruces' long-awaited new album, Cosmic Tears — released last month on high-profile stoner label Ripple Music — has been a dozen years in the making. The band will perform Saturday, July 23 at Burleson Yard Beer Garden to celebrate the new LP with Peth and X.I.L. rounding out the bill.

In the years since Las Cruces' last release, doom has undergone the same subgenrefication as the rest of metal, with bands delving into narrow specialties such as death doom, funeral doom and the like. That could spell trouble for an ensemble determined to keep up with evolving tastes and revolving trends.

Fortunately, on Cosmic Tears, Las Cruces plays to its primary strength: delivering the kind of tough and timeless riffs, slow tempos and foreboding atmosphere pioneered by groups such as Black Sabbath and Trouble. Sadly, though, the album was the last for drummer Paul DeLeon, whose often-introspective lyrics seemed to predict his own 2021 death during the COVID pandemic.

Despite DeLeon's untimely passing and the ominous sound of the recording, it feels like something of a rebirth for Las Cruces — thanks in part to new vocalist Jason Kane, whose powerful tenor brings an accessibility to the proceedings. While doom metal too often suffers from singers whose anonymous, post-Ozzy caterwauling is best buried in the mix, Kane is a forceful, emotive presence.

The approach is particularly powerful on Cosmic Tears' epic title track, a nearly eight-minute showcase for the band's versatility. An ominous, angular opening riff gives way to subdued and mournful verses, soaring choruses and a thudding interlude full of wah-driven pyrotechnics from guitarists Mando Tovar and George Treviño. Along the way, DeLeon's drum work highlights the dynamics, toms rumbling at all the right places, kick drum driving as the song reaches full throttle.

On "Wizard of the North" and "Egypt," the clarity of Kane's voice evokes the lyrics' eerie fantasies, keeping them distinct from the appropriately thick and lurching riffs. Jimmy Bell's slithering bass opens "Terminal Drift," a psychedelic interlude that provides a little breathing room amid the heaviness. While more subdued, the tune sacrifices none of the album's sense of pervading calamity.

In the end, Cosmic Tears is a 10-track doom masterpiece with the potential to sate patient Las Cruces fans while luring in a new generation of listeners looking for a dose of the heavy stuff. Let's just hope the band won't take 12 years to release the follow-up.