Standin' At The Crossroads: San Antonio's Importance as a Field Recording Hotspot 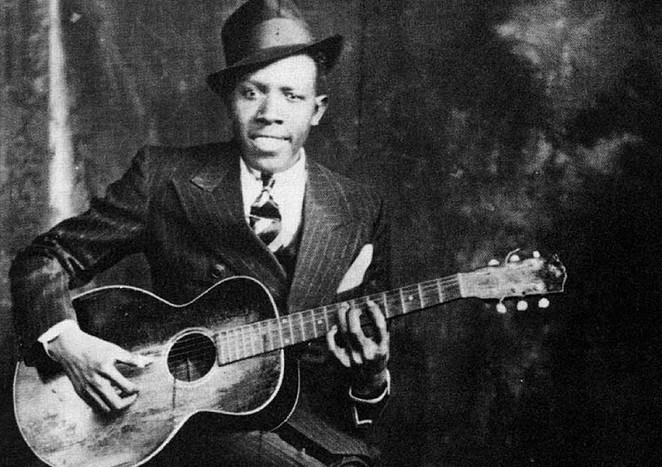 Room 414 of the Sheraton Gunter looks like most every other hotel room downtown — a decent TV, a polite color scheme, lamps with on-switches that I can never find. But 78 years ago, Room 414 became a legend of the blues, thanks to Mississippi enchanter Robert Johnson and a 300-pound recording machine.

After lugging the fat wax recorder up to the fourth floor, recording engineers from the Brunswick label posted up in the bathroom, setting Johnson and the machine against the wall facing Houston Street.

"Why in a room like that?" asked Tim McDonald, Director of Operations at the Sheraton Gunter. "As you can see in the picture, he's up against the wall. A lot of people thought he was shy, I don't think that for a second. It's to get natural reverb off the wall."

Reverb and all, the tunes from the Gunter session made Johnson $10 to $15 per track. For the Brunswick and Vocalion labels, the session made a good deal more, with the modest hit "Terraplane Blues" selling 5,000 copies. But for blues appreciators, the Gunter Recordings are invaluable as a document of the Mississippi Delta style, a sound and culture that would change with the Great Migration and the intrusion of the electric guitar.

Though it is San Antonio's most famous session, the Gunter date was only one of dozens of vital field recordings set in the Alamo City. In the early 20th Century, field recording was the only option for labels wanting to capture sounds away from the coastal capitals.

"The professional recording studios were in Los Angeles and New York, and mostly in New York," said McDonald. "The music of the US went through New York. Being in this region of the country, they had to find some type of makeshift thing."

The solution was the wax recorder. A 300-pound "mobile" device, engineers had to lug across the country — our condolences to the engineers' pre-Model-T horses.

After the recording was laid down, straight from microphone to groove spirals on beeswax, the thick cylinders were in danger of melting in the heat. Engineers placed the wax on ice, before and immediately after the musician was recorded. Of the early sessions in Texas, very few of them took place in the summer.

The earliest field recordings in San Antonio date back to the technology's dawn hours. In 1893, just six years after he invented the phonograph, Thomas Edison sent a team of engineers to record the folk drama Los Pastores in a long-forgotten San Antonio hotel.

After the century turned, another father of field recording began working in San Antonio. John Lomax, the bustling UT musicologist, recorded a black saloonkeeper performing "Home on the Range." Laid down in 1908, the tune was featured on Lomax's first anthology, 1910's Cowboy Songs and Other Frontier Ballads.

In the 1920s and '30s, as interest turned commercial, the Victor, Vocalion, Decca and Brunswick labels all hit San Antonio to capture the unique music of this crossroad of South Texas. With conjunto musicians from the Rio Grande Valley, black bluesmen and white hillbilly musicians (the proto-genre of country), San Antonio covered several markets at once — in an era of instant recording and communication, it's hard to imagine what was considered convenient in the early 20th century.

From an outside perspective, it's also hard to imagine the significance of these recordings outside of the libraries of 78-rpm nerds. But these San Antonio sessions place a finger on the intangible, documenting the lost cultures of what music critic Greil Marcus calls "the old, weird America."

Men like Robert Johnson, whose births can be gauged only by the year, are suddenly made real on a Vocalion 78, standing against time with his immense talent.

"It's spine-tingling music," said McDonald, on Johnson's work. "Soul before it was called soul."

The music brings focus to the Southern cultures lost to time, or gobbled up by the national pop culture behemoth. A Delta blues voice like Johnson's recalls the field hollers of slavery, and later, of sharecropping and prison work, when music was a form of survival against an inferno of heat and forced labor.

Mark Twain, who knew a thing or two about America, once said: "There are only four unique cities in America: Boston, New Orleans, San Francisco and San Antonio." In 2015, the city of barbacoa and Big Red is doing a better job than some in retaining a local flavor against the monoculture that stretches on highways from sea to shining sea.

But, in a globalized world, that Hohner accordion comes from Southern Germany and that Spurs tee from East Asia. Queued up on the stereo, a Robert Johnson recording is a step back through time to a city culture imitated by none.