The Influential Electronics of Kraftwerk 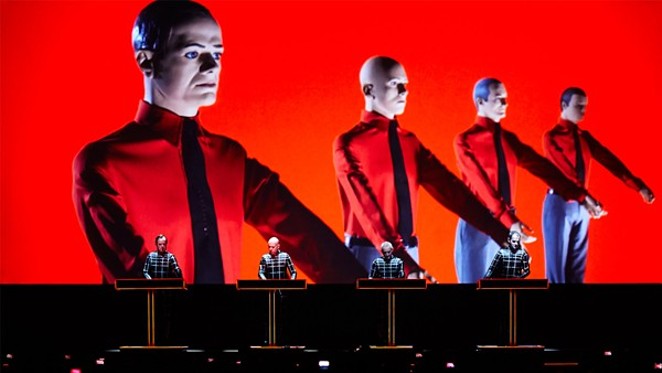 Courtesy
"We are the robots"
Tonight Kraftwerk, the German pioneers of electronic music, make their first appearance at the Tobin Center in San Antonio. Hailing from Dusseldorf, Germany, the current members are Ralf Hutter (founding member), Fritz Hilpert, Henning Schmitz, and Falk Grieffenhagen. The list of ex-members is both extensive and impressive (original members Klaus Dinger and Michael Rother split to form the influential krautrock band Neu!). Over the years the band’s discography has become the core fabric for most synth-pop, hip-hop and dance music. Samples have appeared on tracks from musicians such as Afrika Bambaataa to New Order to Coldplay. Kraftwerk was so ahead of it’s time there wan't even a genre or sub-genre that encompassed their sound. Founding member Ralf Hutter described their style as elektronische Volksmusik, or ‘electronic people’s music.’

Musicians today are privileged with the abundance of technology available at their fingertips—from Garageband phone apps to Ableton, production on machinery has become ubiquitous. But it was Kraftwerk in the 1970s that strayed from the mainstream. Their early albums, Kraftwerk and Kraftwerk 2, were loosely arranged instrumental psych-rock sessions stemming from West Germany’s krautrock scene of the late 1960s. However, the mid-seventies marked the band’s shift in sound to more electronic. 1974’s Autobahn, was full of synth sounds and glorified German infrastructure and in a way, adopted the nationalism that was haunted and lost by the politics of World War II.

Although this marks Kraftwerk’s first stop in the Alamo City, this won’t be their first run-in with the Lone Star State. In 1981 the band used the Texas Instruments Language Translator to compose tracks off Computer World. Remember the line, “I’m the operator with my pocket calculator”?

Although Kraftwerk created oracular, existential compositions on the use of computers in the world, it wasn’t until 1986 when the band first used the sequencing software, the Voyetra Plus, the world’s first professional MIDI software from NY-based Octave-Plateau Electronics which they ran on an IBM XT to create Electrick Cafe. Kraftwerk were pioneers in their own right, crafting their own electronic instruments with the help of technicians.

The band’s ingenuity continues to evolve. With their U.S. 3-D visual effects showcase, the band is schooling these laptop musicians on how to keep their audience engaged. Aaron Zimmerman, Vice President of Programming and Marketing at the Tobin told the Current, “Audience members will expect not only the music they’re used to hearing from Kraftwerk but they’re going to have a visual experience at a concert like they’ve never had.”

Kraftwerk’s music continues to be both timely and haunting as we move forward into the coming technological singularity of 2045. In a 1975 interview with Rolling Stone the band mused on Die Menschmaschine (translates to ‘the man machine’), “You cannot deny technology. … technology is still there and you have to face it and live with it.”