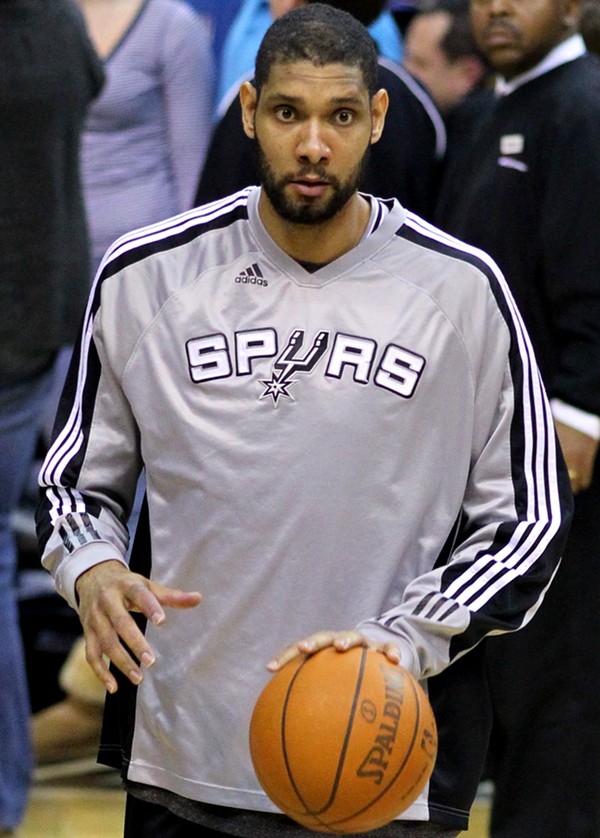 On the last evening of the Kobe Bryant farewell tour, when the star willed himself toward a 60-point performance, some of rap’s most influential names were in the house: Jay-Z, Kanye West, Kendrick Lamar, Snoop Dogg, Schoolboy Q and Anthony Tiffith of Top Dawg Entertainment were all sitting close to the hardwood as possible. From a certain light, Kobe represented the style and grace of hip-hop in a more physical medium, dominating in his lane with an energy and snarling attitude that only he could attest to. Even in retirement, he’s still getting shoutouts in new songs.

If hip-hop is the essence of cultural cool, recent retiree Tim Duncan might not be its best on-court representative. Upon the announcement that he was hanging up his shoes, op-eds glorifying his wonderful lameness bloomed all over the internet. ESPN’s Tom Haberstroh went so far as to dig up a paper Duncan co-wrote at Wake Forest called “Blowhards, Snobs, and Narcissists: Interpersonal Reactions to Excessive Egotism.” There will never be another like him.

But from a different light — the shimmer and glow of Gregg Popovich’s farewell — Duncan emerges as the ultimate NBA player to embody rap’s first and final ideal: realness. “He’s the most real, consistent, true person I’ve ever met in my life,” said an emotional Popovich. “He’s the same person — his values, his opinion of himself — as the day he came in. I remember before his father passed away, him looking me in the eye and saying, ‘I’m going to hold you responsible to make sure that when he’s done he’s the same person he is now. And in that respect, he is.”


Gregg Popovich gets emotional when talking about Tim Duncan. (via @NBATV)


Since the beginning of the form, staying real has been one of rap’s great achievements and anxieties. Someone with a cursory knowledge of Google could find a few lines from each rapper mentioned above about how to stay the same despite the money, the press and the admiration. In that respect, Tim Duncan — a man with a tattoo of Merlin on his chest and more cargo shorts and oversized t-shirts in his wardrobe than even your Dad — is hip-hop’s great emissary in the paint. And so, let’s visit rap’s best nods to the Spurs all-time best.

Gucci Mane — "Maybe It's the Juice"
Leave it to Gucci to drop a few bars that no one else can compete with. Like Duncan's casual dominance on both ends of the court, Gucci Mane is playing a different game than the competition: "You in a weak crew nigga making checkers moves / Chess moves, Tim Duncan, nigga vet moves." There's a bonus Manu line in here, too — "this lady says she know me / I'm balling like Ginobili."

Lil B — "NBA Stole My Swag"
Hip-hop's other great absurdist, Lil B values quantity over quality when it comes to his adoration of the Spurs power forward. From Hoop Life, a staple of any pickup playlist, the Based God makes his feelings toward the (married) Tim Duncan well-known: "Young Based God got bitches at the movies /
Hoop Life, Lil B, Tim Duncan groupies (Hoop Life!) / Like I said, shout out to Tim Duncan / Yeah we dunking on bitches, we got Tim Duncan groupies, too /
/ We got groupies like Tim Duncan, yeah I said it / I said Lil B is one of the best basketball players alive."

Lil Boosie — "When You Gonna Drop"
In the final lines from this Baton Rouge heavyweight, Lil Boosie considers the power of teamwork: "Can't no rapper fuck with me / Hit you from my way look like Tim Duncan, Tony Parker and Manu Ginobili."

Vintage Lil Wayne goes in on 2007's "Put Some Keys on That" — "Stop stuntin' if you balling, buy your bitch something / Stayed on the same team like Tim Duncan." Less so from 2013 Wayne on "Burn" — And I might do the Spurs sittin' on them Tim Duncan / And in the Lamborghini I do donuts like Dunkin’."

Tory Lanez — "Tim Duncan"
Whether it's "shooters in the cut" or "a check for balling," Canadian upstart Tory Lanez knows he's becoming the person he wants to be, because he is acqurinig the same things in life as Tim Duncan.