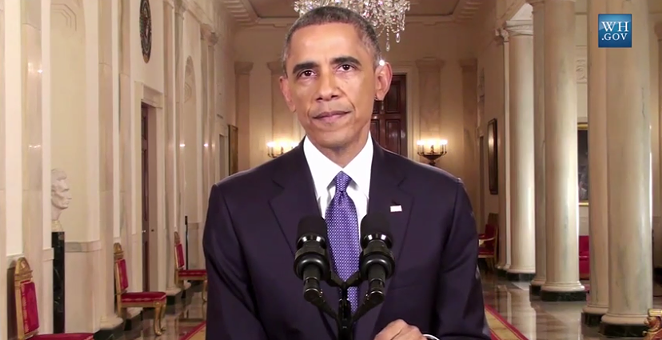 The President announced the specifics of his plan during a prime-time address, which was recorded and transcribed in its entirety by the White House.

Beyond providing “additional resources for our law enforcement personnel” at the border and expediting the naturalization process for “high-skilled immigrants, graduates and entrepreneurs,” the President promised to “take steps to deal responsibly with the millions of undocumented immigrants who already had live in our country.”

A meticulous fact sheet released by the American Immigration Lawyers Association (AILA) explains that Obama’s executive action is intended to “ensure that everyone plays by the same rules” while our country strives to repair “our broken immigration system.”

Indeed, the fundamental pillars of Obama’s order wrestle with the issues of cracking down on illegal immigration, deporting felons rather than innocuous family members and holding undocumented immigrants accountable for “the responsibilities of living in America,” as stated by President Obama during his speech.

While left-minded activists and sympathizers applaud Obama’s proactive stance on the dilemma of immigration, moderates and conservatives alike are now questioning the constitutionality of the President’s unilateral order.

One far-right critic is Texas Attorney General Greg Abbott, who will succeed Rick Perry as governor in January.

“President Obama has circumvented Congress and deliberately bypassed the will of the American people, eroding the very foundation of our nation’s constitution and bestowing a legacy of lawlessness,” Abbott said in an official statement. “Following [Thursday’s] pronouncement, I am prepared to immediately challenge President Obama in court, securing our state's sovereignty and guaranteeing the rule of law as it was intended under the Constitution."

In reaction to the intensity of the conservative right’s censure—including radicals in search of grounds for impeachment—a number of political analysts are drawing comparisons between Obama’s order and similar actions executed by George W.H. Bush and Ronald Reagan, neither of which elicited vehement responses from the Republican Party.

Nevertheless, to those who condemn the President’s decision, Obama proposes one resolution: “Pass a bill. I want to work with both parties to pass a more permanent legislative solution. And the day I sign that bill into law, the actions I take will no longer be necessary.”