An interview with Steve Moore, the Mad Drummer

Drummer Steve Moore had no idea a show he performed at an amusement park in Elysburg, PA would resurface online two years later making him a viral video sensation. Since it was first posted on June 1, 2010, the video titled “This Drummer is at the Wrong Gig” has received nearly 1.6 million views (as of June 6). 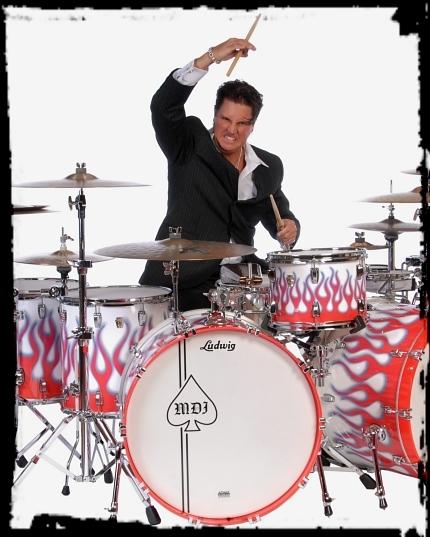 Moore, who calls himself the Mad Drummer (www.maddrummerinc.com), is featured on the video with his band Rick K and the Allnighters covering the ZZ Top song “Sharp Dressed Man.” Dressed themselves in glittery, mustard-colored tuxedos, the group doesn't look much different than any other variety show band you would see performing in a bowling alley lounge or at a wedding in the 80s. Even for the first few seconds of the song, the Allnighters sound like a typical cover band channeling Billy Gibbons and his crew. Then something happens: Moore simply goes mad.

Flailing his drumsticks around like a windmill on acid, Moore slams on his drum set without missing a beat. All attention is quickly diverted past his more traditional band mates and onto Moore who admits that long ago he “decided against the cookie cutter approach and tried to be as over the top as possible.”

During an interview with me, Moore, who has been playing with Rick K and the Allnighters since 1997, talked about his style of playing, where he pulls all the energy for his performances, and what he thinks about the online consensus that says he should find another band that matches his skill level.

When did you realize this video was online and that it had blown into such an online phenomenon?

About a week ago people began sending me emails telling me they saw the video. I didn't think much about it at first. I just assumed it was mostly drummers passing it along to other drummers. Then more and more people started passing it around and it just went nuts.

In your biography online you mention a theory you have that audiences tend to “hear with their eyes.” Can you explain that to me a bit more and how you use that in your performances?

You just said it: “In your performance.” People tend to forget that you are performing! Take Elvis for example. Don't misunderstand me, Elvis was a fine singer, but he was a great performer! Do you honestly think he would have enjoyed that kind of success had he just sat there on a chair? People want to see something at a show. If that were not the case, national artists would save millions on staging, lights, pyro, props, fog machines...all of which, have nothing to do with “music.” However, it has everything to do with a “show.”

Your style of drumming isn't usually associated with a variety show band like Rick K and the Allnighters. After 13 years with them, do you still feel like you “fit in” with the group?

I'm very grateful the video has gone viral, and I'm equally happy that so many people are getting a kick out of it. However, it was designed to be that way. It's no secret that I don't really play like a normal drummer. (Laughs) So Rick was open enough to showcase what I have to bring the table. If he wanted a “normal” drummer, he would simply hire one! He loves all that stuff. 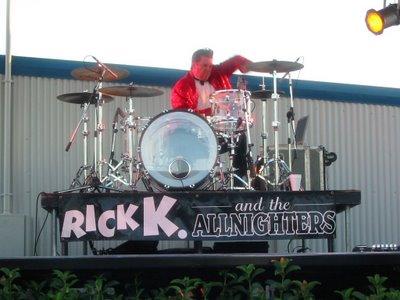 The video that is circulating is being called “this drummer is at the wrong gig.” How does it make you feel that people out there are saying you are a mismatch with your band and that you are more talented than your band mates?

Well, you have to remember, they're judging a 90 minute show, on one song. Like any show, it has peeks and valleys, up tempo stuff and ballads. It's not really fair to crucify the other guys for giving me the chance to shine a little. Keep in mind, I'm a drummer! Drummers are generally told to just sit there and be quiet. You also have to remember the band performs 200 shows a year. That's not an easy thing to make happen without some talent.

Playing these 200 shows a year the way you do with your machine-like precision, how do you keep gigs fresh for yourself?

Again, props to the other guys in the band, because I'm hell to play with. Do you have any idea how many times they've gotten blasted in the back of the head with a runaway drumstick? (Laughs) Some of that stuff is choreographed, but a lot of it just comes out on the fly. So I'm always trying new stuff, just to amuse myself. Fortunately, it seems to have amused about a million other people as well. (Laughs) How many people get that opportunity in life? I had a part in helping a million people get away from their troubles for a few minutes. How could I possibly take something that wonderful for granted? It's the greatest thing that ever happened to me!

What is the craziest thing that has happened since this video has surfaced on the internet?

For me, it was hearing that Mike Portnoy (drummer for Dream Theatre) enjoyed my playing. Portnoy is the best progressive drummer alive today. I own everything he's ever recorded. It's not easy to grab the attention of a high-profile player like that. As it turns out, he's not just a monster player, but a very nice guy as well. Too many times your heroes disappoint you. I don't care how long I've been playing drums, it's still hard not to geek out a little over Mike Portnoy! (Laughs)

Watching you play “Sharp Dressed Man” tired me out! Where do you pull all that energy from for each song?

I'm basically the poster child on what not to eat. I toss down Reese Cups like they're breath mints then wash it all down with a few gallons of chocolate milk. I'm horrible dude, just horrible! (Laughs) I'm like a “walking emergency.” Then I just go onstage and try to work it off. (Laughs) 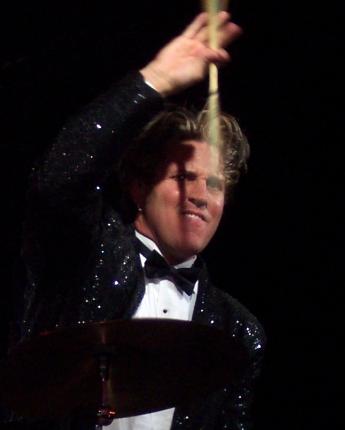 Do you still have aspirations to be the next Neil Peart or Dave Lombardo? Is that childhood dream something that will never fade?

That childhood dream will never fade, and I'll tell you exactly why. My dream is to be able to do for younger players, what Mike Portnoy did for me...period! When you give it away, it comes back every time!

What do Rick K and the rest of the Allnighters feel about your showmanship? Some people might think what you do on stage takes away from the overall performance because all eyes are on you. Has your band ever voiced any concerns like that?

No, they've never said anything like that. They're my biggest supporters. They even call me their “spectacle.” (Laughs) I'm sort of like a blind discus thrower at the Olympics. I may not win any awards, but I'll sure keep the crowd alert.