As San Antonio Contemplates a Pricy Transportation Plan, It Should Remember the Street of Broken Dreams 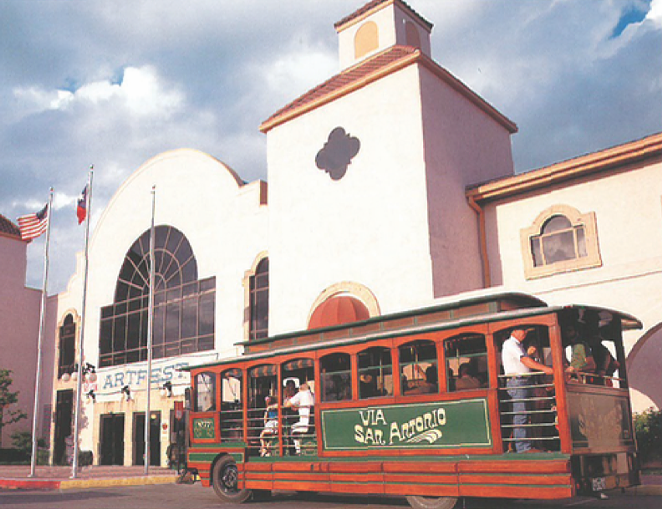 Collection of Heywood Sanders
Editor’s Note: The following is City Scrapes, a column of opinion and analysis.

When I’m teaching at UTSA’s downtown campus and need to illustrate the potential pitfalls of urban economic development, all I have to do is point across the street, to the university’s Monterey Building and the Frank Wing Municipal Court Building to make my point. Or perhaps straight down. Frio Street, after all, is San Antonio’s boulevard of broken dreams, a physical monument to decades of overblown rhetoric, market realities and public policy failures.

It was front-page news in early January 1980 when Vice President Walter Mondale, visiting San Antonio, announced the approval of an $18.8 million grant to revitalize the Vista Verde South area on the near west side of downtown. Mondale was expansive about the project’s promise, describing almost $70 million in new private investment that was to come to the area, after demolishing the remnants of the city’s former red light district. And with that investment there would be the creation of at least 1,700 new jobs, many of them aimed at San Antonio’s unemployed or low-income workers.

The centerpiece of the development would be a new manufacturing plant for Control Data Corp., among the nation’s premier mainframe computer firms. Even before the grant was announced, city officials were touting plans for Control Data’s investment, with then councilman Henry Cisneros promising the project would “eventually employ 2,000 people and train hard-core unemployed.” Control Data’s first commitment was a plant at 515 South Frio St. for its Magnetic Peripherals subsidiary, making computer hard drives, which opened in mid-1981. Shortly after came a larger plant for Control Data just up the street, at 401 South Frio St. Then the computer company built one of its Business and Technology Centers, a small business incubator, in 1985.

The success of Vista Verde South — and Henry Cisneros — drew national attention. A March 1983 article in the New York Times, “San Antonio Steps Out of Texas Shadows and Leaps for a High Tech Future,” reported on the city’s new electronics plants, including Advanced Micro Devices, Farinon and Tandy in addition to Control Data. “There are plans to expand the [Control Data] plant to 1,000 employees, although Mr. Cisneros is urging 2,000,” the article noted.

But problems began to appear soon after. Control Data announced it was selling the Magnetic Peripherals plant to local company Texas Mil-Tronics in August 1985. Two years later, Control Data put its main plant at 401 South Frio up for sale and effectively abandoned San Antonio. The company couldn’t find any buyers, so in March 1989 the city purchased the plant and adjacent land for use either as a new site for Alamo Iron Works — displaced by the Alamodome — or a new municipal courthouse. And, so, the factory was turned into the Municipal Courts building. The Magnetic Peripherals plant was also purchased by the city for use as SAPD’s Central Patrol Substation. As for the Business and Technology Center, it was ultimately bought by UTSA as the new home for its College of Architecture.

Then there was the Fiesta Plaza shopping mall, memorialized by the Los Angeles Times in 1992 as the “Pink Elephant Cisneros Can’t Forget.”

“Weeds are pushing up through the broken asphalt of the parking lot,” the Times wrote, “and written on one wall is a now-fading word once meant to express hope for the failed project and impoverished neighborhood behind it: ‘Ole.’” The article went on to quote local newspaper columnist Rick Casey’s observation that problems with the project were evident from the start: “Those problems were ignored because of political imperative… Henry wanted to have this showcase on the near west side.”

The Fiesta Plaza site is today the home of UTSA’s downtown campus.

There are a host of lessons to be learned from Vista Verde South. The grand visions and promises of local politicos often don’t work as planned. Big public investment deals that require public money up front need to be carefully analyzed and vetted with full public involvement. “Political imperatives” invariably come up against market realities — and when they do the market wins.

Today, as we talk about a grand vision for transportation improvements with a very large price tag, pressed by many of the same players in the Vista Verde saga, San Antonio would do well to recognize and learn from those lessons.