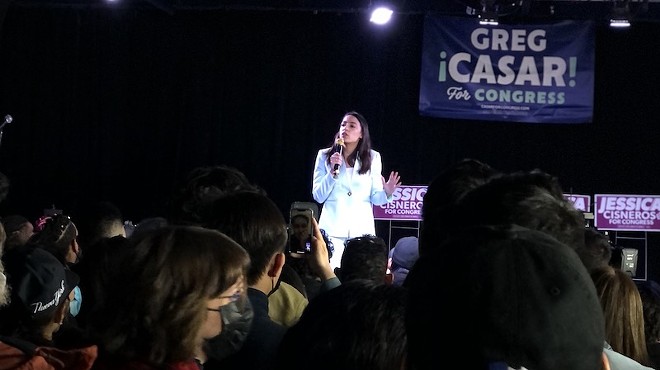 
From her first words harkening back to her days organizing in Texas as a teenager, the New York Democrat repeatedly hit on the importance of her trip to San Antonio, which comes two days before early voting for the March 1 primary.

“This state is going to change the country,” Ocasio-Cortez said. “I’ve believed that since I was 17 years old.”

Cisneros and Casar also led with a vision of Texas on the precipice of a long-building progressive wave.

“We know a better world is possible,” said Casar, who's running to represent District 35. “We know that the world as it stands is not as it must be. And we know that progressive change is not just for some faraway place, away from Texas — that it is rooted here in San Antonio. … This is home, and we’re not giving up."

Progressives are looking to Casar and Cisneros, both children of Mexican immigrants, to help energize a movement that — despite a growing presence in Congress — has flagged since Sen. Bernie Sanders’ defeat in the 2020 Democratic presidential primary.

Casar is running for the seat being vacated by Rep. Lloyd Doggett to represent a Democrat-leaning district that stretches from downtown San Antonio north to Austin. Cisneros aims to unseat nine-term Rep. Henry Cuellar, a fellow Democrat, in the 28th District, which spans from San Antonio south to Laredo.

Both candidates, like Ocasio-Cortez, support universal healthcare, a Green New Deal, expanded voting and reproductive rights and ending the corporate funding of campaigns. Both have received a host of local and national progressive endorsements in their races.

Casar, a former organizer with the Workers Defense Project, became Austin’s youngest-ever member of city council in 2015 and spent the next seven years leading efforts to build affordable housing, pass a paid sick leave and reform public safety in the capital city. He was also a noted advocate for the rights of Austin’s homeless population, for which he has drawn criticism in this race.

Cisneros is a different story. The 28-year-old Laredo native was practicing immigration law in Brooklyn when she decided to move back to South Texas and challenge Cuellar in 2020. She fell short, but only barely — losing by fewer than 3,000 votes. Last summer, she announced her second run.

Cuellar has been a longtime target for progressives. The South Texas congressman has close ties to the oil and gas industry. What's more, he's received past endorsements from the National Rifle Association and a political action committee founded by the Koch brothers. 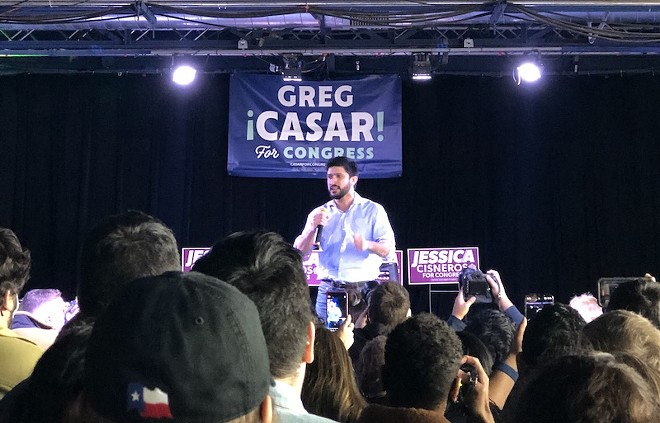 Cisneros got a boost last month when FBI personnel raided Cuellar’s home and campaign office in Laredo, reportedly as part of a federal grand jury probe investigating the congressman’s ties to oil-rich Azerbaijan.

Cuellar has been dogged by corruption allegations going as far back as the primary campaign that narrowly won him his current congressional seat in 2004.

In a video filmed outside of his childhood Laredo home following the recent raid, Cuellar said he was fully cooperating with law enforcement and that the ongoing investigation would show no wrongdoing on his part.

On Saturday, Cisneros called her opponent “one of the most entrenched corporate politicians in the country,” while Ocasio-Cortez spent the better part of 10 minutes going after Cuellar for the failure of the Build Back Better Act in Congress and attacking his record on labor and reproductive rights as well has his ties to special interests.

Ocasio-Cortez has longstanding connections to South Texas, in particular to the Maxwell-based National Hispanic Institute. The congresswoman has also visited Border Patrol facilities in the state multiple times, and raised more than $5 million on behalf of Texans after last February’s winter storm.

Her weekend trip to Texas, which will continue tomorrow with two stops in Austin, is largely focused on organizing Latino voters. That effort comes as some in South Texas shifted to their support to Trump during the 2020 cycle.

“If we send a Democrat who doesn’t give a damn about people, why would we expect people to vote for that person?" Ocasio-Cortez said, addressing that shift. "How can we win? How can we win when we send Democrats who don’t support childcare or healthcare or immigrants?”

Anahi Tapia Torres, an organizer with Unemployed Workers United who drove in from Austin for the rally, agreed with Ocasio-Cortez, saying that any narrative about Latino voters focusing on party labels is counterproductive.

“Latinos very much need systemic change,” she said. “Latinos are working class. We need jobs, we need healthcare … we need to talk about issues.”

Protesters in Donald Trump gear and waving pro-police flags massed on the street opposite Paper Tiger to protest the event.

Despite those detractors, the tone inside the Paper Tiger remained energetic and upbeat — exactly what attendee George Rice, 72, wanted to hear.

“I’ve been a lefty all my life, since I got out of the Army,” he said. “And I am very pleased to see this new generation of leftists come up. It gives me a lot of hope.”

Cisneros’ campaign launched a canvassing effort after the rally, hoping to translate that energy into a strong push in the early voting period.

“You all are doing a lot, and we have to make sure that this becomes a springboard for the state,” she said. “That’s why I’m here — for the long game. It’s going to happen. Texas turning blue is inevitable. It will happen.”

“Change has been coming for a long time,” she said.