On Friday, Starbucks workers in San Antonio will rally in Labor Plaza to demand management at long last bargain with unions in good faith. 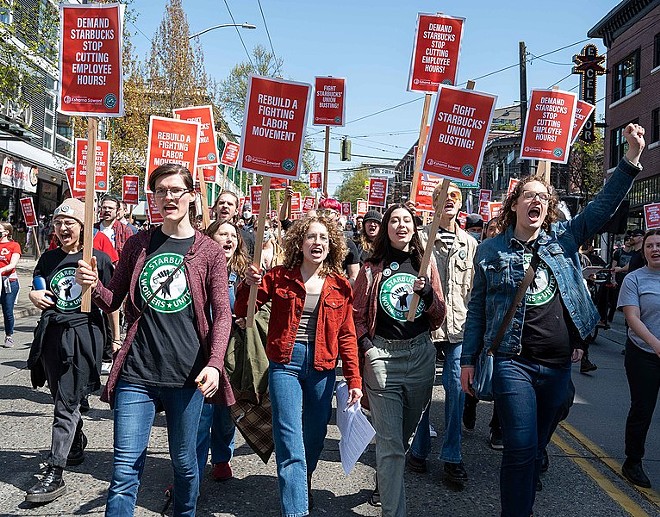 "There is no ethical consumption under capitalism.” — Popular leftist meme

What a difference a year makes. In November 2021, not one single solitary Starbucks retail store had formed a union. Today, more than 250 have voted to do just that, and this despite unremitting opposition from the higher-ups.

Until the workers themselves own and operate the factories and offices and other enterprises our society relies on to remain semi-functional, unions are what we've got. And for approaching a century now, thanks to the New Deal, workers possess the legal right to organize together and bargain for better wages and safer workplaces. At least in theory.

In reality, Big Business and Big Government often conspire to rewrite that deal on the fly. For example, the Biden administration this month revoked the right of railway workers to strike, imposing a contract that most union members rejected because it didn't include adequate sick leave. Both Sens. Bernie Sanders and Ted Cruz — strange bedfellows indeed — unsuccessfully voted against the federal intervention, with Sanders quipping to Cruz, “I knew you were a socialist.”

In a similarly dispiriting gut punch, Starbucks has brazenly outdone its already well-earned reputation for union-busting. With a quarter-million employees, the ubiquitous coffee chain currently holds about $3 billion in cash on its balance sheet. Yet Starbucks has illegally withheld raises from unionized workers and fired them with alacrity, according to the woefully unfunded National Labor Relations Board (NLRB). To date, given blatant corporate recalcitrance, not one contract negotiation has been finalized.

At noon Friday in San Antonio's Labor Plaza, Starbucks workers and their allies will meet in a show of solidarity to demand the brass at long last bargain with unions in good faith. Starbucks Workers United has called upon customers to boycott the company and not purchase any gift cards over the holidays. No more feet-dragging, no more rule-flouting. No contract, no coffee.

This might be a great opportunity to refer to the handy map of local coffee shops put together by the Current.

In the 1930s, waves of strikes disrupted the beleaguered U.S. economy, still in the throes of the Great Depression. Winning landslide after landslide, President Franklin Roosevelt set out to save capitalism from itself and forced bosses to swallow humble pie by granting long-overdue concessions to the labor movement.

Fast-forward to 2022 and Biden laughably calling himself the “most pro-union president in American history” while eviscerating the right to strike with a pen stroke and slapping corporations such as Starbucks on the wrist for their violations of settled labor law.

Considering the resources they’re up against, the NLRB should really be a billion dollar government agency. And the mandate is there, since nearly three out of four Americans approve of unions — the highest level of support since 1965.

“Corporate executives and lobbyists often point out that the percentage of U.S. workers in unions has sunk to 10% from a peak of 35% in the 1950s, and they say this shows that American workers don’t want unions,” labor journalist Steven Greenhouse noted, writing for Slate. “They’re wrong. Several studies have found that around half of America’s nonunion workers — around 70 million people — say they would like to join a union if they could. But there’s a major reason they aren’t joining: the sophisticated and often punitive corporate tactics that discourage and frighten workers from unionizing.”

In spite of retaliatory threats, Starbucks likes to call its workers "partners." That implies the business belongs as much to the employees as to management and the shareholders. Which is bullshit — a gloss decorating exploitation with a smiley face.

Still, half a loaf is better than no bread. But keep abiding by that maxim and we’ll always end up settling for crumbs. Now’s the time to demand something more perfect.