The incident is a hint of what's to come as the U.S. right imposes aggressive abortion restrictions. 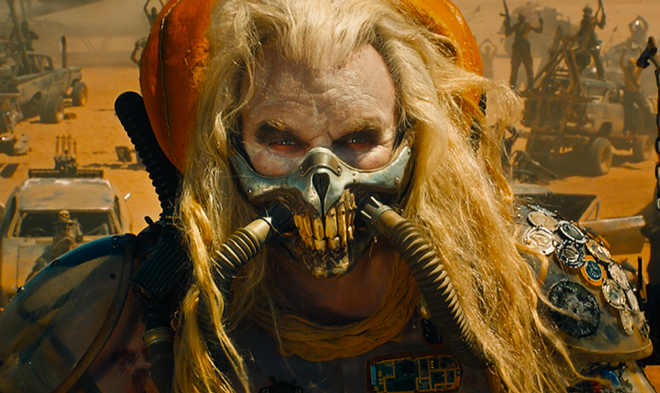 Warner Bros. Entertainment Inc.
Warlord Immortan Joe from Mad Max: Fury Road wanted to turn women into "breeders." So do many U.S. conservatives.
Bad Takes is a periodic column of opinion and analysis.

In Mad Max: Fury Road — the post-apocalyptic blockbuster from back when President Trump was but a gleam in Steve Bannon's eye — great importance is placed on "breeders." The cruel dictator of the desert wasteland, Immortan Joe, owns a stable of these young women and forces them to bear his progeny.

For those who believe we're already living in the End Times, perhaps it makes eschatological sense that religiously motivated opponents of a woman's right to choose have been in survival mode lately. Their apparently mindset: we can't allow our breeders to decide for themselves, now can we?

Last Thursday, the Starr County Sheriff's Office in Rio Grande City arrested 26-year-old Lizelle Herrera on the charge of murder. In the grand jury indictment, she was accused of "intentionally and knowingly cause the death of an individual by self-induced abortion."

"What is alleged is that she was in the hospital and had a miscarriage and divulged some information to hospital staff, who then reported her to police, then she was arrested, and her bail [was] set at half a million dollars," explained Rockie Gonzalez, chairwoman of abortion-aid group La Frontera Fund, cutting to the chase.

Herrera has since been released and the district attorney pledged on Sunday to dismiss the case, stating that "based on Texas law and the facts presented, it is not a criminal matter." But as University of Texas at Austin Law Professor Steve Vladeck told Texas Public Radio, the entire episode is "an ominous portent of what things are going to look like on the ground in states that have aggressive abortion restrictions."

Journalist Melissa Gira Grant earlier this month explained that the American right's current anti-abortion crusade is part of an effort to build Christian nationalist power. "Republicans in states like Alabama and Missouri are considering laws that would expand the Texas-style anti-abortion vigilantism of Senate Bill 8," she said.

The bill to which she's referring is the so-called Heartbeat Act, which enables virtually any private citizen to sue anyone who helps a Texas woman obtain abortion care — whether they're a clinician, a family member or even a ride-share driver. Not surprisingly, this has compelled thousands of women to flee Texas in search of what ought to be constitutionally protected medical care.

In her famous essay "A Defense of Abortion," published two years before Roe v Wade, the late philosopher Judith Jarvis Thomson used several thought experiments to tease out the following irony: why is it that those who call abortion "murder," even in cases of rape, seem to be the same folks who'd shoot you for trespassing on their lawn and claim "justifiable homicide?" If a man's home is his castle, can a woman at least choose the invitations she accepts to her own body?

Leave it to historians, however, to come up with an answer and some much-needed context. Dartmouth College History Professor Bethany Moreton offered this analysis last summer:

"The very concept of economy did not begin in the marketplace, but in the patriarchal household. We cannot talk of 'family values' without invoking relations of extraction and possession: The Latin familia designates 'the servants of a household,' and its English equivalent doesn’t begin to acquire its present sense until the sixteenth century. There is no economic relationship that is not also about domestic authority and lineage; there is no 'social' or 'cultural' or 'family values' conservatism that is not also asserting the right to claim and distribute property. Seen in relation to the dizzyingly diverse forms of kinship that have sustained humankind, these relations among sex, inheritance and property are the aberrant artifacts of a particular fantasy of perpetual self-possession."

That's Immortan Joe-style patriarchy for you, replete with rugged Christian machismo, and one sure metric of dystopian decline is the extent to which women are shoved back into animal cycles of reproduction by men who will never face the weighty decision of whether to terminate a pregnancy. Voters in the upcoming midterms need to send a message, loud and furious, to Texas' one-party GOP rule that the empowerment of women is non-negotiable.