Bad Takes: The rabid right believes the Second Amendment has no limits — not even nukes 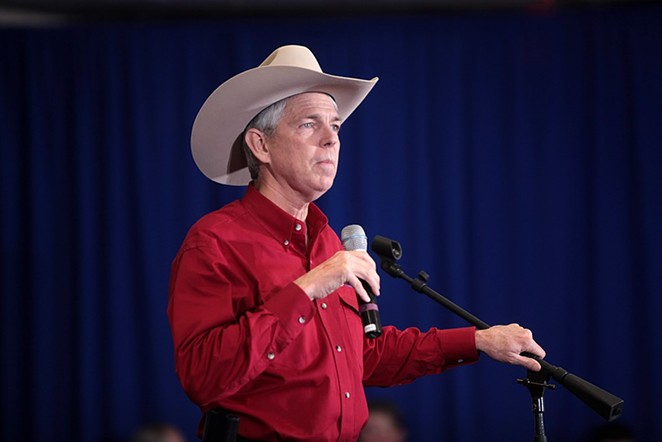 "Under no pretext should arms and ammunition be surrendered." — Karl Marx and Frederick Engels, Address of the Central Committee to the Communist League, 1850

Private citizens have the right to stockpile nuclear weapons under the Second Amendment of the U.S. Constitution. Or so says David Barton, the former vice chair of the Republican Party of Texas and director of Ted Cruz's 2016 presidential super-PAC. Here's Barton's unedited quote on the WallBuilders podcast earlier this month:

"If you've been trained with responsibility and morality and the concept of when and where you use them — the Founding Fathers are trained extensively in the concept of defensive warfare — you don't start anything. Now, if somebody else starts it, you can take it on, but you don't start it. I don't care if my neighbor has a nuclear weapon, as long as he has that defensive concept that he will never use that unless it's being used against him."

How comforting that Barton didn't defend a first-strike nuclear policy, just mutually assured destruction in the unlikely event one of your fellow 260 million American adults happens to step out of line. I'm sure we're all capable of abiding by Scout's honor when possessing weapons that can level entire cities and render whole regions of the globe uninhabitable.

Must we repeat the well-worn cliché that the Constitution is not a suicide pact? Well, yes. Evidently we must when dealing with well-respected figures in today's GOP. If the logical conclusion of your interpretation of our founding documents makes the preservation of human civilization functionally impossible, it may be time to rethink that interpretation. And if you're a gun enthusiast reading this who cannot, right now, come up with a reason why what Barton said above is indubitably batshit, maybe consider sitting the next few elections out.

The underlying principle of his facially absurd stance is far from a fringe belief exclusively professed by survivalists eating insects out in the woods somewhere. It's repeated often by potty-trained Republicans: "Whatever weapon the federal government has, I should have a right to have as well."

Wouldn't you love to be the police officer tasked with enforcing a warrant in such a libertarian paradise?

Barton would even overturn late Justice Antonin Scalia's precedent in the 2008 Heller decision that enshrined in law an individual's right to own types of firearms that are "in common use at the time" and explicitly upheld the prohibition of uniquely "dangerous and unusual weapons."

"The Second Amendment does not protect those weapons not typically possessed by law-abiding citizens for lawful purposes, such as short-barreled shotguns," according to the decision.

For most of us, purchasing nukes is not only unusual but slightly cost-prohibitive. So, the upshot of Barton's bad strict constructionist take on the Bill of Rights would mean allowing shadowy hedge funds to effectively become nuclear powers. Billionaires as a class have increased their coffers by more than $2 trillion during the pandemic. That could fund quite the arsenal. If you enjoy oligarchy now, wait until it goes thermonuclear!

Self-defense from home invasion, hunting and recreation seem like three non-fruitcake reasons to argue for gun ownership, but alas, gun fanatics, following the marching orders of the National Rifle Association, feel the need to add a fourth: the ever-looming armed rebellion against tyranny, which will necessitate going toe-to-toe with the most technologically sophisticated and powerful military in history.

This is typically the point in the conversation when the example of Vietnam's pyrrhic victory against French and American colonialism gets trotted out as proof that a low-tech guerrilla insurgency can check the U.S. Armed Forces. First off, both China and the Soviet Union provided military aid to the North Vietnamese, who had possessed submachine guns and anti-tank RPGs to arm the Viet Cong. Neither of those are currently legal for your uncle's cosplay militia to pick up at Walmart.

The great irony here is that it's the rabidly pro-gun cadres who pose the most pressing threat to U.S. democracy today. That's a point raised by Ryan Busse, a former firearms executive and author of Gunfight: My Battle Against the Industry that Radicalized America. He detailed the danger during a recently appearance on The Daily Show with Trevor Noah:

“There’s a couple different flags that we saw on Jan. 6. We saw Trump and American flags, and then the other flag we saw were the ‘Come and Take It’ AR-15 flags. Right-wing political radicals in this country now use guns as the central symbol of their identity. It’s a dangerous thing. This is authoritarianism at its formative stages. There are millions of responsible gun owners in this country who love to shoot with their kids and hunt and do all the things that I love to do, and believe in the right to self-defense. But this idea that guns are somehow the symbol of some right-wing political movement — that’s dangerous 1936 Germany stuff. It’s frightening.”

More than 300 U.S. residents are shot daily, and more than 100 of us die from those wounds, while the number of mass shootings has increased dramatically since Columbine. It's worth talking about common-sense proposals such as closing the private sale exemption, instituting universal background checks, learning from successful gun control measures adopted by free societies elsewhere and enforcing laws already on the books intended to prevent domestic abusers from packing.

But in order to have a rational discussion on this controversial topic, it's vital that the prospect of mushroom clouds periodically dotting the landscape of our residential communities be a non-starter — and that any credibility still held by high-caliber wackos like Barton be judiciously bought back and safely disposed of.