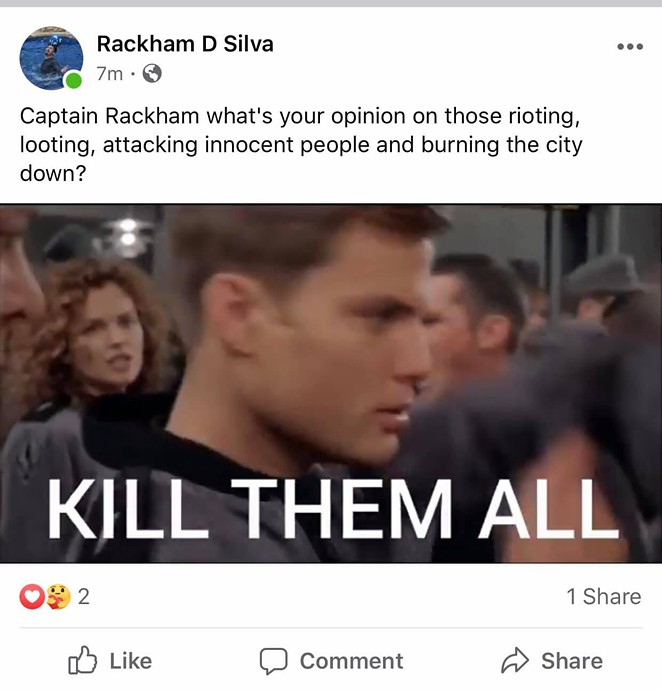 Facebook / Geena Garza
The Bexar County Sheriff's Office has placed a deputy on administrative leave and yanked his Texas Peace Officer's license while it investigates a now-deleted Facebook post that appears to advocate killing looters.

In an online statement, Sheriff Javier Salazar said the deputy, who worked at the jail, faces an internal affairs probe and has surrendered his badge, credentials and county property.

Although Salazar didn't identify the deputy by name, a BCSO spokeswoman confirmed that the investigation involves a deputy named Justin Silva. Screen captures of the offensive Facebook post shared on social media show it was posted by a user going under the handle "Rackham D. Silva."

"Captain Rackham, what's your opinion on those rioting, looting, attacking innocent people and burning the city down?" the post reads, accompanied by an image from the film Starship Troopers emblazoned with the text "KILL THEM ALL."

It's worth noting that in the clip the meme references, the character Johnny Rico is talking about killing "bugs," the insectoid aliens against which humanity is pitted in seemingly endless war. It's hard not to view the clip without drawing the inference that protestors — who are speaking out against their dehumanization — are something other than human.

As additional irony, Starship Troopers director Paul Verhoeven has made it clear that the film carries an anti-fascist message, going so far as to borrow from Nazi film The Triumph of the Will in the propaganda reel at its opening.

"The post ... is not only extremely inappropriate and offensive but mentions killing people who are 'rioting, looting, attacking innocent people, and burning the city down,'" Salazar wrote. "I can assure you that this post does not represent the views of the BCSO or any reputable law enforcement officer. Obviously, those found committing illegal activities do face arrest, but the notion of killing anyone without justification is ludicrous. The BCSO will continue to support and protect peaceful protests."

Silva was also one of six deputies investigated for a brawl at a party in June 2017, according to an investigation by TV station News4. However, it's unclear what disciplinary action department officials took over the incident.

The Current has requested all of Silva's disciplinary records from BCSO.

Although the deputy's job at the jail doesn't include public interaction, Salazar said the Facebook post is "quite troublesome for anyone who wears a uniform or badge." The deputy will remain on leave through his investigation and potential punishment.

"The punishment range could include anything up to termination as a penalty," Salazar added.